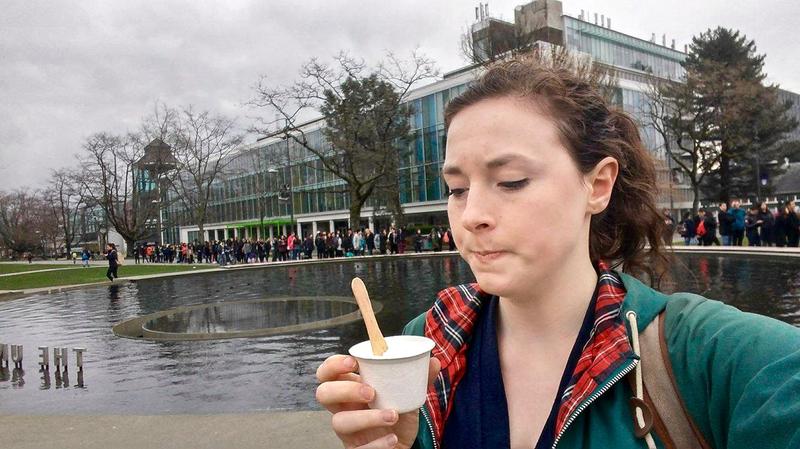 Even though I didn't give up, I somehow still didn't win. Bailey Ramsay

There are two types of students on this campus — those who line up for over an hour and a half for two ounces of ice cream and those who take photos of them.

With a previous article of ours reaching 8,520 views, 945 comments and 500 Facebook likes, it's not surprising that the line for free Rain or Shine ice cream stretched all the way from Martha Piper Plaza's fountain to past Triple O's.

While an estimated 400 students lined up at around 3 p.m. — a half hour before the event officially began — they had the ultimate test of patience as ice cream wasn't handed out until about 3:45 p.m., which was 15 minutes after the event was supposed to start. The only movement in the line was caused by those wise enough to abandon ship early.

“We should have left right away,” said a student in the line ahead of me. “But it's too late now... We're stuck.”

Everyone poked their heads out of the line to see if it was moving, but no one was walking away from the tent with ice cream. Instead, members of the AUS took turns for the entire hour and a half duration taking new profiles for each other in front of the fountain while 800 hungry students shot them death stares in the background.

“London Fog is all gone! It's over!” chanted the AUS volunteers as they ran up and down the line.

You could physically see some people's spirits leave their bodies. When they announced the Honey Lavender was gone five minutes later, rumours of casualties floated around Main Mall. Promises of hotdogs and cotton candy, however, were delivered from the volunteers to raise spirits.

There were no hotdogs. There was no cotton candy. The cake is a lie.

When I had finally gotten my ice cream, my cup was only 2/3 full of melting ice cream. Two ounces at most. With 600 scoops available, there will definitely be some students who walk away from the ordeal less fortunate than me.

“I'll just wait for the Rain or Shine on campus to open,” said one wise yet smug woman who walked by the line.