Alan Ehrenholz did an AMA and here’s what happened 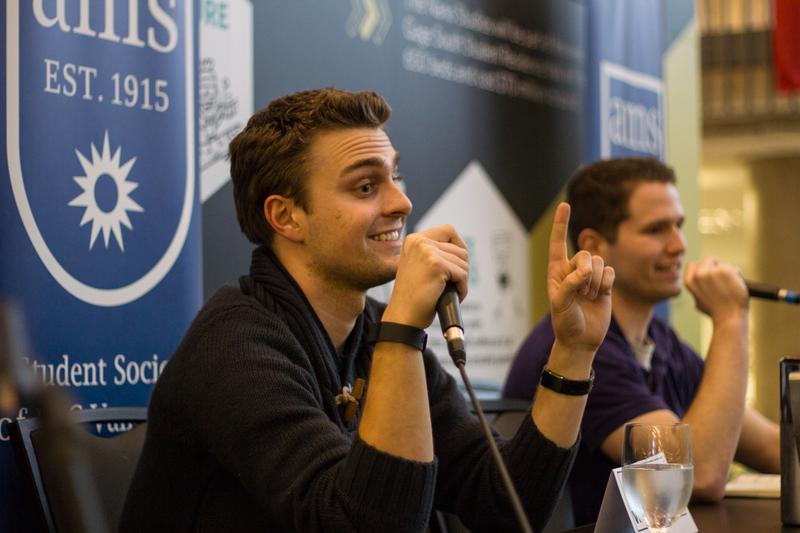 This past Sunday, AMS President Alan Ehrenholz did an AMA on Reddit. He discussed everything from the student experience with the AMS to commuter issues to binge drinking.

He was asked some serious, hard-hitting questions:

“What’s your plan to get a chipotle on campus?” –neilrp

To which he disappointingly replied, “currently, there are no plans to bring a chipotle to campus; however, are [sic] new Mexican themed restaurant, IwanaTaco, has just opened up in the basement of the AMS Student Nest, next to Grand Noodle Emporium.”

I personally liked Santa Ono’s response better regarding this issue — Iwana Taco is just not the same standard as Chipotle.

“Alan, how does it feel being a puppet to a piece of concrete? Do you have ask the cairn for guidance before making decisions? Does it answer back?” –geezer_pleezer

“The Mini Cairn in my office and I have a lot of dialogue on major AMS related decisions.”

There were also a few questions about him running as “The Cairn” before really jumpstarting his platform:

“At what point did you feel that you needed to start taking the AMS President election seriously? i.e. No longer be The Cairn and actually be Alan with a platform.” –JToews19

“It was the Monday that voting opened. Seeing just how many students, even though I had not yet released a platform, were putting their faith in me and voting for me, that made me stop and think about what I was doing. At that point, I began to take the election very seriously and put together the campaign materials, platform, etc.”

“Why did you decide to run as The Cairn instead of as yourself? What do you think about meme presidencies in general? I voted for you because your past experience seemed to make you the best candidate for the job. But I can’t help but think: what if you had been a shitty, unqualified candidate, but won anyways because it was funny? It certainly wouldn’t be the first time history that's happened.” –EaterOfFromage

“Originally, I had intended to graduate this year (I have 24 credits remaining in my degree), and had a very exciting engineering internship for the summer with the opportunity to stay on after graduation. With this in mind, I was prepared to move on to the next stage of my life, where I would be an Engineering in Training and working toward obtaining my P.Eng. In terms of ‘meme presidencies,’ I think they can add excitement and humor to an election, but I do not think what happened last year will happen very often. I think that the students at UBC are very well educated, and will always vote for who they feel is the most qualified candidate.”

He also crushed all of my hopes and dreams in a single sentence:

“When we will finally get a slide in the Nest?” –ubctroll

“This decision was made before my time with the AMS, however, as far as I understand, it was not possible or not feasible to insure a slide within the building.”

He addressed some difficult issues but not before someone else addressed them first:

“I heard a rumour (from a friend in engineering) that back in 2015, the EUS flew you out to Saskatchewan to rep our engineering faculty at a meeting of engineering students from across Western Canada. And that during the main proceedings of that meeting (during the early afternoon), you ingested enough hard liquor to cause you to black out, rendering you unable to represent the interests of our university. Is this true? And if so, can I help you prepare for the next AMS Council meeting?” –UBCSeparatist

This question was one of the first asked, but one of the last answered. Jeanie Malone, former EUS President and current BoG student representative, jumped to Ehrenholz’s defense before he could reply:

1. We were a mess. Our delegates did a poor job representing us (as described above). We also had polarizing views year to year which was frankly just not very effective. I’m also pretty sure we remain the only school to file equity complaints against ourselves.

2. There ARE issues with drinking culture that made me personally not want to send delegates. The WESST EM I attended included two people being iced and the WESST Rules Of Life (you don’t make friends with pants on!) being announced during breakfast.

3. There’s a pretty toxic atmosphere towards UBC-V (like, the incident you’re describing happened two years ago and you’re still yelling about it on reddit so clearly there’s some grudges being held).

We were not using our student fees effectively. The net benefit to our student body was low; with these factors we obviously couldn’t learn much from other schools and our EUS council assessed that the handful of delegates who did personally benefit were not enough to spend $1000+ conference fees on.

So we left. And with posts like this still coming up, I’m damn glad of it.”

“Yes, the incident you mention is true. I’d like to tell you why it is significant to the person I am today. First, I did overindulge in drinking, and in my case, unfortunately missed an important vote because of it. It is something I deeply regret. Like anyone else, I’ve made mistakes in my life and my goal is always to accept responsibility and to learn from the experience. I’m a different person now than when this happened two years ago. In fact, the incident has increased my ability to make better choices, to act smarter and more wisely in my life, and to think through the long-term consequences of all of my actions. As AMS President, I keep the needs of UBC students foremost in all of my decision-making and represent them with integrity at all events. I feel grateful to stand up for students, and do my best to honour this role and responsibility daily.”

If you are interested in reading the rest of the thread, you can do so here.