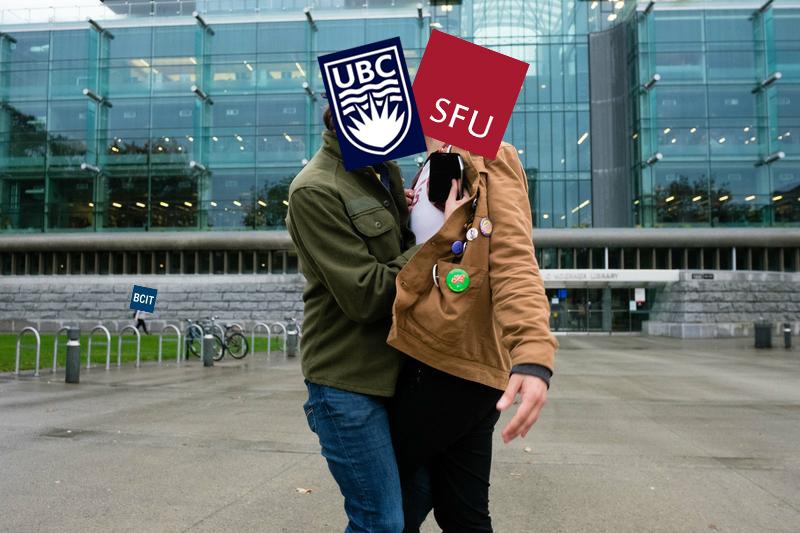 Our very tame Ubyssey meme to add to the war. Natalie Morris

If you’ve seen an influx of memes on your Facebook newsfeed making fun of UBC or SFU, do note that this isn’t a coincidence or by chance — there’s an all-out meme war going on between the two universities.

The first few shots were arguably fired by us when a poster on UBC Confessions posted a picture of a “garbage truck” driving around downtown Vancouver. 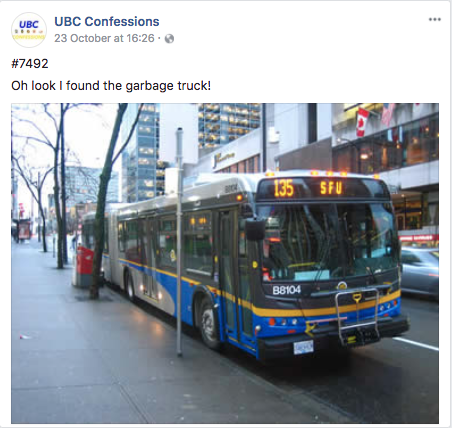 The inciting incident of the meme war Screenshot/UBC Confessions

A week and a half later, SFU Confessions decided to go right for the jugular and call UBC out on an issue that it admittedly has a terrible history of. 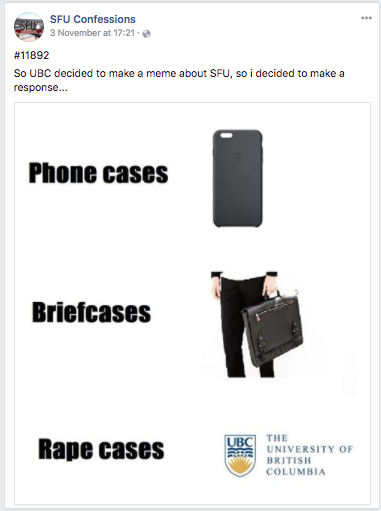 A few days later, someone on UBC Confessions fired back with something that many UBC student from BC would have related to back in Grade 12. 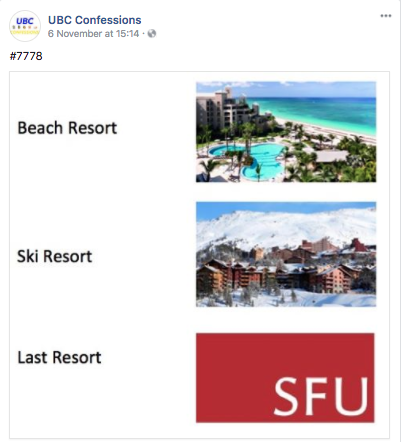 By the next day, both UBC Confessions and SFU Confessions were filled with memes attacking the opposite university. 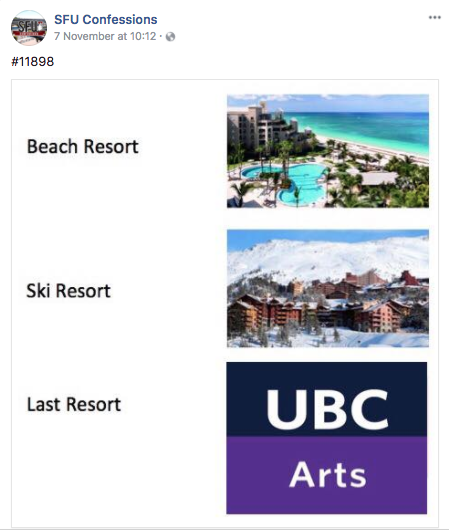 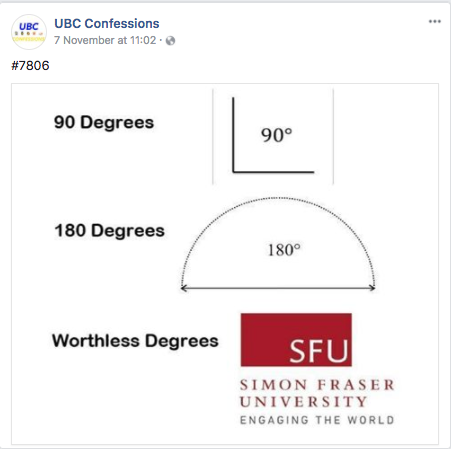 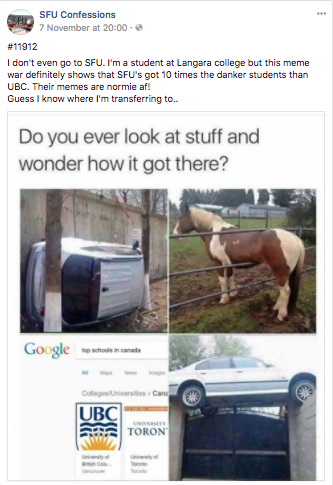 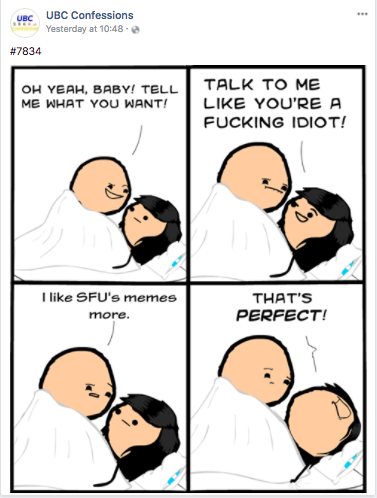 The war has promoted alliances between faculties… 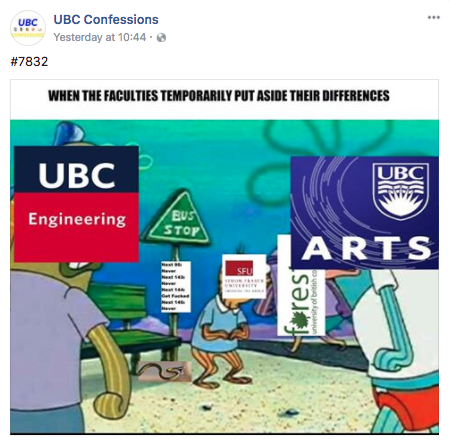 …while other, smaller universities are getting caught in the crossfire. Nobody is safe — not even Douglas College. 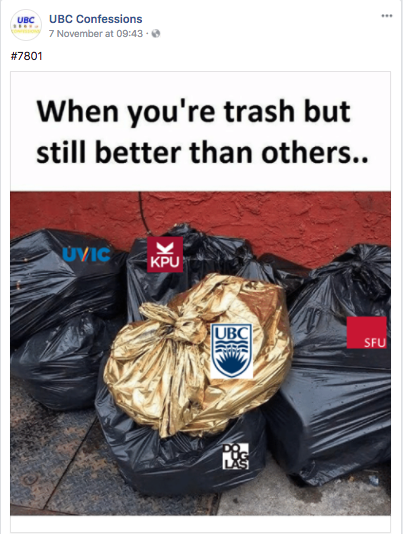 Even BCIT is trying to join in! 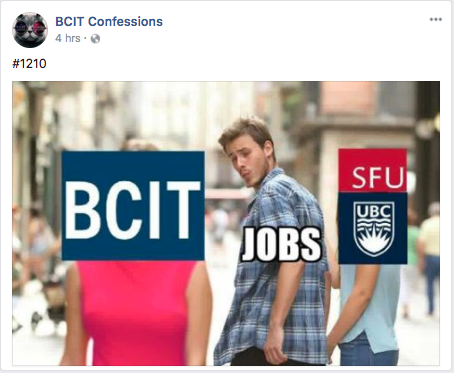 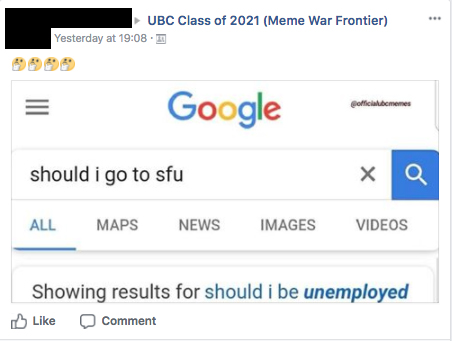 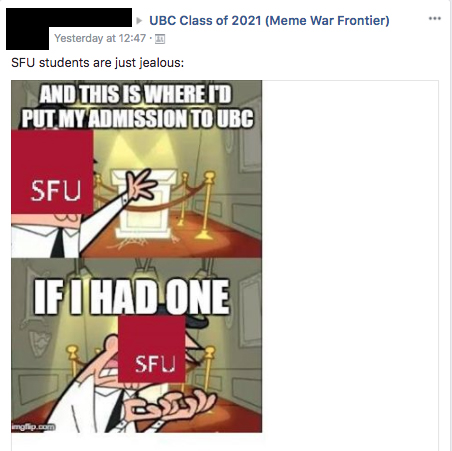 So what exactly is each university criticizing each other for? Over at UBC Confessions and the UBC Class of 2021 group, the general attack line is that SFU students couldn’t get into UBC, so instead they’re stuck at SFU, no matter how hard they try to transfer.

BCIT’s main argument is that their programs will give jobs to graduates while UBC and SFU grads will be unemployed — however, nobody cares about BCIT, so their contributions don’t exactly matter.

Although he’s the admin of the UBC Class of 2021 Facebook group, Luc Briede-Cooper’s thoughts on the outcome of the war might disappoint UBC students.

“I think SFU won the war because UBC’s meme quality was low,” he said in a statement to The Ubyssey. “Most of the memes are ‘reversible’ and not unique to SFU. That paired with UBC not posting as many [memes] means they had higher volume and quality. Why? I think they had to dig deeper into things unique to UBC since they don’t have as much of a reputation as ours to fall back on.”

You know what that means, UBC — step your game up.