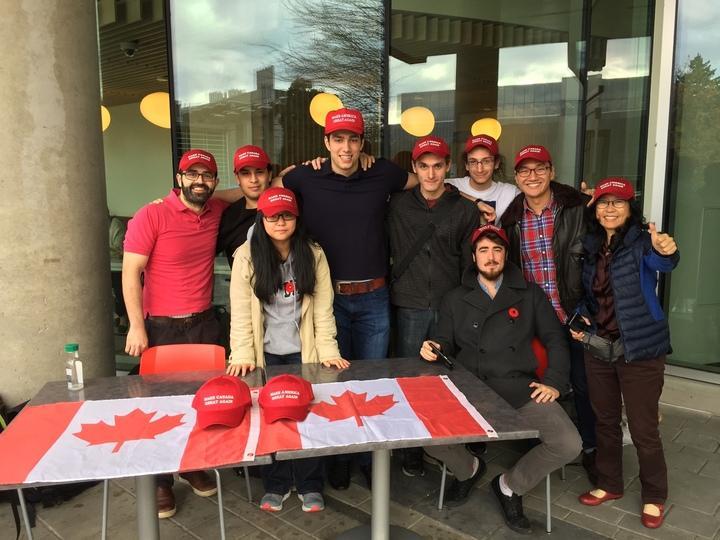 Cooper Asp, the communications officer of the UBC Free Speech Club, held an AMA session on the UBC subreddit this week under his Reddit username of coop2478. Asp said that given the recent article in The Ubyssey and other conversation threads online, the Free Speech Club “thought an AMA might be useful for everyone.” With an overwhelming 453 comments, it's clear that people had a lot of questions. Here's a recap featuring some of the most popular:

In what ways and by whom is freedom of speech being violated at UBC?

I have no specific examples because I don't claim anyone's freedom of speech is being violated. I think the decision by the AMS to reject the men and boys' rights advocacy club was influenced by their bias, but that's just my opinion.

What would you say to the accusations that your club exists purely to stir up controversy just to be anti-PC?

I think those accusations come largely from people who haven't attended either of our events. On the outside, the topics or methods might seem to be brought up/used solely to provoke, but I'm confident almost anyone who collides with us at the events will see that we're there just to talk.

What is the make-up of your club as in how many men, women, white people and people of colour?

Our executive team consists of two white men, one Asian man (the president and founder) and one Asian woman. As for the rest of our members, we're predominantly Asian and male.

Were you aware of the memorial for the 14 slain students when you posted the engineering cairn photo?

The club didn't, a member who was moving the sign back to storage did. But regardless, neither we nor any of our members knew about the memorial or the event it's centered around.

Where do you draw the line on free speech?

The club draws the line at speech used strictly to incite violence, as in “let's go grab our guns and roll around the city in trucks rounding up people we don't like.” Anything that's just airing an opinion, no matter how egregious, is protected by the freedom of speech in our opinion.

It depends on in what way they're advocating it. If it's explicit calls for violence such as “I'm going to get my gun and start killing x, you should too,” then yes, that's crossing the line. It implies intention. If it's something like, “I think we should wipe this race off the planet,” then no, that's just airing a terrible opinion. There's a veeery fine line, but it's there and, in the US at least, that's how we differentiate between protected speech and threats/calls to violence.

If you believe all opinions are equally valid and all speech short of that calling for immediate violence is permissible and good, I'd like to know when we can expect you to set up outside the NEST wearing Nazi or KKK uniforms, and if you won't do that, then why you won't.

We won't dress up in any of that, but if there were a white supremacist or Neo-Nazi group that wanted a platform to speak, we'd do our best to accommodate AS LONG AS we could structure the event in such a way that the speakers had questions fielded to them, and the audience could interact and collide with them. We wouldn't give anyone a platform to speak without being “cross-examined” afterward.

You have claimed elsewhere that people were disgusted by your hats and approached you for that reason, resulting in good conversations. So, I challenge you to put your money where your mouth is, live up to the name of your club, and do the same thing with Nazi and white supremacist paraphernalia.

If we thought Nazi paraphernalia might do the same thing as the Trump hats, we might. But we don't think the reaction would be similar at all. While some people might think the Trump campaign supported racism and homophobia, many disagree. However, we all know what the Nazis stood for.

The club wasn't set up to voice opinions, rather to try to spark conversation between two sides that rarely engage. If there are any minorities who feel their opinions aren't welcome on campus, they should reach out to the club and we can discuss doing an event centered around their ideas.

Fantastic questions. To your first, I have been targeted in the ways you're referring too. It was unpleasant to say the least. Being harassed or jumped for your skin colour fucking sucks. Obviously, I think physical force should be punished, but I wouldn't advocate for laws restricting things like hate speech. Apart from the principle of the thing, I think it sets a legal precedent that can be used by people who feel differently than you to target your group. I'm a big believer in whenever thinking of passing legislation, you have to assume the law will be used against you at some point.

Are you guys all right-wing?

We recently conducted a poll in our group. It's about two-thirds right and one-third left. From my personal experience in the group, I'd say most of us are centrists.

What are you and your club's opinions on Trump becoming elected?

The club takes no stance on it. We have some supporters in the club, we have more that feel the same way you and I feel about it. I agree with some of his policies, disagree with others, but I worry he doesn't have the temperament to be an effective president. However, he has an opportunity to make some great changes (education is one I'd particularly like to see happen) and I wish him as much success as he can have.

How serious is the extent of the backlash that your club has received? According to the video about your MAGA hat event, one of your sponsors received some death threats and was told to leave the country. Is this true?

Not very serious. Our sponsor was threatened by someone outside the province. We've received no threats from students at UBC.

That's a great question. UBC has been much better than campuses such as UoT when it comes to free speech. No groups are silenced. However, we felt — and now know — that there are many students on campus who don't feel comfortable sharing their opinions due to the general atmosphere.

Obviously there are some opinions that people shouldn't feel comfortable sharing, but most have opinions that are relatively benign and center around issues that are extremely pressing (an example might be students who feel Europe shouldn't take in any refugees). Outside of the cultural environment on campus, we feel AMS is biased in the way it deals with certain clubs.

For example, the pro-life club was made to pay $15,000 a day during their event the other week, for “security.” The security was ineffectual, they didn't stop the student from coming through and knocking down their materials and we're highly skeptical that that is the result of a policy of the AMS, rather from bias. Personally I'm pro-choice, but $45,000 for a three-day event is unreasonable, especially when the service that money was supposedly going towards didn't function the way it was supposed to.

How is your club's safe space for bigoted opinions any different from the safe spaces you denounce as negative? If you are not a safe space, then why the need for a club to voice opinions at all?

No one can force anyone to engage in a conversation they don't want to engage in. I'm still at a loss as to why someone would need to set up a protective bubble around themselves for that purpose.

There's no person or opinion that's not welcome in the club. It doesn't function as a space for anything or anyone in particular — anyone can voice anything they like. That doesn't seem like a safe space to me.

What are your thoughts on the housing crisis in Vancouver and would you support building an ocean wall to prevent rich Chinese people from entering the country?

The housing crisis is caused entirely by the city and the way it zones buildings. They purposefully didn't zone enough housing so as to increase property value. If the city didn't zone, housing would skyrocket as it's so profitable right now.

If by “sea wall” you mean strict immigration laws and laws on foreigners purchasing property, absolutely. I'm speaking for myself here, of course. Questions have been edited for length and clarity.