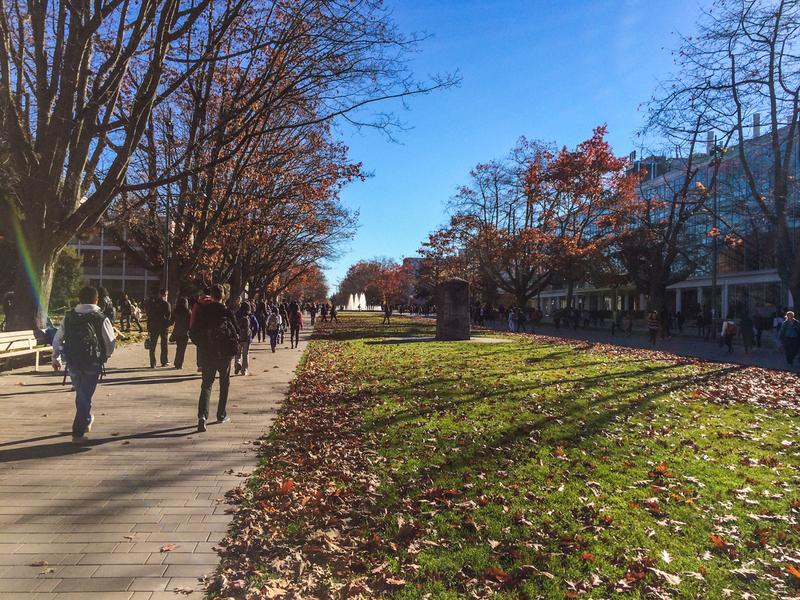 Try not to make it clear which direction you’re going until way too late. File The Ubyssey

At its busiest, the number of people on campus is comparable to the population of Kamloops. Between classes, this entire Kamloops-sized mass of students is funnelled down the grand thoroughfare we call Main Mall. What are the techniques that people use to work their way through the crowds?

As a student with classes in Buchanan, ICICS, Vantage and Scarfe, I’ve had my fair share of getting past the crowds, people standing in the middle of the path on their phones and pop-up samosa sales. Here’s what you can do.

This is the simplest move, best used when your opponent approaches you head-on. Simply walk to either your left or right to avoid a collision. Try not to make it clear which direction you’re going until way too late. Experienced Vancouverites can pull this move off with minimal eye contact.

A more advanced variant of the preceding move: Appear to walk in one direction, and then switch it up! This is a good technique for throwing off your opponent. Again, eye contact is to be discouraged.

This move calls for multiple accomplices. I recommend four to six. Arrange yourselves in an uninterrupted line that spans the length of the path, and walk at the same speed. This is a fail-safe power move: your opponent(s) will have no choice but to step off the path and let your group by. For extra points, look only at your phones while executing the move.

Walking can be overrated. Maybe you just received a very important text. Why not just stop? There’s no better place to do that than right in the centre of Main Mall at 2:54 p.m. If you do pull off this move, make sure there is at least one student hurrying to their next class immediately behind you.

Let’s face it — no one wants a pungent cloud of smoke in their face, especially not one that’s been in someone’s mouth a few seconds ago. Don’t be afraid to use this to your advantage! Rip some clouds on your way to your next class and the crowds will keep their distance. Works best if your opponent(s) are downwind of you.

Finesse your way through the crowds, towering over the pedestrians on your titanium-aluminum alloy steed. The best part of this approach is you don’t even have to worry about the other people, just ride your bike and they’ll get out of your way!