Once and for all: Is it embarrassing to run for the bus? 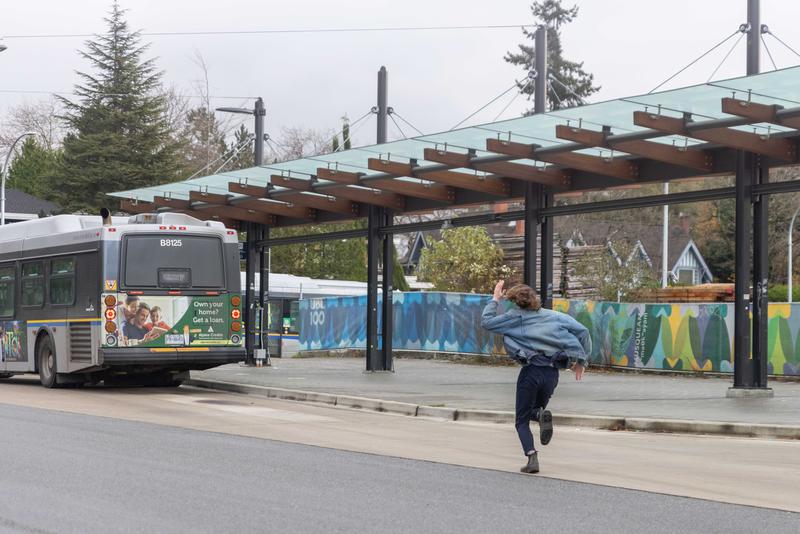 Dignity is something only afforded to those with the means to exercise it. Isabella Falsetti

It’s two in the afternoon, and you’re walking down a bustling street — it could be University Boulevard, it could be Granville Street. You have an interview for your dream job (horse therapist) across town in an hour. You see the only bus that goes to your destination swallow its last passenger. The doors are still open, and you’re thirty feet away. Your bus could wait for another few minutes, or it could pull away at any second.

Do you run to catch it?

Is the ‘embarrassment’ of running to catch the bus — the knees-to-chest, sweat-slicked, backpack-slapping hustle — worth it to make it to your destination on time? Or will you assume a cool, detached demeanour that broadcasts to onlookers that you’re above the grind, that you can stand to be a few minutes late?

Is it, once and for all, embarrassing to run for the bus? Read our exhaustively (and seriously) researched philosophical and statistical analysis to find out.

There are several conditions to consider when answering this question, most of which can be gathered into two categories: the emotional (pathos) and the logical (logos).

The former listens to lo-fi beats in a huddled mess in the corner — they would be best suited by a light jog to the 25. Why run for the bus, the latter says, when the TransLink whale comes and goes as she pleases — my running for it will have no effect either way.

Have you ever run for the bus in concert with several other folks as late as yourself? If you’re in the exact right mood, listening to a real banger, a real cinematic soundtrack, you’re gliding, baby! You’re a squadron, a flying V of tardy desperation — there’s safety in numbers.

However, sometimes you are the lone subject of the spectacle, in danger of being socially castrated much as the bus is shorn from the curb. There is perhaps nothing worse than the infinite hustle towards a bus that exists in two simultaneous states of leaving and not leaving — if you cannot see them, Schrödinger’s bus driver is both inside and outside the vehicle. 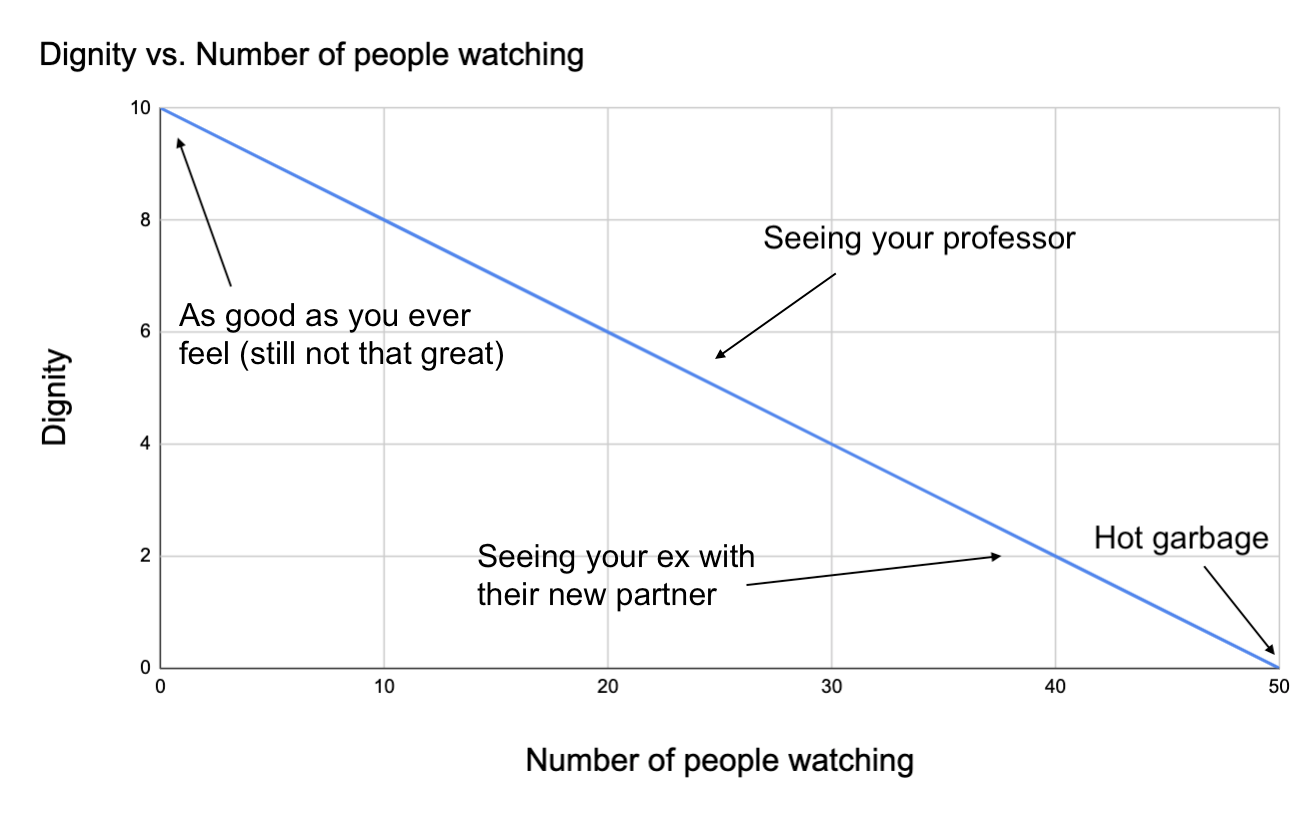 Hypothetically, your dignity when running for the bus is inversely proportional to the size of your audience. Thomas McLeod

But how embarrassing is running for the bus, truly? Who do you think is looking at you? Being publicly embarrassed is not only proof that you’ve fallen prey to the spotlight effect, it’s also narcissistic. Do you have any idea how bad that guy behind you just bombed on his compsci exam? He was expelled for bringing the historical average of the university down by a full percentage point! He doesn’t give a devil’s ass about you!

Logos: You may not be late; you may just want to arrive at your destination earlier so that you can get your dog’s baptism over with and get on with your day. Running for the bus in the quest to better yourself — putting a stop to the neurotic need to be a disaffected sex symbol even when you’re alone — requires you to stop thinking of yourself as a body being perceived by other bodies and to begin to realize that you’re a brain attached to meat-and-bone burrito hurtling through space.

It may be late at night, no one will see you take that leap of faith all by yourself or with your plastered friends — and it’s the last bus of the night. Dignity is something only afforded to those with the means to exercise it. 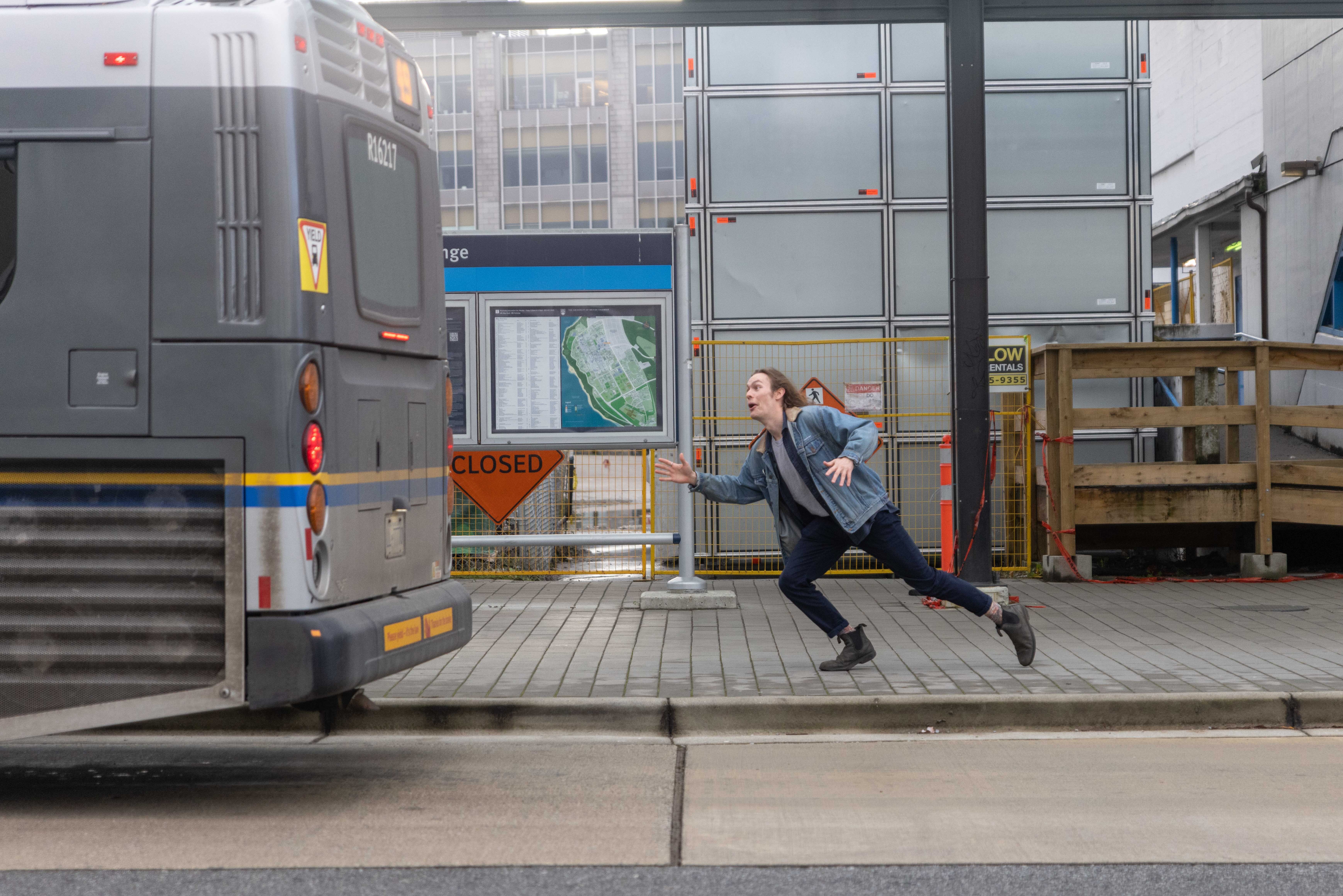 You run, a smile on your lips to hide your humiliation. You will have many such moments — separate your self-esteem from the jurors of the bus loop. Isabella Falsetti

Out of the warm embrace of the campus bus loop, with its maternal overhangs and reliable maps and schedules, the rain falls hard and unfeeling on your freshly-moussed hair, soddening you before your Big Date — running for the bus in the rain is the closest thing we have to an airport gate scene in the 21st century.

Philosophically, there are almost no downsides to running for the bus, other than your fear of being perceived as desperate/earnest/sweaty by the jostling phone zombies trying to find a new interpretation of Taylor Swift’s scarf references (I have my own theories).

Consider bus scarcity: it’s the last bus (the 99 at 1:20 a.m.); it’s a rare bus (the 480); it’s a very specific route with an annoying 20-minute wait between buses (the god damned 33). You have to weigh the practicalities of foot-dragging before you foolishly worry about whether a passing cutie will think about you being dry and sexy while you miss the bus!

If it makes you feel better, here’s a breakdown of the average ridership for each route: 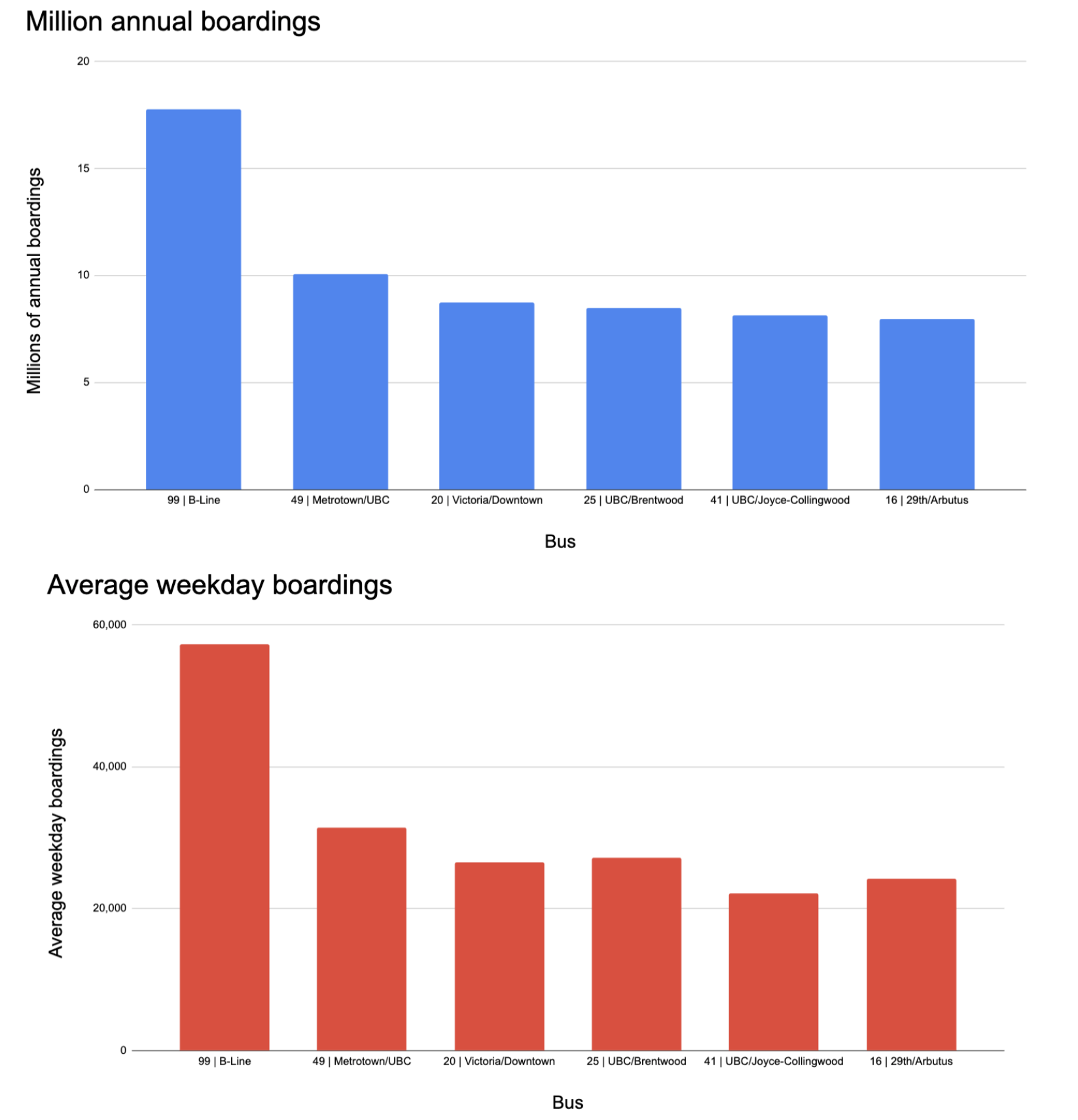 Yeah, these graphs tell you everything you already intuitively know, but the 99 has been dominant this season; the Michael Jordan-esque gap only serves to highlight the pointlessness of running for it.. Thomas McLeod

As ‘reported’ by the Daily Hive, here were the six busiest bus routes in the region in 2019 based on annual boardings (there were ten listed, but I didn’t want to write that many and you don’t want to hear what I think of the god damned 9):

So fuckin’ what if you miss the 99? At peak traffic, it comes 20 times an hour! If you’re running for this bus, it means you’re telling everybody that you’re really excited to get wedged into a sardine can so tightly that your face is smushed against the window, looking right down the barrel of the empty 99 following a full 11 inches behind yours.

If you’re running for this bus, it better be for one or both of two reasons: that you’re just straight chuffed to get on that bad boy and drink in the splendour of the sun-kissed ocean lapping at the edges of Airport Island; OR, you’ll somehow be the first one in an absurdly long line of Kerrisdalers.

This bus is pretty frequent, but if you’re taking the 20, you’re probably on your way to some cool venue to catch up on East Van’s hyperpop-folk scene, in which case you’re gonna have to leg it — for people so concerned with breaking the structural barriers of sound and culture, that crowd runs a tight show.

You’re taking the 25 either to hang out somewhere in South Granville or to covertly take a meeting at BCIT in an effort to transfer and finally get a useful degree. If it’s the former, you can survive the 20-minute wait: South Granville waits for you. If it’s the latter, hustle! Being a deadbeat got you places at UBC, but not when you have 60 credit hours and an apprenticeship to complete in a single BCIT academic year!

If you’re like me, you’ve only ever taken this as a transfer bus to get to the most inaccessible parts of Vancouver, and therefore, you’re already having a bad day. You don’t need me to tell you about the R4 (stats not available) — if you’re taking the 41, I hope you’re in a better place now (having left Surrey). Bust it to this bus, or you’ll never get out!

I’m a big fan of the 16, I can’t lie to you — cruising through the metropolitan/decrepit downtown Granville to the boutique wasteland of medium Granville to the gull-ridden industrial parks of South Granville is like being on a Disney ride through the city of the future, where everyone has to wear either Arc’teryx or corduroy underwear. If you miss it, odds are you can grab the 10 downtown right after, but if this is a 16-specific route you’re looking for, you’d better hoof it up Granville or else you’re gonna see some shit you ain’t never gonna forget.

If your bus is not on this list, I have bad news for you: you’re gonna have to run. Because if you don’t catch the 242 to Lynn Valley, you’re going to be waiting another 40 minutes, and that’ll put a real wrench in your day hike and ensuing Vancouver fitfluencer post and the nine likes you’ll get on TikTok — you wouldn’t want that, would you? When you have goals, temporary embarrassment in the eyes of sweating masses should mean nothing to you.

Life is essentially short and meaningless, and as little of it as possible should be spent standing at bus stops — the liminal mindset of never knowing what’s to come will leave you spinning in the universe like a boat without a rudder.

This author is telling you to pull out an oar and start paddling. Run for the bus — no shark has ever felt embarrassed to swim in front of the fishes.