How to find a place to live in Vancouver

Maybe you've moved here from a different country to study at UBC, and maybe you just really don't want to commute from your parents place in Surrey. Either way, it's time to find somewhere to live in the big city, which can be an annoying, expensive, and exasperating experience. In a bid to make it suck less, we've compiled a comprehensive guide to make your house hunting experience easier. 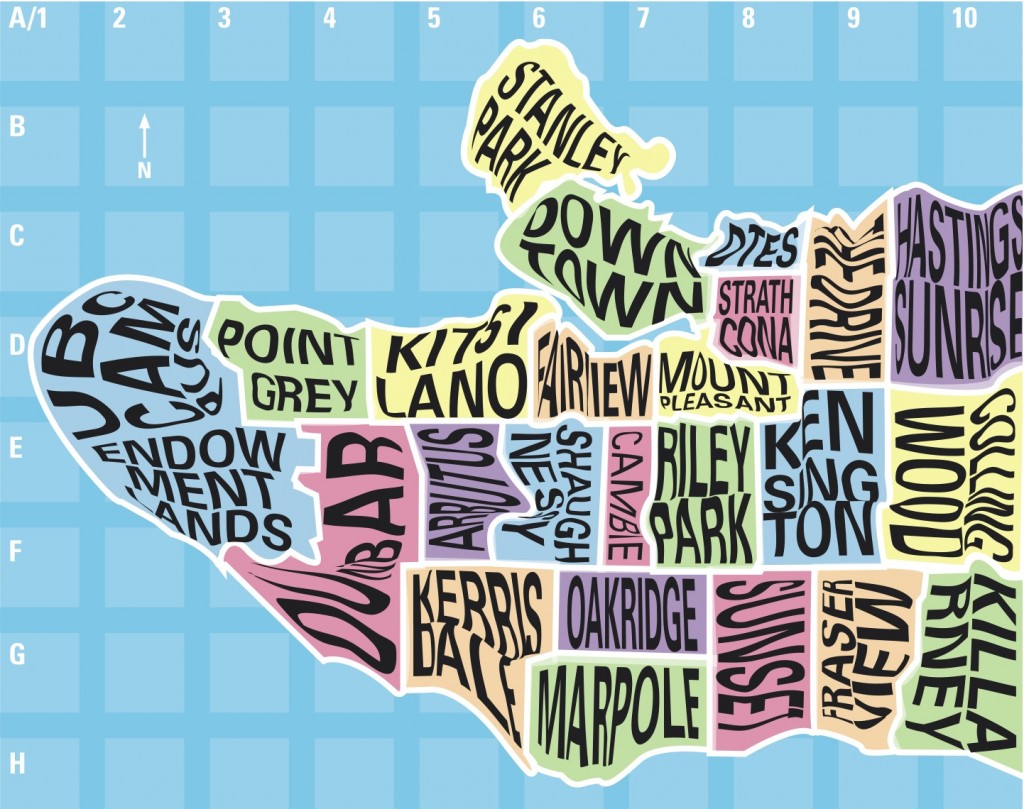 It's a general rule that the further west you go in Vancouver, the more expensive it is. Point Grey is no exception. Beautiful, full of beaches, wilderness and health food stores, the western peninsula of Vancouver is an amazing place to live, especially if you're a UBC student (who can afford it). Spanish Banks to the north, Pacific Spirit Park to the south, Wreck to the west, and a lovely little commercial district along 10th Avenue -- this place is amazing.

Home of yacht clubs, sailing classes and an abundance of yoga studios. It's a paradise for those who love an active lifestyle, and in the summer, there's nothing better than lounging on the beach at English Bay with a cup of carrot/cucumber juice in your hand. Kits is beautiful, but like all beautiful places, very expensive.

Mostly residential and extremely safe, this neighbourhood is a top choice for UBC students and Vancouverites in general. Dotted with little cafes, parks and shops, it has a non-hipstery charm that makes you feel at home. It's a little ways away from downtown, but still definitely accessible by bus. If that's not a dealbreaker, Dunbar's a swell place to live.

A little less "Kits-y" than Kits, holding a trendy vibe all its own, Kerrisdale is cool. All along 41st Avenue are little locally-owned shops and bigger fashion stores like Hill's. It also boasts the best farmer's market in Vancouver, which sells fresh, local produce every Saturday.

Heaven for hipsters (but also really interesting for normal people). Main Street used to be a lot more sketchy than the thriving arts and culture centre it is now, but it's still got a death grip on the ancient antique shops and rundown Asian markets on the south end of the street that existed before gentrification, and will remain long after. Head north and you'll find galleries and pubs before arriving in Chinatown.

The core of Vancouver is a special place to live. Granville Street has all the live music and night clubs you could hope for, while the LGBTQ-friendly West End is one of the friendliest, cleanest and most beautiful areas of any major city in the world. North is Stanley Park, the Seawall and Vancouver Aquarium. Robson Square has food trucks and street performers, and a little east is Rogers Arena and BC Place, where you can take in the Canucks, Lions and Whitecaps, as well as world-famous performers on tour. And just east is the Downtown Eastside.

Often referred to in the media as "Canada's poorest postal code," the DTES has some issues. Crime, drug use, sex work and mental illness make up a large part of the area's identity, but it's also home to arguably the most character in the city. From stunning, cobblestone Gastown to the rich history of Chinatown, don't let this book's cover scare you off. It has its flaws, but the DTES is vibrant in a good way.

Speaking of vibrant, Commercial is probably the best way to spend an afternoon if you're into live music and awesome food. This stretch of East Van is known for its multicultural eateries -- especially Italian -- and boasts the best foodie atmosphere in the city. The Drive's proximity to the downtown core also makes it attractive, even for students who have to commute west.

Almost purely residential, Marpole is pretty boring. Luckily, its large numbers of apartments mean that rent is pretty manageable compared to the rest of the city, and numerous bus routes exist to take you out. Its proximity to Richmond is enticing for people who have family there or just want easy access to the neighbouring city.

When to start looking

A lot of people will tell you to start looking as soon as possible, but the fact is that the vast majority of ads don't go up until about a month or two before the move-in date. It is, however, a good idea to keep an eye out for the rare places that are advertised way in advance, and also to get an idea of how ads are structured, what sells for how much, etc.

Craigslist is the first item for a reason. It's where most people post their things for sale, housing or otherwise.

Padmapper used to be the place to go, until Craigslist won a lawsuit against them on June 26, 2015, forcing it to stop taking content from Craigslist. Now it just uses Kijiji and Padlister, but it's worth checking out once you've exhausted Craigslist.

A few groups might be able to help you out, like Vancouver apartments for rent and the UBC housing group.

Run by UBC's Alma Mater Society, this is another site that lists rentals specifically geared toward UBC students. You have to pay to run an ad here, so it's generally free of any sketchy stuff.

Maybe they're moving out of a place that'd be perfect for you. Maybe their brother will give you a deal on a sweet suite. It's always worth a shot to ask around.

What to look for in the ad

Okay, duh. But it's important. What can you afford? What will you be able to afford in three months? Is it really worth the extra $400/month to live 20 minutes closer to school?

I know we've already kind of covered this. But there are some important questions you should ask beyond knowing what kind of vibe the neighbourhood gives off. How far away from university is it? If you're bussing, how many transfers will you have to take (check Google maps)? If you're driving, is it commonly backed up during rush hour (ask someone)? Where's the nearest grocery store? Where's the nearest real grocery store (Andy's Root and Seed Emporium probably won't have KD)?

Does it have insuite laundry? A dishwasher? An oven, or just a hot plate? Does it come furnished? What's that weird stain on the futon?

Make sure you know what you're getting into. If the ad says "room for rent," you'd just be renting a room in a place that's shared with other people. "Roommate wanted" obviously means you'd be moving in with someone, and an apartment is quite a bit different from a suite in a house.

What's in the bill

The rent advertised can include or leave out a lot of different things. If the ad doesn't say that the price per month includes electricity, internet and the like, it's probably a safe bet you'll have to cover that on your own.

Too many times I've found the perfect place for the perfect price when I notice that it's only available for three months. Make sure you find out how long you can rent it for, and if it's a full lease, how long that runs. Most go for a full 12 months, but some will do an eight-month term if they're trying to attract students (living at home over the summer is a killer way to save money).

Not a concern for many students, but if you have a furry friend, make sure the landlord is cool with it.

Once you find a place you're interested in, all you have to do is send an email or call the person who listed the ad. Make sure to mention your age, where you go to school, your job or source of income, and a little bit about what you'd be like as a tenant (very quiet, respectful, etc.). Then politely ask if there's a time you could come check the place out.

When you're actually seeing the place, be on the lookout for anything you wouldn't want to deal with if you actually lived there -- leaky faucets, non-working light switches, smoke detectors or faucets, mould, loud upstairs neighbours, bugs, subtle slanting of the floors (I lived in a place for a year where all the oil in my frying pan would pool on one side), etc. Don't be afraid to ask your potential landlord about all these things when you're on the tour -- it's not impolite, you're the one who might be living there. It also gives you a chance to gauge their reaction, for instance, if they seem annoyed or frustrated that you're being thorough, that might be a sign of bigger problems.

This is also a good time to ask questions about what kind of rules they have for the place. What are their rules about get-togethers? You'll want to be as vague as possible when you're asking these questions -- you don't want to seem like you're looking to host a bunch of squatters or throw ragers all the time, and they'll usually give you a pretty good indication of their feelings if you ask something like, "Do you have any specific rules about guests?"

Some landlords may ask for your Social Insurance Number or driver's license, but you aren't required to provide either in B.C., and they can't deny you as a tenant for refusing to do so.

As important as the obvious stuff is being aware of anything that seems "off." One of the most important things you can do when house hunting is trust your gut. If the pit of your stomach is telling you that something's not right, it probably isn't. Don't be afraid to walk away.

Once you settle on a place

Nice work! You've looked at a place, you've met the landlord, you like the area, and you now know where you're going to live for at least the next little while. The landlord has agreed to give you the place, so all that's left to do is sign the lease.

You're going to want to read it.

I know it's a lot of words, but it's always a good idea to understand something thoroughly before you put your name on it. Make sure you understand everything in there. Once it all looks good, sign it and hand over the damage deposit (usually half a month's rent, you'll get it back at the end of your lease if you didn't damage the place). Speaking of that, take photos of everything.

Every crooked cupboard, every dirty corner, every hair out of place, so you can prove at the end of your term that any pre-existing damage wasn't caused by you. You don't want to lose out on that money because it comes down to your landlord's word against yours over who caused the crack in the bathroom tile.

Once that's done, all that's left to do is celebrate!