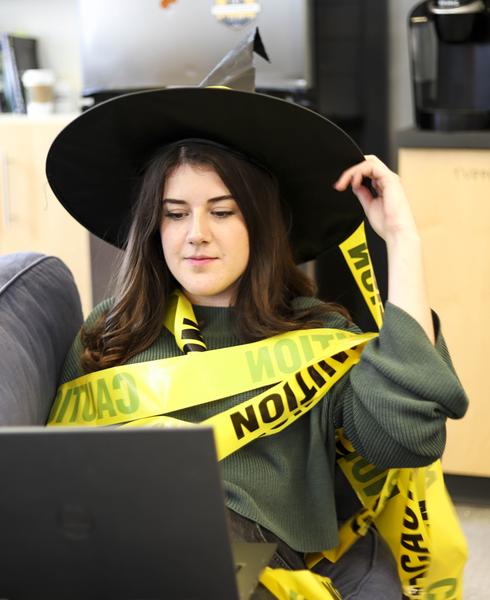 Halloween unfortunately falls on a Wednesday this year, so night-of Halloween bashes just aren’t realistic for some of us, especially those of us without any friends daring enough to host a rager on a Wednesday. Instead, here’s a list of things to do all by your lonesome this Halloween.

Eat a box of Halloween candy (or two).

Hit up Safeway and pretend to stock up on candy for trick-or-treaters even though you know no kids will be knocking on the door of your basement suite. Make sure to get a variety; if one whole box of Kit Kats doesn’t make you sick, two surely will. Also make sure to leave your roommates some candy, but only the ones you don’t like – Oh, Henry's mainly.

If you forgot to carve a pumpkin earlier in October, why not carve one tonight? Yes, most grocery stores will be mostly sold out, and the only pumpkins available will be on the verge of decomposing, but that’s not stopping you from being in the Halloween spirit. When you’re finished, you’ll have a carved pumpkin that will collapse within two days and too much pumpkin guts to fit in your composter.

You worked so hard to make your A Star is Born costume, would it be that bad to wear it again but without an audience? Yes, it would. Hopefully, you’ll see that wearing a niche costume all by yourself is very sad, especially when you don’t have an Ally to complete your Jackson Maine.

If you’re too scared to watch an actual horror movie alone, load up some classic Goosebumps episodes on Netflix, and wonder why this show ever scared you as a kid. Fill your night with mediocre acting, shoddy production value and fresh 90s fashion. Start from the beginning, or hit the ground running by watching Ryan Gosling’s breakout role in the episode “Say Cheese and Die!”.

Once you start the Goosebumps train, you can’t stop it. Dig deep in your closet and find those classic novels that used to give you nightmares, and honestly, still might.