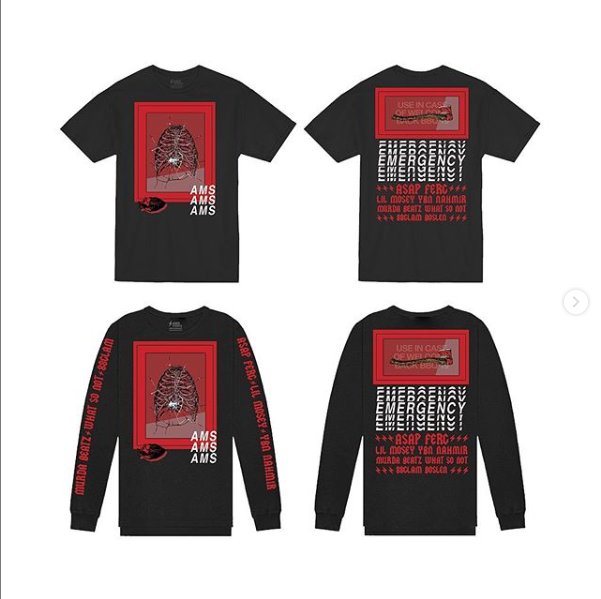 Now that it's the day of the Welcome Back BBQ and excitement is rising, the AMS has announced the god-awful merch they’re selling tonight.

The shirts are designed by Frontrvnners Streetwear, made for the Welcome Back BBQ tonight. On the shirts are a design of a ribcage and a heart, and the back features the names of the performers for the event, as well as the word “EMERGENCY” and what appears to be a ticket with an axe on it. The shirt notably does not include Lil Nas X’s name on it, as earlier this week it was announced that he had cancelled his performances for the week. The short sleeve shirt is being sold for $35 while the long sleeve one is $55.

Now, let’s discuss the shirts themselves.

The design itself is anxiety-inducing. A ribcage with a dislocated heart and an axe on the back? Horrifying. It’s not even Halloween yet, you guys. The word “EMERGENCY” being repeated over and over on the back makes it even worse. What’s the emergency? Is it that a heart is lying on the ground in this image of a ribcage? Is it that you just spent $55 on a t-shirt that says AMS on it?

It’s not just me that finds it off-putting. Take it from a few comments on reddit. “That actually looks cursed” writes user u/Formal_Contribution, completely capturing my thoughts in a concise sentence, and in another very on-the-nose comment, user u/mshahman simply writes “No.”

Whether you buy one or not, you’ve got to admit this shirt is a weird one. It’s avant-garde, it’s jarring and it’s sure to be polarizing.