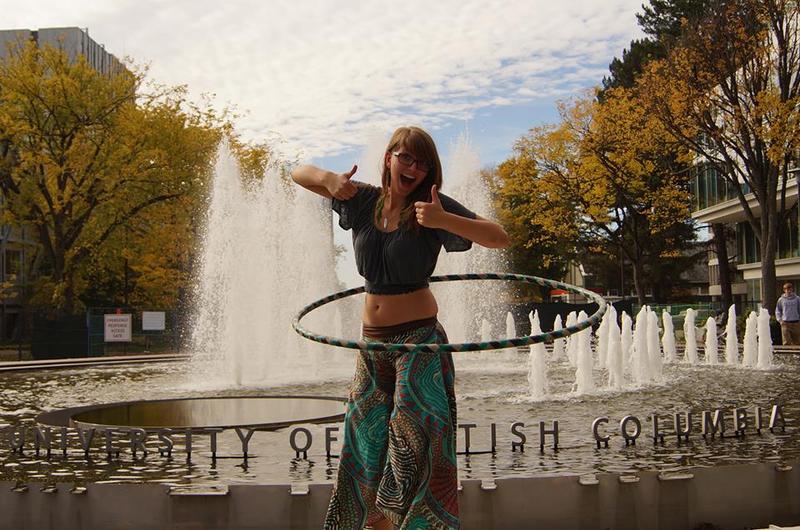 Among the many UBC clubs, the Hula Hooping Club is a one of a kind with a fun and warm atmosphere. It’s not the typical “waist-hooping” moves you would expect, but rather more of a tricks and dance-oriented club.

Vice-President Danika Hammond had the idea to start the club in her first year at UBC. It began as small meetings at Place Vanier among residents, but expanded when Hammond brought the club proposal to the AMS in the spring of 2014 – since then they have been an official AMS club.

The main idea of the club is to simply get together, hoop and teach each other tricks and moves. The club consists of around 15 members. “But we welcome all newcomers,” said Hammond. Hoops are available to everyone interested in hooping during the events and there’s always someone around to guide newcomers.

“It’s not about being an expert,” Hammond added. “We try and avoid competitiveness to make sure everyone feels welcome.”

The Hula Hooping Club meets on Wednesdays in the SUB in room 2301 and Fridays in room 2311. “The location changes every semester. We try to be as accommodating as we can for all our members to attend,” said club President Navpreet Ganda.

“One thing I’d really like to do is bring a professional in and teach a class,” added Ganda, particularly referencing the Hoop Fairy — a professional hula hoop dance instructor.

In addition to hula hooping together, the club also makes hoops with polypro tubing, electrical tape and a smaller tube that fits inside the polypro to attach it. The club provides all of the materials needed for only 10 dollars to make it yourself and Hammond is a helpful hand in assisting members create them.

The club also attends events around campus throughout the year including Imagine Day, Relay for Life with the Canadian Cancer Society and the upcoming Frost Fest in January. Initial membership fee is five dollars and that grants access to all meetings, participation in all their events and a chance to enter special giveaways – the last prize being a ticket to Coachella Music Festival.

For more information on the hula hooping club, check out their Facebook page or drop in at their next meeting.