The Magicians and Illusionists Association is more than rabbits and hats 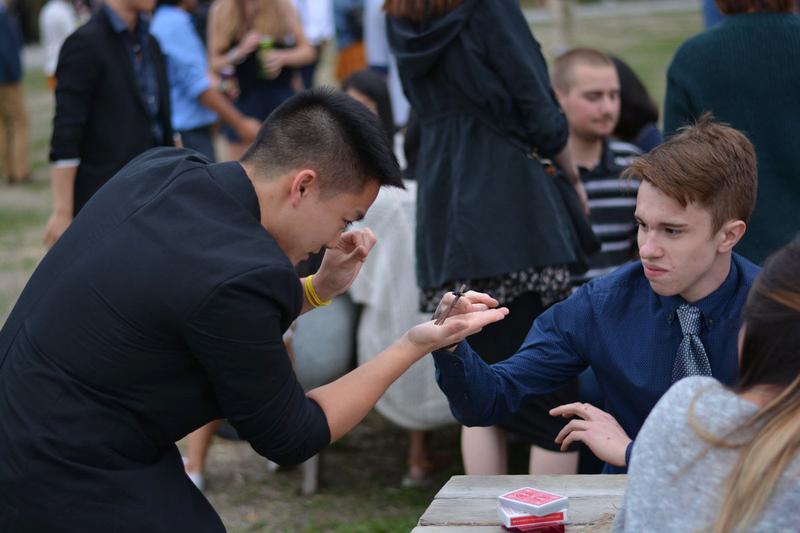 Whatever I thought the first meeting of the year for the Magicians and Illusionists Association would be like, what I walked into wasn’t it. With around 45 people crowded in a tiny bookable room in the new SUB, it quickly became hot with some members showing off their deck of cards (Bicycle brand, of course) while others talked about the tricks and feats at the previous week’s icebreaker.

It quickly became obvious that the weekly meeting was less of a social meeting and acted more like a causal classroom. With the crowd of new members, the student administration of the club discussed the basics of magic and illusions before moving to a practical session. Here, the members learned the basic skills every magician should know.

Instantly, it became clear that what the audience sees during a performance is nothing more than what the artist wants them to see. “Magic tricks are 70 per cent storytelling,” said James Lau, co-founder and current vice president of the club. However, he added that most “street magic” is sleight of hand and misdirection.

The club has welcomed rather unexpected success this year. The association, which was only founded this past December with under 20 members, now holds a mailing list of over 300 students and has added 80 new members already.

Co-founder and VP admin Andy Au says the club will be holding a lot of workshops at the beginning of the year as many of their new members are also new to magic. They are hoping to find at least a few students who really excel and take them under their wings.

The club has also found success outside the classroom. They have collaborated with a number of clubs on campus to hold memorable events including the Chinese Varsity Club, the AMS and the Calendar’s Spring Formal.

Even outside campus, the club has shone. “It’s really cool to have outside groups just email us about their events,” said Au, listing a Canada Day event on the North Shore as one of their bigger occasions. This upcoming year, the club hopes to run their own event or possibly two — “like a magic Block Party.”

“People have this idea that magic is childish — you know, pulling a rabbit out of a hat. But what we do, it’s more than that,” said Lau before assuring me they do not use live animals in their tricks. Au adds, “[Something like] dancing isn’t for everyone, but everyone loves a cool magic trick.”

I assume that’s the secret to their success. As the saying goes, a magician never reveals their secrets.

Memberships, which cost $10 for the year, includes the weekly workshops and can be bought at any meeting or event. For more information, send them an email at ubcmia@gmail.com or check out their Facebook page.