Observations from the quiet, stressful wasteland of IKB 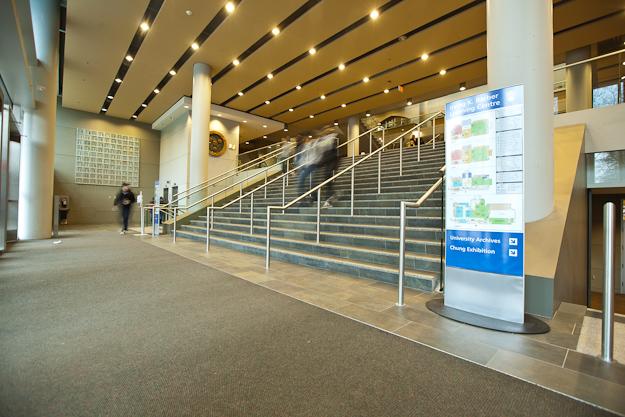 The library is a place to buckle down and motivate yourself to study. File Geoff Liater

The library is a place to buckle down and motivate yourself to study while surrounded by hundreds of students trying to do the same thing. To be honest, I do not spend as much time in the library studying as I think I should. Maybe this means I’m not studying enough. But in the spirit of finals, not wanting to disappoint myself and trying to become as “student” as possible, I made my way to IKB to see what all this fuss was about — and maybe get some work done too.

I entered through fancy wooden doors that look out of place compared to everything else made of glass and concrete here. As I made my way up the weathered stone stairs, two students who had come in behind me rushed ahead of me. I was impressed by their enthusiasm, but when I made it to the top of the stairs, I realized why they had been running: seats were few and far between.

The room was packed with students working away diligently in their notebooks and computers. I saw equations. I saw essays. I saw SparksNotes and a lot of tabs open. I was immediately reminded why I should come here and why I don’t. The library regulars are truly a thing to behold. Diligent, studious academics. I don’t belong.

I made my way to the Ridington Room just to try it out. That’s a lie. There were no seats left on Level 2 or 3. However, a few of my studious friends have praised it for its silence, portraits of important people in robes and a particularly attractive modern art piece. The portraits were great and the art was distracting. The silence, a capstone of the library, proved to be the hard part.

I sit beside a girl who is typing diligently and immediately feel bad about myself.

I attempt to unzip my backpack as quietly as possible, but it was evidently not silent enough for the people around me. I pulled out my pencil case, but my foolish self had forgotten to close it and out came its contents. Noise. A few minutes later, I opened my water bottle. More noise. Three heads at nearby table whipped around. The real kicker was when I forgot to plug my headphones in and Michael Bublé’s “Christmas” came blaring out. I immediately aborted the library mission, resolving only to return again when I am older, wiser and much, much quieter.