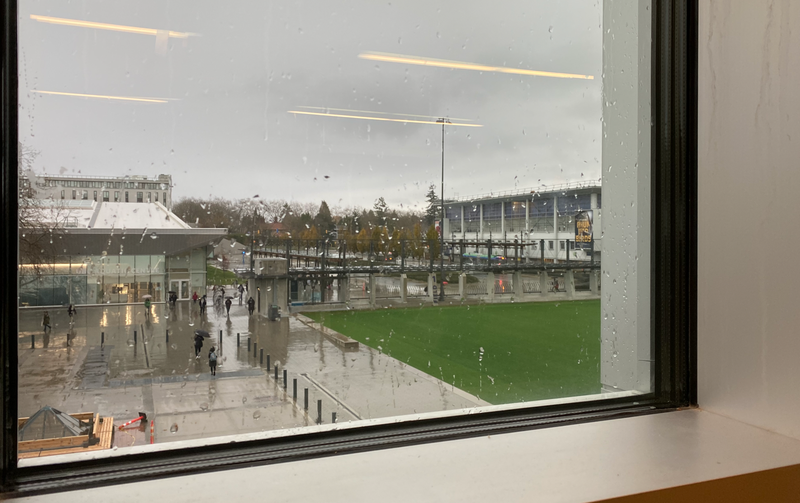 As November rears its wet little head, the rain begins to fall hard and so do we, down, down, down into rainy day rabbit holes scattered around the internet.

Is it each raindrop that sharply plunks against your windowsill that triggers each involuntary click on a new link in an unending stream of links? Or does the rain keep on comin’, comin’ because you keep on clickin’, clickin’? Experts debate. Babies know but never tell. The jury is out on this one, at least for the time being.

But you, quick, keen, research-university attending student, I know you can figure it out. You just need the right sources. So I present to you each click in today’s long stream of clicks that carried me through mud and maple leaves into yet another rainy day rabbit hole.

The Neville Scarfe Library is where it went down—where I went down. One comfy seat plus one tiny desk times two hours between class and improv practice equals a slippery slope and zero schoolwork completed.

Study music is what I was searching for. If I could find the right music, I thought, I would really get something done. Emile Mosseri's score for the film Minari was just starting to get old after playing on repeat for my last two assignments. But I didn’t want to ruin my nice, cozy Scarfe solitude with hours of sifting through lofi chillhop beats and severe classical music from the 1800s. So I simply followed Emile Mosseri’s breadcrumbs thinking, there must be more of this.

Kajillionaire was his most recent work, so I went that-a-way. It was exactly what I wanted. It’s full of bassy synths, Philip Glass-y pianos and angelic choral oohs and ahhs. It’s moody and uplifting all at once. (Putting off) writing my historical linguistics assignment to this music made me feel like I was falling in love. It even features Angel Olsen, so, of course, I had to know what this movie was about. I’m young and hip and up on things! Why had I not heard of this movie?

So I watched the trailer. I recognized every actor and the whole thing was visually stunning. This was Miranda July’s latest film, and that was something to be excited about... except I had never heard of Miranda July.

So I Googled her. This woman does it all! She’s written a novel, she’s a sculptor and she’s a filmmaker. She’s also married to Mike Mills. Who’s Mike Mills, you ask? My thoughts, exactly.

So I Googled him. He wrote and directed 20th Century Women, the one film featuring Greta Gerwig that she didn’t write. I thoroughly enjoyed that film. Toxic, I know, that July’s husband’s career validated her artistic merit in my mind. I returned to her page, realizing then that I had, in fact, seen her face somewhere before, a long time ago.

The poster for her film Me and You and Everyone We Know used to hang in the Country Hills Landmark Cinemas staffroom, where I ate many a soft pretzel when I was 15. I had just gotten really into cool movies then, so if it wasn’t Kubrick or Paul Thomas Anderson, I wasn’t about to watch it. But!

It gets an 82 per cent on Rotten Tomatoes, which is pretty high for an indie romcom from 2005. And I’ve gotten over my obsession with old man filmmakers (somewhat). I also thought that John Hawkes was DJ Qualls (he isn’t), whom I adored in the Sandra Bullock movie All About Steve when I was nine, so his credit piqued my interest.

I downloaded it (July’s film, not All About Steve), but by then I was late for improv practice. I closed my laptop and bid adieu to the leaves outside the window, which nodded at me with each drop of rain that plopped onto their surfaces.

If I had turned off my computer and walked outside to a sunny day with excited students and a big blue sky, maybe it would have felt like leaving the rabbit hole. But in reality I packed up my things and left the library with the same amount of shit to do as I had come in with, drifting into Gloomtown, BC, where it rains constantly during midterm season because there’s so much stress-sweat in the atmosphere. This transition merely felt like a continuation of my digital journey.

When I got home I watched Me and You and Everyone We Know. I asked my partner if they’d ever heard of it and they said, “Oh, yeah. The pooping back and forth movie?”

The next night we watched Kajillionaire. It’s been a week and I’m still thinking about it. Am I still in the rabbit hole? If peaks are happy moments and valleys are sad, what am I while I’m in this hole?

At least there’s a cool artist lady down here making movies for us. Come on down.