The Dingbat: I stole Santa (Ono)’s naughty and nice list 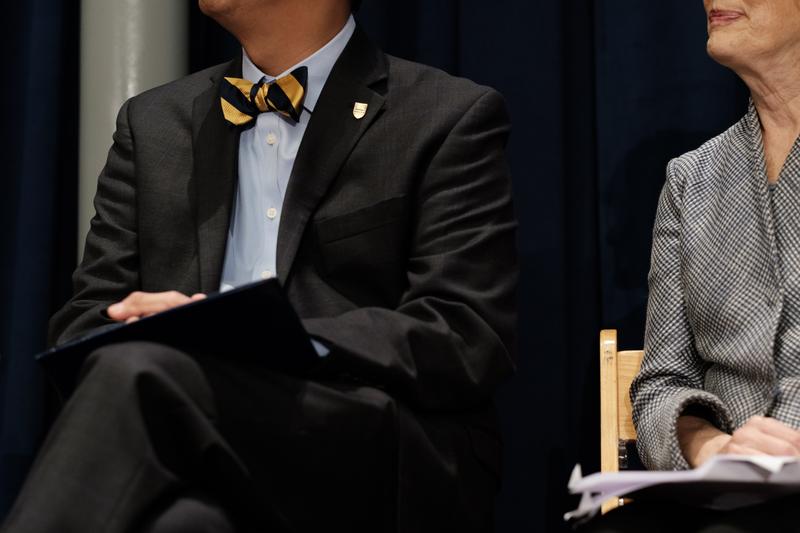 I’ve got you, you slippery, bow tie-wearing, Twitter-famous bastard. File The Ubyssey

After nine minutes of jimmying the lock of the Norman Mackenzie House, I was in.

I’d been planning this heist for years. Ever since I was a child, I’ve wanted to catch that jolly man in the stupid fucking red hat. When I was seven, I asked him for a pony. When I was nine, I asked for an American Girl doll. When I was 12, I asked for a DSi XL (the burgundy one, of course). The thing is, I never got what I wanted. I got socks, books and a Wii (that one was pretty cool, not gonna lie), but there was always something else that came tightly wrapped and was placed under my tree.

A big, fat lump of coal.

I’m not a bad person — at least, I wasn’t when I was a kid. I mean yeah, I chased my sister around the house pulling her hair and yeah, I cheated on my grade five social studies exam (it was hard! It was on the Thirteen Colonies), but I’m not a bad, bad guy at heart. I’m nice! But if Santa thought I was naughty, I must have been.

Years went by and I stopped writing letters to Santa. But I decided to write one last letter to ask for one last thing before I went off to university and left my Santa-believing days behind me. I asked to be admitted to UBC. It was a dream of mine — to walk down Main Mall and see Santa everyday, Blue Chip cookie in one hand, iClicker in the other, laughing at those losers who run AMS clubs. Christmas day came, and I snuck downstairs before the rest of my family.

This Christmas felt different than all the rest. The tinsel on the tree was shining in the sun. Every morsel of cookie was gobbled up by that man with the bow tie, and well, I just felt hopeful. I saw the gift with my name on it and slowly peeled back the wrapping paper to reveal one lump of coal.

That’s it? No note? No socks? And only one lump? How cheap!

Suddenly, it started to rain, thunder and lightning illuminating my living room. It was a good ambiance for my final push to become the anti-Santa. I gave up on Santa and Christmas. I stopped carolling, developed an unhealthy obsession with Halloween and started relating to Ebenezer Scrooge.

So I started plotting and planning and prepping. If I’m on the naughty list, I have to be the worst one there. I decided that I would wait until Santa would finish his list so I could break in and steal it. How is he supposed to give anyone gifts when he doesn’t have a list to check twice? He won’t know who’s naughty or nice! The horror.

I put on an all-black ensemble, gloves and all, and topped it off with one of those UBC hoodies that first-years buy to flex that they got into UBC. I bought it before I swore off all Santas, whether their last name is Claus or Ono. Worst $60.00 ever spent. The lengthy SkyTrain commute followed by riding the 99 B-Line from Commercial-Broadway to UBC made me think: is this worth it? The answer: Absolutely it is.

Once I got to the front door of the Norman Mackenzie House, I stood there, taking it all in.

I crept up to the front door, pulled a bobby pin from my hair and got to work. I won’t lie to you, it was scary. The feminine urge to drop everything, burn my house to the ground, change my name and move to another country was so powerful. Being constantly threatened by the idea of an elf, student politician, frat bro or even Santa himself sneaking up on me was scary. I was exposed, but after nine minutes, I was in.

Instead of exploring Santa’s workshop, I headed straight to his office... I mean, lair. I didn’t have time to dilly dally, I was there for one thing and one thing only — that fucking list. The lair was dark and an evil aura filled the room. There were bow ties littered around the floor and the walls were lined with honorary degrees of racists’ past. It was horrifying. I don’t think I’ve ever seen something so bad in my life. That is, until I felt a thick and slick liquid hit my brow. Dripping from the ceiling was 100 per cent pure-grade tar sands oil.

But there it was. Perched gloriously on Santa’s desk: the naughty or nice list.

The first name on the list was the oil and gas industry. So I must be reading the naughty section, right? Wrong! UBC has been investing a ton in oil and mining recently. But the jolly man with the red hat and bow tie said that he would divest. Did he lie? No, no. He wouldn’t. Would he?

Next on the list was Cole Evans. I have no clue why he’s on the nice list. He made a whole bunch of journalists sit on the floor for two hours because he doesn’t like us. Talk about supporting the media. Right under Evans was the city of Surrey. ‘Nuff said. The next was the University of Cincinnati, Santa’s old stomping grounds. I wonder if he denied any kids admission back then. I should have invited them to help with my heist.

My eyes flipped to the naughty list. First was Neo Financial, and I agree. I get hollered at too often by old men on a day-to-day basis, I don’t need that in the Nest, too. Yes, I want the tote bag — it’s free! No, I do not want to join your cool, hipster, Gen-Z, new-age, TikTok bank because my parents’ bank doesn’t understand my finances. Hell, I don’t understand my finances, either. Next were tie wearers. I don’t really get the whole bow-tie supremacy thing. A little necktie never hurt nobody. Right underneath tie wearers was The Ubyssey. Valid. We are pretty naughty.

I sighed and put the list in my pocket. I wasn’t on it. Santa doesn’t care about me. He doesn’t even know who I am. Leaving Norman Mackenzie House with the list was supposed to be a moment of triumph. I was supposed to walk out a victor, seven times hotter than before I broke in, with millions of people posting about me on UBC Crushes. But I’m leaving defeated. I’m leaving upset.

Months passed and I just couldn’t shake the feeling that a part of me was left at Norman Mackenzie House. My days became monotonous: school, work, volunteer for The Ubyssey, repeat.

On Christmas, a year after my heist, I couldn’t get myself to participate in any activities. A year ago, I wanted to be the Grinch who stole Santa’s naughty or nice list. But now, I’m just a UBC reject. I dragged myself to my mailbox and what do I find there?

A photo of me. With the word ‘naughty’ written on it in oil.

I guess I’m just a bad, bad guy at heart.