I ate bugs and so should you 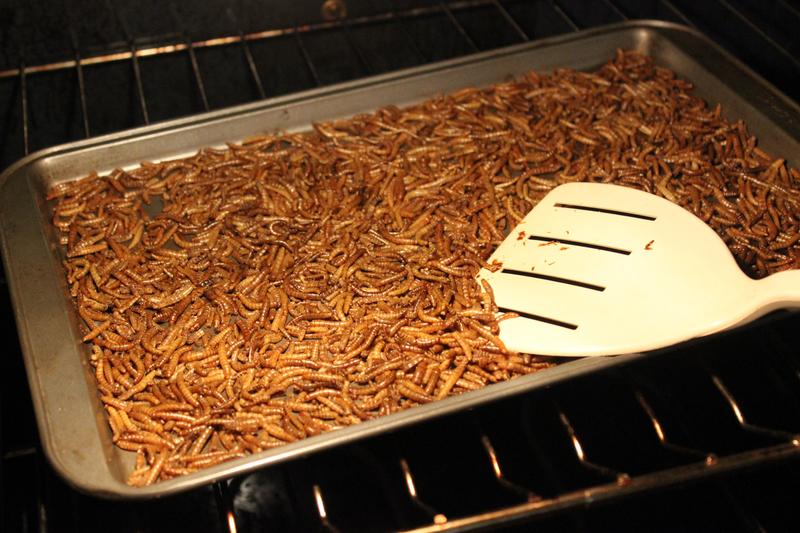 I’ve been hanging out with too many vegans lately. Even though they never make me feel guilty for eating animal products, nowadays I do find myself being wary when I choose my meals.

I would totally become vegetarian, but what’s holding me back is that I’m not too sure what is a healthy choice for both myself and the world. I’ve read articles on how the human body has evolved to obtain certain nutrients that only meat can give us. I’ve heard farming soy was bad for the environment. It seemed like I could never win with diets. That is why when I heard about a panel by Common Energy UBC about food sustainability called "Go Veg or Eat Bugs?" I was keen to go.

What does it mean to eat sustainably? Everyone knows how to traditionally be sustainable — recycle, don't pollute, etc. However, people tend to forget one of the most environmentally impacting choices they come across daily — their diet. I was shocked to find out at the panel that 18 per cent of greenhouse gas emissions actually come from livestock farming, more than the 13 per cent that transportation emits. The meat industry is harmfully and energy-consuming as well. For example, to produce one burger, it takes one gallon of water.  With such large amounts of energy needed to produce meat, deforestation and water disparity occur when raising and maintaining the livestock.

This is why Common Energy UBC discussed the idea of turning to insects for a source of protein. According to Dominic Goulet, the guest speaker at the panel who harvests his own insects to eat, crickets are 2000 times more water efficient and emit 1800 times less greenhouse gases than cattle. They are also 12 times more efficient than cattle at converting feed to body mass, which makes them more resourceful. Also, they are nutritional powerhouses, containing essential amino acids, B vitamins, iron and more.

Less is wasted as well as generally only 40 per cent of cows are eaten, whereas 80 to 100 per cent of a cricket is eaten. In terms of animal welfare, some may have a problem with the amount of deaths occurring when farming insects. However, in the agricultural system — especially vegetable and grain production — there are millions of insect deaths caused by pesticides. A solution could be dual-farming, where grains and insects can be harvested at the same time.

With all these facts dropped onto me, it seemed like a really good idea to start eating bugs. The only thing holding me back was that the actual idea of digesting a pest was slightly nauseating, but my mind was changed after trying them at the panel. I found out caramelized crickets are pretty darn good. They taste like potato chips, but lighter. As for the cricket cookies, they just tasted like gluten-free biscuits.

Who knows when insects will universally be taken seriously as a source of protein, but the main point of the panel was so that people could start a conversation and spread awareness of eating sustainably, which is impacting already.