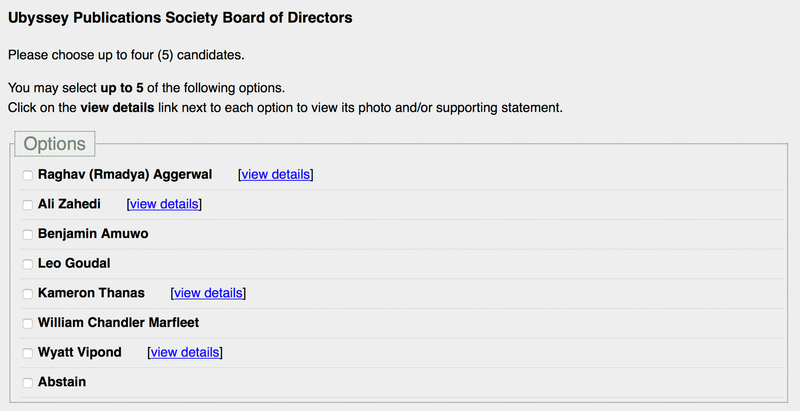 You might be surprised to see this — confused even. AMS

You and I know how to count. One and then two and then three and so on. But the hardest part for me — and seemingly the AMS Elections Committee — is telling them apart.

In The Ubyssey Board of Directors vote on the AMS voting website, they say you must pick four candidates for the positions, but then clarify (unsuccessfully) with the number “(5).”

You might be surprised to see this — confused even. Most people know that the numbers four and five are different. But that doesn’t explain why they were being equated in AMS election software. The AMS prides itself on its efficient policy and squeaky clean veneer, so how did this happen?

Maybe the AMS elections team had a lapse in mathematical ability? Maybe we’re supposed to guess how many candidates we’re supposed to pick? Maybe no one bothered to thoroughly proofread this extremely important website? After all, it’s not the only mistake they've made this elections season.

Whatever the answer, it’s clear that the numbers four and five are very, very hard to tell apart.

If you still haven’t voted and you’re unsure of who to vote for (because we get it, picking between four candidates and five candidates for people you’ve never heard of is really hard) we’ve made a voter compass that will help you make an accurate decision.