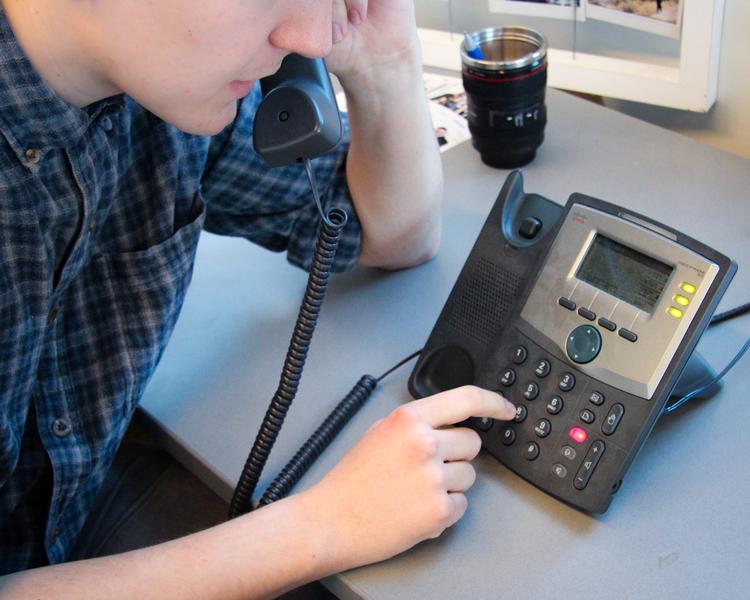 I just ended that voicemail by accidentally saying “Love you, bye!” Jesus, does that constitute harassment? Elizabeth Wang

4:05 p.m.: This week we’re asking for money to build a giant laser to finally destroy SFU. The phone has been auto-dialling numbers for five minutes and not a single person has picked up. This is probably because no one with a good job is home before 5 p.m.

4:20 p.m.: I just ended that voicemail by accidentally saying “Love you, bye!” Jesus, does that constitute harassment?

4:35 p.m.: Another pick up, I launch into my speech, and they quickly cut me off. “I just graduated, I have twelve thousand dollars in student loans, and you want me to donate five hundred dollars to fund a laser?” I have no reasonable explanation as to why anyone would ever donate so much money to an institution that blows hundreds of thousands of dollars on lasers – erm, I mean academic defence machines.

4:50 p.m.: I get onto a call with a very concerned mother who has many questions about how her child is going to make friends and succeed at the university.

6:35 p.m.: It has been 45 minutes and I have walked this poor, sweet woman through three panic attacks. I have assured her that her child is not going to fail that one CHEM course, and if they do it won’t really matter. I have warded off six requests to hand out my personal phone number so that their child could “get in touch if they needed help.” The mother is in tears. She is thanking me profusely for the work I am doing, and is telling me that she hasn’t felt so secure in her child’s ability to succeed since they arrived at UBC two months ago.

8:30 p.m.: It’s been two hours. I have not been rejected at this frequency and speed since I was using Tinder. I consider setting my headset on the desk and just walking out. I see the glossy image of the design of the laser, and I remember my duty.

9:15 p.m.: I think of the faces of SFU students. We’re taught to remove the humanity from them, you know, because we want to destroy them with a laser.

9:25 p.m.: I have another parent on the line. After answering a few questions, I pop the question which I already know the answer to: “Would you like to donate $500 to the UBC Laser Fund ?” I immediately open my mouth to move onto to our next ask when I realize the man is spouting out numbers. Have I officially lost it? Is he speaking in code? No, it’s his credit card number! I hastily start typing it into the system, unable to believe that someone has $500 to donate to a multi-million-dollar laser when I don’t even have $500 to my name.

9:30 p.m.: The payment has been processed and I’ve hit my quota, which means I have half an hour to coast through before I get to go home and eat the microwavable dinner that this paycheque will afford me. I play Tetris in my head. I doodle lasers all over my script.

9:57 p.m.: The auto-dial clicks through to a caller. Oh no, no God please no. It’s three minutes until the end of my shift, I really don’t want to start another call. The supervisor sees that I’ve picked up one last call and gives me a thumbs up. I lean back against my chair close my eyes and start talking.

“Hi there! My name is [Redacted], I’m calling from the UBC Centre for Monetary Excellence, how are you tonight?”

The Dingbat is The Ubyssey’s humour column. You can submit completed pieces or pitches to Angela O’Donnell at a.odonnell@ubyssey.ca.