The Dingbat: The Curse of the Koerner Bell Man 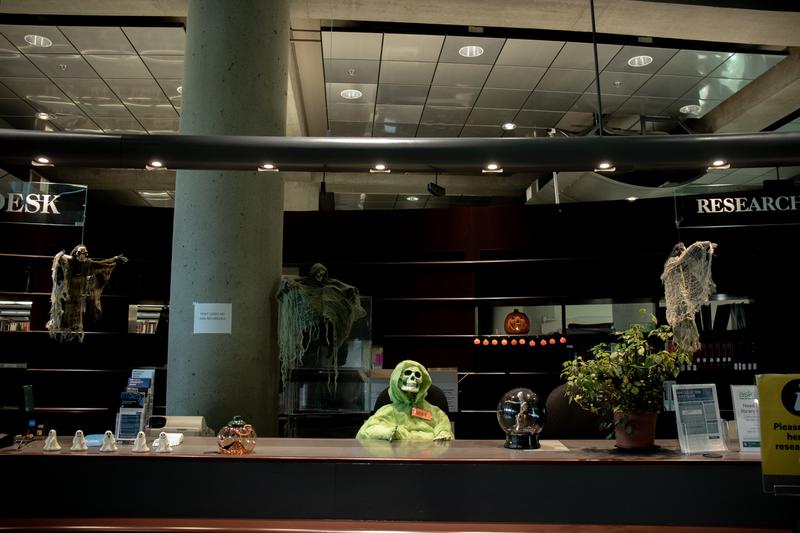 “Quick, lock the door so he can’t get in!” he said, his voice quivering. Sophie Galloway

The first time I encountered the Bell Man was on a Thursday night. Some friends and I had decided to book a study room on the first floor of the Walter C. Koerner Library. All was silent as we studied together and individually wondered why we were studying together if no one was studying for the same midterm. My computer’s clock read 9:51 p.m.

Suddenly, a bell started ringing, echoing through the floor like a harpy’s shriek.

Our heads shot up at the sound and instantly we noticed that the library had been abandoned. Students, once studiously staring at r/UBC, were nowhere to be seen. The only remnants of their existence were the books, backpacks and laptops left behind.

“What happened?” asked one of my friends. Out of nowhere, a student sprinted into our study room and dived under the table.

“Quick, lock the door so he can’t get in!” he said, his voice quivering.

“They call him the… the Bell Man. At 10 p.m. every night in Koerner he comes, ringing his demonic bell, and when he catches you, he–” The student’s voice broke off in a sob.

The ringing had gotten louder. Turning, dread filled my stomach when I saw that the shadow of the Bell Man was by the base of the stairs, only metres away from our study room. Slowly, he started advancing towards us, ring-a-linging with every step.

“What do we do?” I cried out to the group. I was met with a chorus of “pray,” “study” and “cry”. We backed into the far corner of the study room.

The Bell Man had now reached the doorless doorway, staring us down all while shaking his infernal bell. The student under our table let out a whimper.

In a moment of adrenaline, I flung my 500-page Introduction to Politics textbook at his head, hitting him squarely in the chest instead. He was momentarily stunned by the fact that I had paid $120 for a new edition from the UBC Bookstore and we seized the opportunity, fleeing past him and up the stairs until we could taste fresh air. Outside, we joined the group of terrified survivors who were already on their phones staring at r/UBC.

“We survived!” declared one of my friends.

“Wait,” I said. “What happened to… uh… that guy?” Everyone looked around and shrugged. Just then, a scream came from the library.

“May Susan E. Parker have mercy on his soul,” I murmured. Another student gave us a look as they walked by and shook their head.