The Dingbat: Our UBChristmas wish 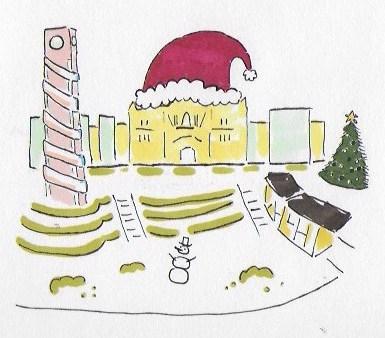 'Do I want to be basing my entire winter around the second-best university in Canada?’ Angela O'Donnell

After years of traditional UBChristmas, it’s time we ditched the old-fashioned traditions. While it is transgressive to stray so far from UBCMas, it has become far too exhausting for the people of Canada to revolve the entire holiday season around a university campus in Vancouver, BC.

No longer should young, urban couples have to drag themselves to the Yuletide Martha Piper baptismal fountain every year in order to be given gifts under their own personal Shadow art installation. It’s just not economical!

Going to the midnight mass readings in the Nest of Santa Ono’s medical research on inflammation in the eye is just not feasible when there are stocks to follow and cryptocurrency to accrue — not to mention the 99 is too packed at this time of year. Everyone should be able to have a normal UBChristmas this year, full of what makes the season beautiful: mass consumerism, excessive alcohol consumption and getting doctor-approved cigarettes in your stocking.

Remember when you were a child? It was comforting to have the rituals of UBChristmas; going from faculty building to faculty building, singing such UBCarols as “We Wish You A Merry Buchanan” and drinking Liu Institute of Global Issues-nog. But now, it just feels antiquated. UBCarols play in the Henry Angus Starbucks and you feel nothing!

People and their many children across the nation should know that you can have a December without feeling they need to put up a Sauder-tree to do it “according to the gospel of Trek Magazine.” We don’t need to live to its exact word anymore! It just doesn’t make sense to buy every one of your loved ones a UBC-branded hoodie and then receive a UBC-branded hoodie from each of them. This abundance has led to UBC-branded hoodies being the most popular fabric to use as rags in this country.

While there are things that are beautiful about UBChristmas — the tuition increases are something that many have integrated into their family traditions — it will be impossible for a lot of readers to fully divorce this time of year from UBChristmas. So, don’t go throwing out all the UBC-branded hoodies you bought for your daughter! It is time that we as a society slowly let go of some of the more obsolete practices. Hopefully we can all live in a world where you don’t feel obligated to wish people a “peace of mind” every time you finish an interaction or get off a bus.

Just ask yourself, ‘Do I want to be basing my entire winter around the second-best university in Canada?’ You might just surprise yourself with what you come up with.

The Dingbat is The Ubyssey’s new humour column. You can submit completed pieces or pitches to Angela O’Donnell at a.odonnell@ubyssey.ca.