The Beaty whale is getting vacuumed this week 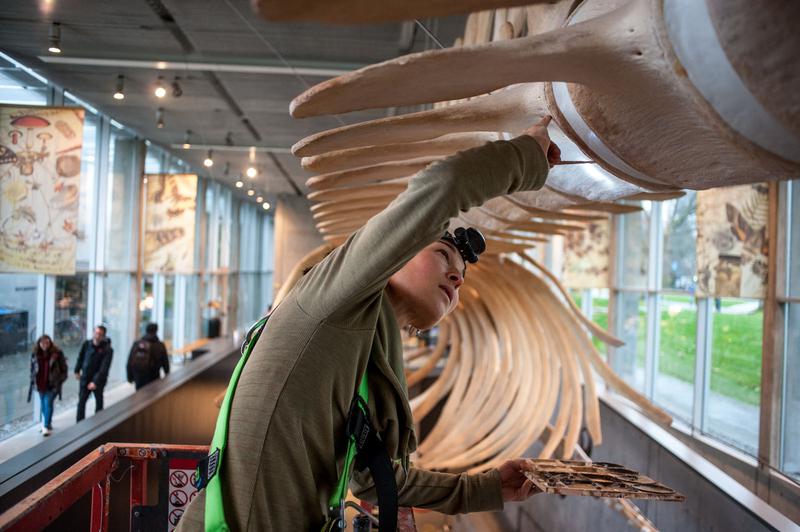 You know that giant hanging whale skeleton in the Beaty Biodiversity Museum on Main Mall? This week, it got some much needed TLC and cleaning for the first time in five years.

The skeleton is made out of an actual whale skeleton and replica bones — the real bones that aren't hanging are under the ramp leading down to the museum, according to Chris Stinson, curatorial assistant of mammals, reptiles, and amphibians at Beaty. The skeleton itself is from a 25-metre long blue whale that washed up on Prince Edward Island in 1987. It was later dug up, restored and hung in Beaty.

"It had a lot of dirt on it, there was a lot of dust," said Stinson. "We collected a couple of insects from on top of the skull. They're actually in our insect collection now."

Most of the cleaning was done by vacuum cleaners with brush attachments. Parts of the skull were cleaned with soap and water. An artist will also paint over exposed areas of plaster that were used to seal cracks that formed when the skeleton was initially mounted over its metal frame.

The museum will continue to monitor the whale to see if any cracks form and to determine how often it should be cleaned as it is the largest suspended whale skeleton in the world.

During the cleaning, Stinson wrote the whale's accession numbers — the catalog number every specimen gets — in the joint of the jaw. The whale is the 17,999th mammal in the collection.