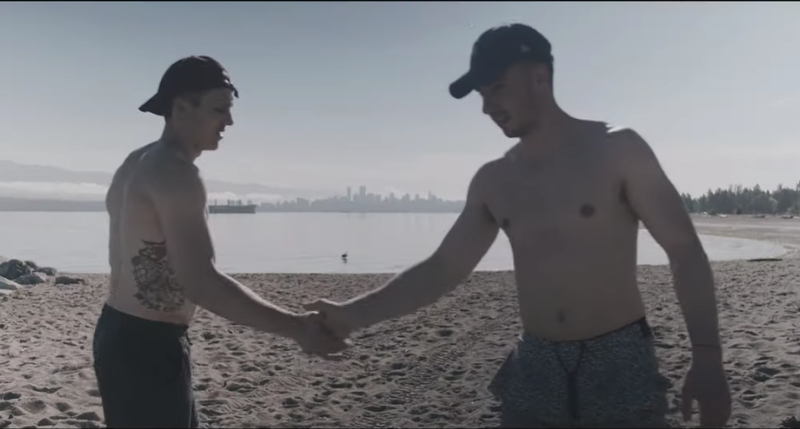 I am very grateful to have seen it. Screenshot Sigma Chi/Youtube

This week, fresh-faced young men across campus will be rushing to join one of the many frats that are allegedly different from one another. Of the 10 frats on campus, four made videos giving us all a peek into the life we could have if we paid the necessary fees and are a man. The videos put together by Beta Theta Pi, Delta Kappa Epsilon, Kappa Sigma and Sigma Chi respectively show us that being in a frat makes you cool, manly, very fit, chill and masculine.

As a cis-man in the modern era, I am in the constant need for confirmation in my feeling of masculinity. Sometimes if the weather is a bit off, maybe I didn’t have a big enough breakfast, I’ll become devoid of masculine feelings. This is why I’ll be rating the frat intro videos by how masculine they make me feel.

Beta Theta Pi is probably best known to us all as the frat that always has some bullshit like a couch out front. But If you consider platonic male bonding a major part of masculinity, their Rush video is what you’re after. The slow, majestic drone shots — which we’ll see a lot of in this list — contrast beautifully with the throngs of men fist bumping, high-fiving and, I’ll go right out and say it, bonding.

Coupled with hundreds of men in coordinated rugby shirts are clips of shirtless men working out with lots of artful dust in the air — very masculine if I don’t say so myself. It really makes you want to gather up a few dozen of your closest friends, put on the same shirt and just toss the ol’ pigskin around.

Delta makes a lot of…interesting artistic decisions in their Rush video, none of which made me feel that masculine. It starts out great with a drone shot, one of the best types of shots, but then makes a hard-left into strange computer animation. Imagining myself very small and in a keyhole unlocking a door with my face, head and neck? No thanks! I’d rather be big and be smashing a lock with my face, head and neck.

Otherwise the video tries a little too hard. There are these very strange cuts to random things like sports cars and jumping into the ocean, which are kind of make me feel masculine if I squint my eyes.

The Kappa Sigma Rush video can be seen here.

While there are none of my favourite shots — drone shots in case you were wondering — it does make me feel masculine in moments. The feel of this video is much different than the previous ones. It really goes out of its way to mimic the motivational videos that people who are training for sports like to watch, which did give me a little jolt of masculine-feelings. One of the video’s biggest flaws is the 30 seconds of credits attached to the end of the video, which really drained any masculinity I had gained from the video.

It did also have a guy doing bike tricks which is something I’ve always wanted to do, so good for him!

Okay. So about this video. First off, very few drone shots which is a big mistake.

On the surface, it makes me have a lot of masculine feelings. There are like dudes working out and making business deals while there’s an audio of a guy giving us platitudes about not giving up plays in the background. There are a lot of slow-mo shots that emphasize that feeling masculine sometimes is observing the small details of movement.

But, it’s a little over the top. I sort of felt too masculine way too quick. As soon as that masculine feeling peaks, it forces you to examine what you’re looking at. Let me tell you, seeing these guys — all power-brokers in real life I’m sure — pretend to talk business and work out, it sort of reversed all those masculine feelings I immediately gained.

This video is proof that there is a law of diminishing returns when it comes to making me feel masculine — so while not as effective as the others, I am very grateful to have seen it.