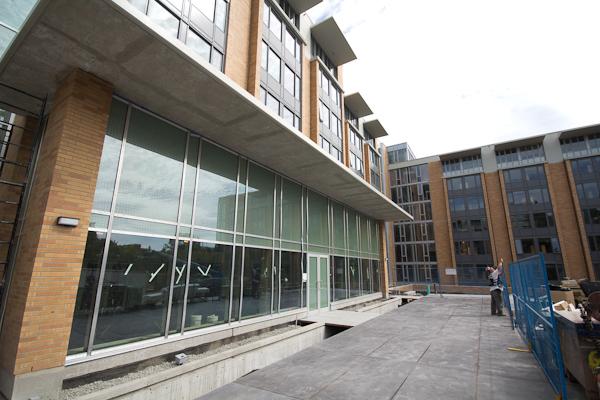 Living on campus is confusing. The sheer amount of residences can be overwhelming to consider. Thinking about more than one thing at a time is confusing, that’s why lists are popular.

Rankings offer clear answers to otherwise unsatisfyingly vague questions. The natural next step is to rank all the residences, but we can go even further. I have made a list of tier lists of all the residences, each with a different criterion. I trekked to each residence I could and gathered data on everything that could ever be important.

Each residence ranked by hallway smell 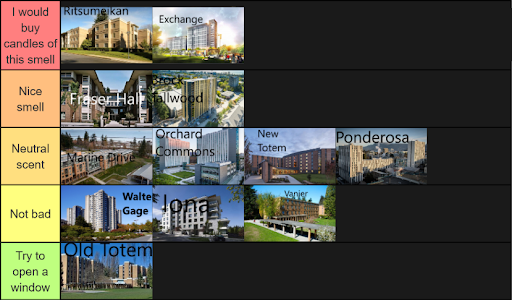 There is a clear divide between the old and new guard of residences. The line is not drawn by actual age, there is just a different vibe in the older buildings that can not be denied. Ritsumeikan is a perfect example, in its 27 years, it has developed a warm, yeasty smell. Exchange is the opposite. Every part of it is fresh. It smells like rain with sweet berry tones. On the other extremity of this tier list, the older parts of Totem Park stand alone. The hallways there smell like a barely operational motel, its odour is dully acrid and stays in the nose longer than it has any right to.

How fast is the elevator in each residence 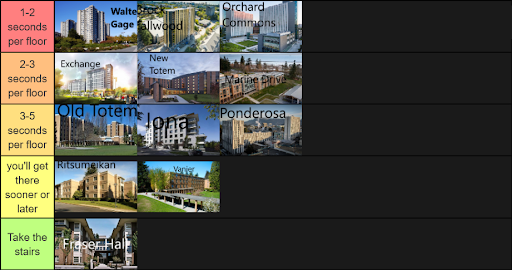 The elevators in Place Vanier is offensively slow. I can understand why Fraser Hall and Ritsumeikan have bad elevators. Both of them on the shorter side and the residents know what they’re getting into. Place Vanier has absolutely no excuse. There are hundreds of students who live in Place Vanier and have never experienced a prompt elevator, tragic.

Largest animal spotted in each residence 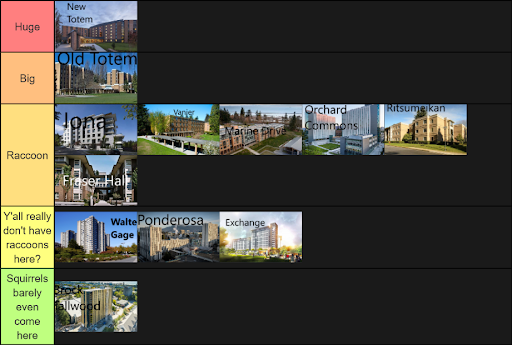 Raccoons are constant in the eastern and southern residences. I am so thankful for and so lucky that I get to study beside the raccoons. Anyone north of the Nest is robbed of the chance of seeing our lovely campus garbage babies. The research for this tier list was difficult, many residents didn’t comprehend the size of animals. Students would say “probably a squirrel”, until being reminded of raccoons. One subject of our inquiry even said: “well it depends if you count a raccoon as bigger, cause I’ve seen way more squirrels.” A resident of the newer part of Totem Park said he saw a bear. While that being the truth is astronomically unlikely, who am I to judge.

Can you sleep in the public lounge of each residence 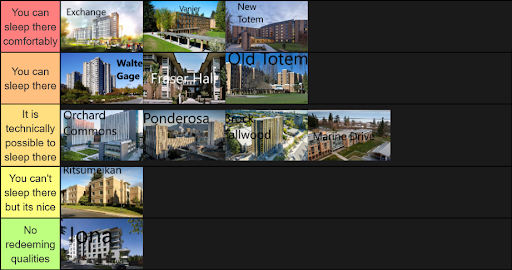 A lounge must be comfy. The word itself demands it, lounge, it says take it easy, lean that chair back, get comfortable. You likely won’t ever have to actually sleep in your lounge. After all, each residence does have beds, but if you can sleep in your lounge it illustrates a standard of comfort. Walter Gage had the largest lounge by far. Ritsumeikan was impossible to sleep in but it had a dojo. Depending on your priorities a dojo could be far more valuable than any lounge.

How haunted is each residence

Iona House is just haunted enough. Something feels wrong about it but it is clean and new. You get the nice clean interior and also an absolutely medieval structure. Walter Gage dim drab lighting and many small floors mean you don’t see many people around. It feels like a level in a mid-2000s horror video game. Ritsumeikan is the most thoroughly cursed residence. It’s hallways twist and wind with panels knocked off from flooding. The death throes of the Ritsumeikan elevator are heard in its steely whine. Consider this a warning. 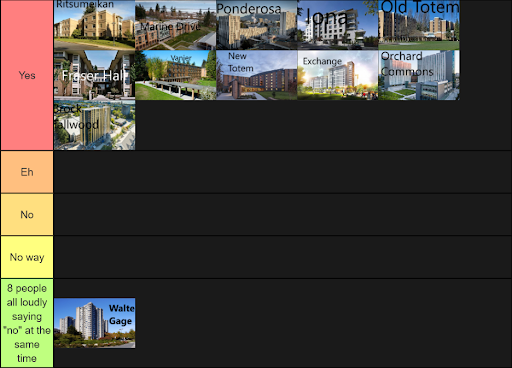 I only asked one person at each residence and at each I only received one response, well, except for Walter Gage. I asked one resident and got eight people resoundingly warning me about living at Walter Gage. If you know anyone who lives at Walter Gage: shoot them a text, invite them to a party, give them a hug. None of us can hope to imagine the hardship they are going through.