‘Vegans of UBC’: What it's like being plant-based on campus 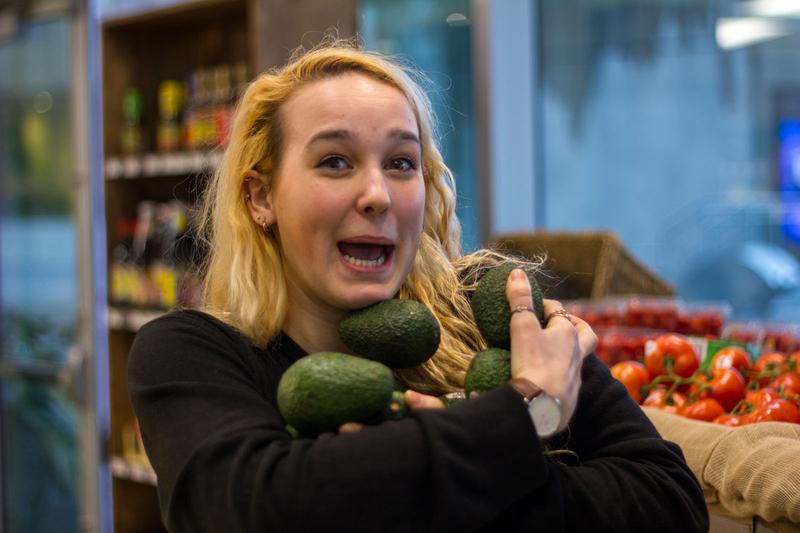 The girl with all the avocados. Jack Hauen

Before being officially approved as an AMS club last September, the seeds for the creation of Vegans of UBC were sown when Leia T’ien and Aïda Retta, the club’s co-president and treasurer, met a girl with a lot of bananas.

“We just started talking and I noticed all her bananas and said ‘okay, this girl literally has three bunches of bananas, who has that many bananas except someone’s who’s making lots of smoothies?’” T’ien said. “Ding ding, vegan!”

They started to talk about veganism and it turned out that both parties were planning to start a club for vegans on campus. T’ien, Retta and the girl with bananas, whose name is Julia Hill, decided to join forces.

According to Chloe Repka, a third-year arts student, the purpose of Vegans of UBC is to raise awareness and to bring fellow vegans together.

“A lot of the time vegans don’t have a lot of vegan friends, and that gets really frustrating,” she said. “So it’s bringing people together, spreading awareness. It’s a new club, not much is happening yet but I’m sure that we’re gonna run some campaigns and stuff like that.”

The reception to the club has been very positive so far, with many of the group members attesting to the amount of excitement that new recruits show when they discover the club.

“We had a booth at Imagine Day, and we had a lot of people coming up to us and saying ‘wow, I wish this was a thing sooner!’ or ‘I was looking for a club like this,’” said Sera Bau, the other co-president of the club. “That’s a big part of why we wanted to make this club — we wanted to form that community and form that sort of a place where people could gather and also share resources and just hang out.”

When asked about the benefits of veganism, the club members all discussed “the three pillars” of veganism — for the animals, for your health and for the environment.

“It’s a moral or ethical decision that we make because we feel like it’s not justified to use animals for our own purposes in that way,” said Cassie Millar, a first year arts student. “For our health, there’s a lot of scientific backing that we could use, but like even just personally I feel so much better since being vegan.”

Retta then cited the work of Dr. Michael Gregor, who’s book How Not to Die argues that a plant-based diet can be effective in preventing chronic diseases such as heart disease.

On campus, the club has gripes with first-year dining halls. In particular, Millar complained about their lack of allergen labels on some items, the fact that vegans are obligated to pay for a meal plan from which they have limited options and their inconsistencies with keeping certain foods free of meat or dairy.

“One of my friends, she’s vegetarian and she ordered a vegetarian pizza and there was pepperoni inside it when she ate it.”

Millar had a similar issue with the dining hall’s veggie burger.

“I told them every single time that I ordered it that I have a dairy intolerance. I ate it three or four times, and then the fourth time they told me that there was cheese in it from time to time, and they had never told me and I had already eaten it … Imagine if somebody was deathly allergic and they’d never bothered to check the ingredients? And even if you’re not allergic, if you’re vegan and you haven’t eaten dairy in a year, your body has built an intolerance to it so it can still make you sick.”

Vegans of UBC are also interested in countering common misconceptions about vegans. For one, T’ien claims that veganism is not actually a very expensive diet.

“So if you kind of know where to shop and figure out the best places, then it becomes very sustainable, very easy to maintain, even on a tight budget. Beans, rice, all the staples like that, it’s not expensive, it’s not just for rich people,” she said.

Importantly, Millar set out to disprove the myth that vegans are judgmental.

“Sometimes I’m hesitant to tell people I’m vegan because I think I’m gonna start yelling at them about [eating meat],” she said. “I don’t care. I grew up eating meat. I used to be you, I’m not gonna judge you for your choices. If you want to know more about it I’d be more than happy to talk to you about it but I’m not gonna push my agenda on you if you’re uncomfortable or anything like that.”