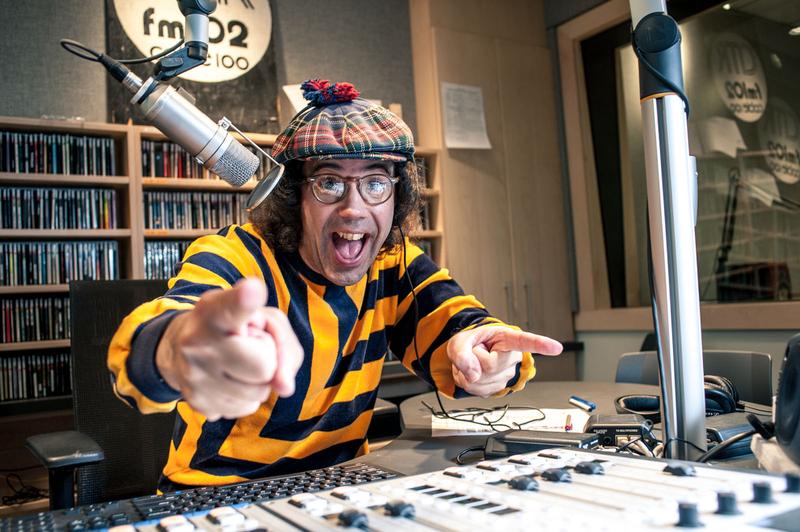 Usually dressed in a golf cap, plaid pants and a tacky collared shirt, Nardwuar can look like a cross between a lumberjack and a David Lynch character. But beneath the camp, he’s a leading profiler of the world’s most famous artists — a sort of counterculture David Letterman who is as insightful as he is disarmingly different.

The Human Serviette, as he calls himself, has a seemingly psychic knack for uncovering out the most obscure tidbits of an artist’s life – whether it’s Tyler, the Creator’s favourite jazz or Kendrick Lamar’s favourite Compton haunts.

“It’s pretty scary,” said Pharrell Williams during an interview. “You’re either psychic or you have a secret viewing tower.”

But even after interviewing everyone from Jay Z to Kurt Cobain to both Trudeaus (yes, really) Nardwuar still feels fresh.

“It still feels brand new,” he said, gesturing out to CiTR’s main studio — where he will spend a full 20 hours on September 22 to celebrate 30 years on the airwaves.

After three decades of broadcasting his Friday programme, Nardwuar has become one of CITR’s icons. Even the turntable mats have his face printed on them, along with his signature farewell jingle of “doot doola doot doo.”

But before that, like everyone, he was a student.

From red jackets to plaid pants

The Human Serviette began his career at UBC as an engineer. But while his dad pushed him to earn his red jacket, he found it wasn’t for him.

“I flunked out, and I ended up in arts! I did the complete opposite of being an engineer.”

As an arts student, Nardwuar excelled at pushing the envelope. He once filmed a trick-or-treating adventure at Vancouver millionaire Jimmy Pattison’s house, and then layered it over footage of Expo 86 to create a surrealist film for a class project.

He showed a clip of him at Expo 86. In it, a young Nard asks a reporter in his signature helter-skelter voice: “Why do you like Expo 86?”

The reporter turns to him, blinks, and says: “Because it gives me the opportunity to meet crazy people.”

But what other people call “crazy” Nardwuar sees as extraordinary. For him, CiTR’s brand of play-what-you-want rogue radio was a natural home, a place where his bizarrely brilliant brand of music journalism would not only be accepted, but welcomed.

In 1987, Nardwuar (then known as John Ruskin) walked into CiTR with a nifty idea for a broadcast — 24 uninterrupted hours of tapes about the assassination of US President John F. Kennedy.

“It was scary doing that,” he joked. “I was worried that when I went to the washroom, people would come and get me or something.”

Since that initial broadcast, Nardwuar’s pursuits have gone mostly to music, but have also gravitated to politics.

As a CiTR journalist, he once told former Soviet leader Mikhail Gorbachev to “keep on rockin’ in the free world” in Russian. He was later kicked out of the press conference when he asked Gorbachev which world leader wears the biggest pair of pants.

“Gorby” (as Nardwuar calls him) cracked a grin. But not everyone reacts so well to Nardwuar’s odd but genuine style. Over the years, some artists have turned hostile to it — Nas, Blur, and Sonic Youth to name a few. But if anything, Nardwuar appreciates the honesty.

“Your enemies tell me what’s wrong, but your friends let you rot,” he explained. “I remember one time a guy ran up to me and said ‘You’re Nardwuar! You play in that band the Evaporators! You guys suck!’

“And I said, ‘That’s so great you remember our band name!’” he laughed.

Nardwuar has also made a quest of asking Canadian prime ministers to do the “Hip Flip” – a 1960s retro game that is, well, pretty much exactly what it sounds like. To this date, Nardwuar has hip-flipped with Paul Martin, Jean Chretien, Jack Layton, Michael Ignatieff and Justin Trudeau.

But Nardwuar’s interest in Canada goes well beyond hip gyrations. He graduated in 1990 with a BA in history, with a special focus on Canada-US relations – an interest he shared with his mother who published a whole book on Gassy Jack, Gastown’s namesake. Nardwuar’s band, the Evaporators, also have a discography dotted with Canadiana, from their Ogopogo Punk LP to their 2007 record Gassy Jack and Other Tales.

“My mom actually helped me with the song,” he said. “She told me what was up.”

“Under a maple try at Water and Carrel/Gassy Jack rolled out the barrel/Talking and talking and telling jolly tales/led to a name that didn’t affect sales,” he said with a smile.

The Evaporators don’t play too often, but that’s mostly because Nardwuar seems to be eternally busy. Between a radio show at CITR, his guerrilla journalism and his constant preparation for the next big interview, Nardwuar seems to never physically tire.

The next big exploit

A 20 hour long nonstop broadcast to celebrate his 30th anniversary will be broadcast at CiTR this Saturday, September 23, which will be followed swiftly by an all ages concert at the Hall at Commercial and Venables.

Where does he get the energy? Himself, it would seem.

Nardwuar gets excited about, well, pretty much anything. He launched into a brief history of how Hendrix used to back up Vancouver act Curtis Knight and the Squires, raved about the fine points of 60s garage rock and flipped through his upcoming radio show schedule – all within 60 seconds.

If anything, Nardwuar thinks his biggest challenge is yet to come.

“There [are] many people still to talk to,” he said. “I would love to try and talk to Donald Trump. I fucked up, because he did a press conference in Vancouver a couple years ago, but I was ‘too busy’ to go.”

“I would love to do an interview with Kanye West someday,” he added.

30 years after he started, Nardwuar has become an indie icon, a symbol of what makes CiTR – and Vancouver – weird, wonderful and constantly growing.

“If I can do it, so can you,” said Nardwuar. “Keep around in the game, and you’ll eventually meet your goals. That’s why I haven’t retired yet, because I haven’t met my goals.”

“There will always be people to talk to,” he finished. “As long as you can hold a recorder.”