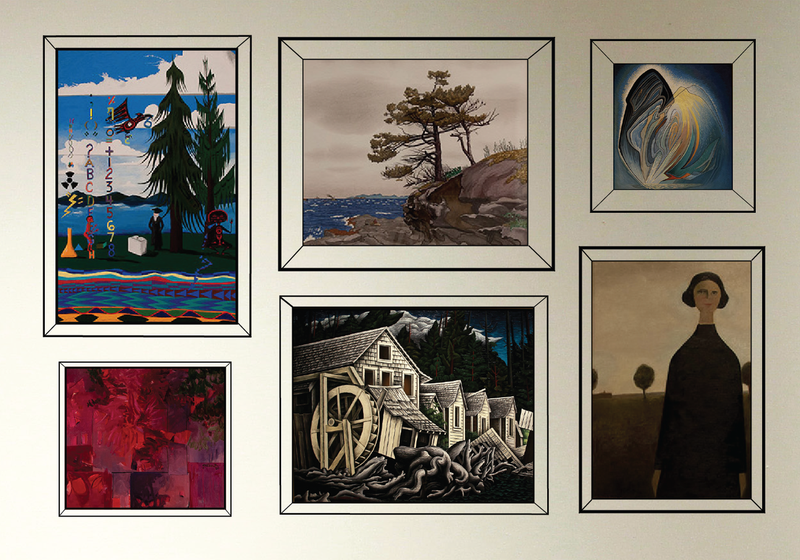 What should the purpose of one of the largest and most significant student art collections in Canada be? Design Claire Lloyd/Photos courtesy UBC Department of Art History, Visual Art and Theory and Elizabeth Wang/Art AMS permanent collection

After significant time spent out of the public eye, several pieces of the AMS-owned art collection were displayed for a short stint at the Hatch Art Gallery.

In an exhibition titled Contesting Paradise: BC Landscapes in the Permanent Collection, the gallery hopes to showcase the current state of the collection, and how it represents the canon of Canadian art history over the decades of the collection’s existence.

First developed in the early 1950’s, the collection carries a total value of over $4 million with several pieces being acquired by donation or for small fees during the initial years of its growth. A prized piece by Quebec-born Jean Paul Lemieux’s Jeune fille en uniforme was recently sold by the Heffel Art Auction House for $361,250 this past October.

The collection carries substantial costs for maintenance and preservation, which can be covered by the proceeds from selling select works. In addition, there has been much speculation about whether this funding should go towards the acquisition of new pieces for the collection.

This raises the question: What should the purpose of one of the largest and most significant student art collections in Canada be? Is it about selling and acquiring pieces to cover costs and grow the collection’s value, or to represent a tradition of the appreciation of Canadian art at UBC?

The theme of the works selected for display in Contesting Paradise is easy to identify, with natural landscapes of British Columbia. The real message, however, shows itself to the viewers as they transition to the newer works on display.

The collection begins with works like the Group of Seven’s Lawren Harris’ Northern Image (1952) that portrays an idyllic view of British Columbia’s landscape, but one that has been criticized in the past for omitting the presence of Indigenous peoples in an untouched ideological landscape.

Moving onwards, the presence of industry overtakes the picture in E.K. Hughes’ Abandoned Village, River’s Inlet BC and Molly Bobak’s Fishboats at the Mouth of the Fraser. This reaches a modern-day context with Roy Arden’s photographic work Development #1, an all too familiar viewpoint of unchecked urban development that seems ahead of its 1993 release, as any UBC student taking the 99 B-Line past the Lelem development in a recently “repurposed” portion of the Pacific Spirit Park can attest to.

Finally, Lawrence Paul Yuxweluptun (Coast Salish/Okanagan) gives a much-needed Indigenous perspective in Untitled, which critically examines the relationship between UBC and the continued presence of the First Nations on the unceded territory it inhabits.

“We wanted to subvert it [the theme] a little bit,” says Leo Cocar, assistant director of the Hatch Gallery. “There’s this kind of turnaround from untouched nature, and you move on to industry and then you wrap it up again by returning to nature with the Yuxweluptun work.”

Through these perspectives on landscape, the exhibition showcases artists from a range of perspectives and backgrounds. However, dealing with the bias towards male European artists is definitely a challenge that the collection faces when hoping to represent Canadian art history as a whole.

When asked about how the collection’s managers hope to address this lack of diversity and representation, Hatch Gallery Manager Maxim Greer spoke of how slow moving the process of acquisition and commissions can be.

“We would love to have to artists of different backgrounds but that’s just the way Canadian art history and UBC art history developed,” he said. “In the 1970’s and 80’s we started to see more voices of women and people of colour, more Indigenous people coming forward. In this case, we had to work with what we have.”

The collection should not be viewed as a celebration of a particular era of Canadian art, but rather a recognition of the transition from the Group of Seven movement that was essential to our sense of national belonging yet controversial (how can you portray Canada without the presence of people?), to an art landscape that accepted the perspectives of women, Indigenous people and people of colour in the 70s and 80s.

For better or for worse, the collection displays a narrative that — despite being incomplete — still belongs to the UBC community, and it is slowly changing to do better.

Looking ahead, there is a desire to return the collection to the visibility and prominence it enjoyed in years past. This is something that the Hatch seeks to accomplish with future exhibits and the acquisition of new pieces.

Greer referenced the early years of the collection’s existence in the 1950’s and 60’s when it saw significant growth and involvement with students.

“I don’t know if we’ll ever get to that point again, but there is a really dedicated community that needs to be reminded of its existence.”

The collection is currently being displayed at the Hatch Art Gallery in the 2nd floor of the Nest. The closing reception is on March 7 from 6 to 8 PM.