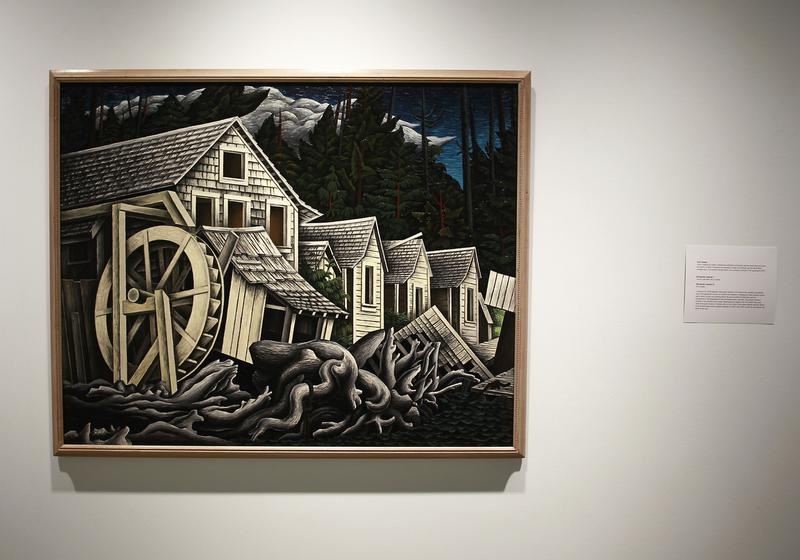 “Abandoned Village, Rivers Inlet” by EJ Hughes was one of the painting up for sale. File Elizabeth Wang

This was AMS President and Sale of Hatch Art Planning & Execution (SHAPE) Committee Chair Chris Hakim’s call for a “unanimous vote” in the SHAPE Committee to determine the fate of two pieces of art worth over $1 million from the AMS’s permanent collection, according to three members of the SHAPE Committee.

Shortly after, everyone stood up and left, leaving the people in the room who weren’t AMS executives or employees stunned.

“When the unanimous vote came down, I was expecting them to be like, ‘Okay, let’s vote on this issue,’” said SHAPE Committee member and Visual Art Students’ Association (VASA) President James Albers. “In that moment, that’s when we would be like, ‘no’. But the vote came down to Chris [Hakim] literally saying, ‘We cool? Okay, cool.’ And then he adjourned the meeting.”

Following the committee meeting, the UBC art community spoke up at the February 26 council meeting, providing context for the collection and urging councillors to not approve a contract that would essentially guarantee the sale of these works.The contract was tabled, with more conversation to come.

The situation has been chalked up as a misunderstanding, but it has given the art community a platform to give more attention to the AMS’s permanent art collection and the importance of understanding the context of the collection before selling any of it.

This issue isn’t new — since 2012, the AMS has been considering selling art pieces from its permanent collection and since that time opposition from the art community has existed, a situation that Yasmine Whaley-Kalaora, the assistant director of the Hatch Art Gallery called an “inherited issue.” “Abandoned Village, River’s Inlet” by E.J. Hughes was one of the paintings up for sale.

In 2012, a referendum passed allowing the AMS to sell three pieces of art, with a one-year time

limit on the sale. But the sales never happened and in 2017 the question was sent back out to the students. This time, without a time limit and authorizing — not requiring — the AMS to sell up to four pieces of art. At the time, the AMS said that selling the four most expensive pieces would reduce their insurance costs by $15,000 and would gain a significant amount of financial interest for the AMS endowment fund, where the money from sales would be directed.

Following that, the ad-hoc SHAPE Committee was created. This year the AMS jump- started the work of the SHAPE Committee, chaired by Hakim. Current VP Administration and incoming AMS President Cole Evans has also been integral in the process.

Last fall, the SHAPE Committee was presented with two pieces to sell and the members of the art community on the committee voiced their concerns with the sale of the pieces.

“[We explained that] this doesn’t really make sense to sell these because [of the] history. So we’ve grounded it in that and then it got taken back and reconsidered,” said Kiel Torres, the Hatch Art Gallery director and a non-voting member of SHAPE, while she has voted during the two SHAPE committees that took place this school year.

The follow-up meeting presented the pieces that were eventually brought to AMS Council: E.J. Hughes’s “Abandoned Village, River’s Inlet, BC” and A.Y. Jackson’s “South of Coppermine.”

Hakim said no one had points of contentions at the committee meeting apart from pricing.

While the Hatch director and the VASA president both didn’t agree with the sale, Torres explained that there was a misunderstanding on the purpose of the meeting. To her, it felt like the sale had already been decided.

“It was more of just reviewing the contracts that people had provided and seeing if there are any issues with the technical side of the sale. But there wasn’t necessarily a conversation about the works, but it just wasn’t really a place for that, which was something that I had misunderstood,” Torres said.

Both Evans and Hakim emphasized this “miscommunication,” saying that it was based in the fact that these representatives aren’t familiar with student government.

“For individuals who are well-versed in student government, it’s very typical [to] ask for unanimous consent and be like ‘okay, everybody, good. Nobody’s raising any qualms. That sounds good,’” Evans explained. “But if there was an expectation that the voting would be conducted differently, then I can definitely see how there might have been some indication.”

Albers said they didn’t feel like they were properly educated in how the meetings worked. “We doubted our ability to be able to sway the Committee against the sale,” Albers said.

“Instead, we thought that it would be best to advocate for Kiel and Yasmine to give a presentation at the Council meeting.”

At the Council meeting, Torres and Whaley-Kalaora both spoke and a statement was read from the department of visual arts backing up the claims made by the Hatch directors.

“This was [our] chance to gain greater visibility of the issue,” Albers said of the Council presentation. “Because if we were to sway our decision during the committee ... the issue would live and die there, in a room with seven people, and that we didn’t want that to happen.”

The collection in context

With the motion to sell now tabled and movement towards more transparent discussion in the works, Albers said that they got what they wanted out of this conversation. Now people are more aware of the issues of the permanent collection and its importance.

Torres and Whaley-Kalaora said that they’re working to contextualize the collection in its greater history.

“We’ve been trying to communicate the importance of how every single work in the collection operates as like an index of the development of Vancouver art,” Whaley-Kalaora said.

The pieces proposed for sale have their own unique place within the collection.

Whaley-Kalaora said that the E.J. Hughes piece was the first work ever acquired.

“From my understanding, E.J. knew ... the people that started the collection,” she said. “[They] worked out a deal where they would purchase the work at like a discounted rate.”

“It was acquired in very unique circumstances that came out of very deep interpersonal connections that then informed the entire collection as a whole,” Torres said.

“As much as the works are important also the social connections that informed their acquisition is equally as important.” Whaley-Kalaora also highlighted the intention of the artists in this discussion.

“The artists were. ... giving these things up ... on a cheaper budget because they wanted it to be used as a pedagogical resource for the students,” she said.

Hakim and Evans both admitted there have been crossed lines in this process.

“It’s largely been a misunderstanding, which is why after realizing that there was a miscommunication in terms of the process and people’s thoughts, we very quickly brought things back to bring things back to have a discussion about ... the direction we want to move in, in which we’re all happy,” Hakim said.

The AMS plans to meet with the Hatch staff and members of the art community at large to talk about ways to move forward in the potential sale of artwork — a process galleries call deaccessioning.

“I think at the end of the day, we want to make sure we’re doing what’s in the best interest of

students,” Evans said. “If the sale happens … there’s money that goes back into the AMS endowment which contributes more to the money that we earn per year that allows us to provide services for students,” he continued.

The Hatch staff is focusing on developing their internal strategic plan to guide the collection in the direction they want it to go and also to lay out procedures for deaccessioning pieces from the permanent collection to ensure that situations like this don’t happen again in the future.

“Part of our strategic plan is including a curatorial focused [guideline] for deaccessioning and acquisitions to then hopefully inform future decisions about the collection, as they are based in like, the history of the entire thing,” Torres said.

“What became very apparent at the council meeting was that the history of the collection was not known, especially to voting members of council who were essentially the people deciding the fate of these works.”

Whaley-Kalaora clarified that they’re not against deaccessioning works, it would just need to be done “transparently and ethically.”

Torres noted that the Canadian Museum Association guidelines say that no deaccessioning should take place unless the money from the sale is being directed back into the collection, something that they want to happen in this case if works are sold.

Hakim said that he was “very much open” to any returns being reinvested back into the art community.

“If they decide the collection just needs to be sold in the future, then that money [should] go back into making a hotbed for generating new connectivity [between the collection and artists],” Whaley-Kalaora said.

This article has been updated to correct some factual errors and typos, including the titles of the art works for sale, Kiel Torres voting status in the SHAPE committee.