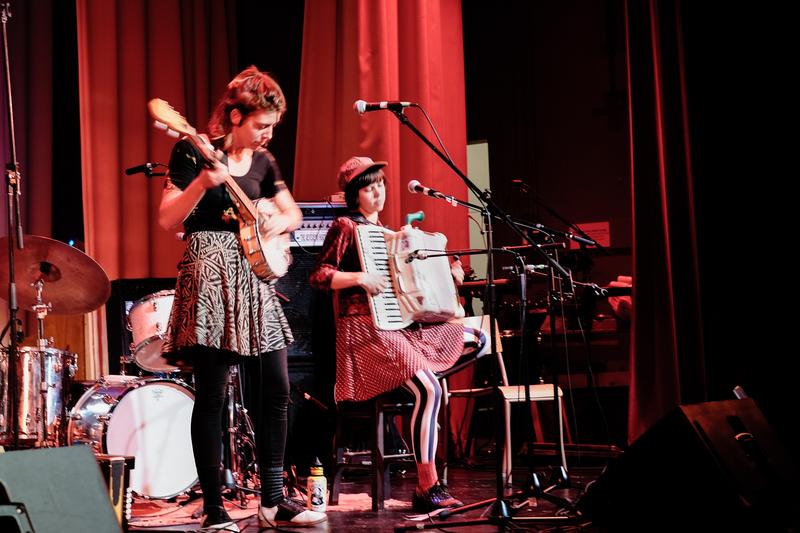 We were waiting outside together, this mismatched group of people. An older couple waited by the door, making sure they would be the first in. An accordion player was singing to help the wait go faster until the doors open. Couples and groups wander in or wander past. I was by far the youngest in the crowd and I wondered if I had made a horrible mistake.

“Alternative accordion festival?” you ask. “I didn't know there were any accordion festivals.” Trust me, I know. I was in that exact position a month ago when the press release came tumbling into my inbox. Of course, I immediately asked our Culture Editor if I could cover it. Screw VIFF, the Noir Festival is clearly where it's at.

My excitement only grew as the grand event got closer. What would this festival bring?

I made the 50-minute bus ride into East Vancouver, past Main to a small Canadian Russian centre. I waited outside and my hope that this would be a super cool, underground indie-alternative festival slowly was chipped away.

After the doors opened, I found a community hall with tables set up. A small cash-bar offering “classy boxed wine” — I'm assuming ironically — was opposite a small bake sale. Everything about this was smaller than I expected. The stage had old Christmas trees in the back and the tables were quickly being filled by the older members of the crowd. There was probably a maximum of 75 people in the whole hall. Apparently this event sold out days ago and now I know why.

I had researched the festival and accordion music before coming. Very popular in Europe, particularly in Finland, accordion music was on the up and up again. When I was younger and had more free time and money, I was a bit more musically literate, but it had been a while since I found a festival that excited me. Nothing, nothing, could have prepared me for this event.

The acts were interesting, that I can say with absolute confidence. They all offered something new with their accordion. Some – particularly the first act, a West Coast duo – nailed the old vintage feeling that accordions and banjos are known for. Others, like Finnish accordion star Antti Paalanen, offered what felt like banger club music mixed with accordion music. Individually they were good. Together they offered little more than a confused musical vibe.

The young people got up to dance. The older crowd sat and chatted with their neighbours. We all learnt a bit of Finnish. Except for the times I got up for photos, I sat in a corner in wonder. It was a strange vibe. I don't particularly know what I was looking for, maybe just a concert whose edgy poster matched their sound.

I appreciate a good marketing plan and I’m willing to admit that, in this case, I fell for it. Seriously, whoever did their posters was out of this world.

But it was less of a concert and more of a community talent show featuring the accordion world's most popular alternative artists, including some West Coast stars. I think if they were able to have a coherent sound I would have enjoyed the concert infinitely more. But the extreme differences in what was being played made it hard to keep up and even harder to enjoy.

I have no doubt that the accordion world is a small one and the alternative accordion music world is even smaller, but the inconsistent sound really limits how much of a following the festival could gain, particularly with students. If they were able to theme their concerts in future festivals, I’m sure they would be able to provide a better night, but as of now – for the night I went – it’s hard to want to go back.

That being said, as much as I was disappointed by the confusing music being played, the Vancouver arts scene needs all the support it can get, even if it’s just a student who’s neither hipster enough or old enough to enjoy this particular festival which — like so many others in Vancouver — is limited by slow funding. But there is still opportunity to grow and gain a real crowd.