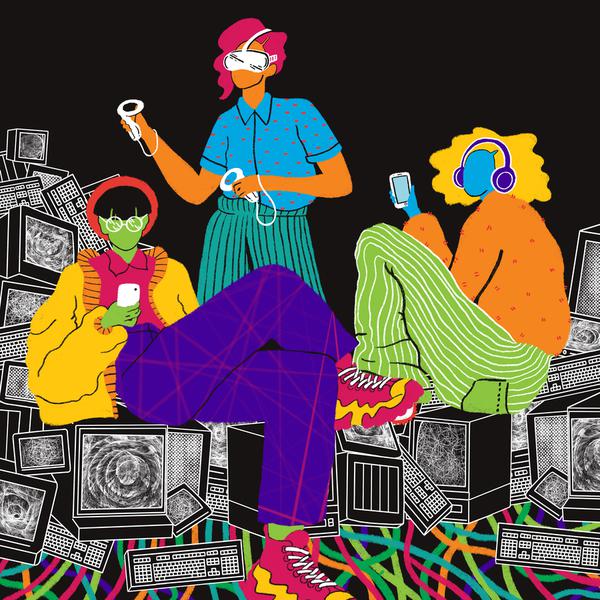 Both artists touched on the topic of ‘gatekeeping’ in artistic spaces, finding inspiration and navigating pressure. Courtesy Deb Pickman

Rose cites colonialism and queer embodiment — sometimes journalistic, sometimes personal — as the core themes of her work. Blending surrealist imagery with notes on accountability and healing, her illustrations offer a different approach to white supremacy, misogyny and the many other harmful systems that have suppressed Queer and Trans experiences. Rose’s most recent release is Our Work is Everywhere, a graphic novel discussing Queer and Trans histories of resistance. “I wanted to look to myself and other people in my networks as the subject of my work,” Rose said. “Coming into my queerness, people in my community were essentially peer mentors. Having hard conversations about racism and sexism and accountability and power was super powerful.”

“Anyone doing shrooms this summer?” Lorica chided with a pre-pandemic crowd at Yuk Yuk’s Comedy Club in Vancouver. Their comedy is best described as someone who’s about to give bad news; their punchlines hit like sentences without punctuation. Their candid and conversational delivery demystifies the comic as a kind of ‘entertainer’ and brings them closer to real life. Their poetry, however, takes this candour to show something different. “Soft Armour,” a collection of poems from pre-pandemic moments of Lorica’s life, focuses on opening and softening the heart, especially when that heart might be too closed to accept love. To Lorica, comedy and poetry are good foils for each other. “There’s a difference between poetry and comedy; with poetry, you can hide on a page, with comedy, you’re expressing your identity in a comic space — you can let loose and be irreverent.”

Both artists touched on the topic of ‘gatekeeping’ in artistic spaces, finding inspiration and navigating pressure. It can be difficult to demystify the process between finding ideas and acting on them. Queer people especially can struggle to find these venues. As Rose puts it, “representation is truncated and tokenized in mainstream media.” Authentic and nuanced takes are hard to come by, with most narratives focusing on themes of violence and ‘coming out,’and as a result, the media fails to see Queer and Trans people as whole people. “But there are ways to challenge that,” Lorica said. “If I had stayed within a certain kind of audience, a safe one, I knew that this wouldn’t let me grow as a comedian and writer.” As they expanded and performed more shows in the ‘mainstream circuit,’ they witnessed new avenues being built. “Mainstream audiences can be very perceptive. Nowadays, more and more people want to hear different points of view.”

But a thread of dominance can exist even within Queer spaces. Between differing experiences and varying sets of privilege, “Queer communities can be super messy,” Rose said “There was lots of learning, even within my friend group, in the process of writing this. I wanted to document my experiences and uplift these intimate, personal moments.” Rose’s work enables her to start conversations on thoughtfulness, self-forgiveness and self-consciousness. “There’s this internal shame that comes with being an artist, especially as a Queer person,” Rose said. “Isn’t art supposed to be cathartic?”

Truly, art plays a significant role in allowing Queer people to find their role in revolution. As creators like Rose and Lorica balance vulnerability, struggle and the daunting task of reframing public perceptions on queerness, they take a stand, building communities and holding space for the unheard.