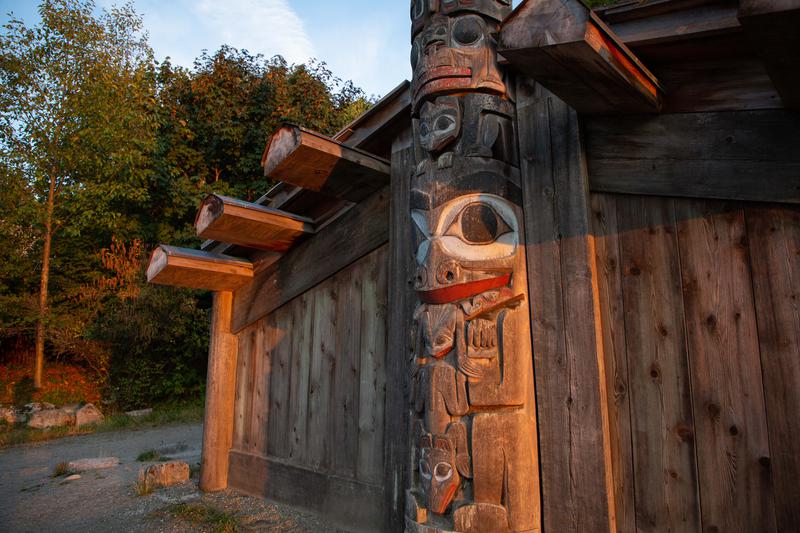 Once inside the Haida House, I was met by host Anjalica Solomon. Isabella Falsetti

If there’s one thing I love more than poetry, it’s challenging definitions of what the heteronormative, neurotypical and ableist world defines as “love.” So when I heard about UBC Arts & Culture and UBC Slam Poetry’s event, QUEER Coded: Slam + Spoken Word, which was hosted at the Museum of Anthropology’s cosy Haida House, I knew I had to attend.

Not many know where the Haida House is located because it’s nestled far behind the museum, although it’s traditional Haida-Gwaii architecture makes it easy to find once you know where to look. I followed the breadcrumb-like candles that lit up the way from the museum to the venue, already feeling like I was being teleported to some kind of wonderland. And I hadn’t even heard the poets yet!

Once inside the Haida House, I was met by host Anjalica Solomon, whose incredibly warm smile is probably one of the many reasons the event was sold out. They informed me that they were hoping to have an open mic at the end of the night after the four featured artists, which was even more exciting news.

In the warmth of the venue, with fairy lights strung across the wall as a backdrop for the poets on the stage, it was easy to forget about the rainy weather outside. All that mattered was the hubbub of human humming and the poetry I could almost hear swimming through everyone’s minds.

Solomon began the night by welcoming us with dim lights and an original music composition about queerness and their self-discovery. But just before they called upon the first performer, they summoned us for heartfelt cheer of “when I say sexy, you say queer” which set the tone for the evening.

Chantel/Shane, the first performer, stepped on stage with their guitar and a curious little device called a “loop pedal.” Having co-written a play with Solomon that was recently performed at the Nanaimo Fringe, they were all confidence as they took the stage from the host. As a self-proclaimed “mushroom mover” they told us how they connect their exploration of queerness with the science of fungi. Fascinating stuff for poetry, really.

They delivered four poems performed to background music that made you feel like you were driving past the beach in the summer, just chilling. Their fast-paced slam delivery — a meditation on misidentification and identity — was contrasted by the beachy music, and before long, everyone’s slowly starting to tap along. And snap, because it's a slam, of course.

The second poet was perhaps the one I identified with the most because she reminded me so much of me: a brown woman of colour living in a culture dominated by whiteness. Namitha Rathinappillai vocalized in her slam the clash of her queer identity with her brownness, all with a tinge of nostalgia for mangoes from Mumbai (my favourite poem of the night). She is the former director of Ottawa’s Urban Legends Poetry Collective and I feel extremely lucky to see her on campus that night.

Tawahum Bige, a Dene and Plains Cree poet, was the third headliner for the event. Commenting on everything from the trans-Canada pipeline to neo-colonial systems of power that oppress Indigenous peoples, Bige’s powerful hip-hop inspired slam was everything one could hope to see at an event like this. Bige’s arrest a few years ago for their land back work against the pipeline was definitely a powerful context in which to situate their poetry. As they said about their poetry, “it’s weird, you’ll like it,” and I couldn’t agree more.

Dae Shields, a.k.a. ebonEmpress, and their partner-in-poem JD brought out a piano and drums to close the night. Shield’s voice felt like vanilla against the soft piano notes as she recited wonderful verse about Black identity and its place in white society. Her last poem, which was perhaps my favourite piece from her, was about being “submerged in white,” which was a powerful note to leave us with. As she later told us, her collective AfroVanCollect aims to spread awareness about the African diasporic experience and its impact on cultures around the world. As a lover of both the piano and Afrobeats, I adored her set.

After the open mic which wrapped things up for the night, I left the Haida house feeling more energized and empowered. The night’s poetry glided through my mind on the candle-lit walk back home, and it was definitely an evening to remember.