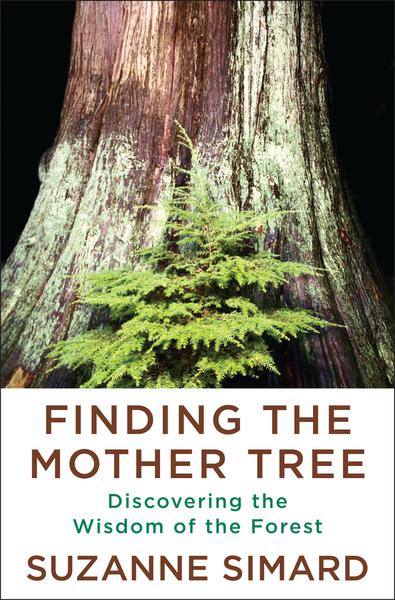 Let me pitch you a science fiction story idea: A young government scientist, working for a government forestry department, discovers evidence that trees are intelligent and self-aware beings. Her work grabs the attention of the public and media, but is ridiculed by fellow scientists and the forestry industry. As years go by, more and more studies come out that support her findings. Suddenly society as a whole is forced to grapple with the idea that plants might just be conscious beings.

If this sounds like it would be a fun read, it’s because it is. This is a story arc in Richard Powers' Pulitzer Prize winning novel, The Overstory. Powers based this book on the true story of UBC’s Dr. Suzanne Simard, who recounts her firsthand experiences in her new part biography/part popular science book, Finding the Mother Tree.

Simard’s story is fascinating. As a young scientist working for the British Columbia provincial government in the 90s, she discovered that different species of trees collaborate and support each other by sharing resources underground. Her discovery doesn’t seem as revolutionary in hindsight, since it’s now commonly accepted that forests are places of competition and mass collaboration. At the time though, Simard’s findings threatened the entire foundation of the lumber industry – an industry built on clear cutting, pesticides and monocultures. Simard’s research showed why these were all terrible ideas. She showed that trees grow best when they grow like natural forests.

Radically and publicly challenging the dogma of any massive money-making industry is a hard thing to do. It’s even harder when you are a precariously employed scientist working for a government department whose sole purpose is to support that industry. Add being a young woman on top of that in a male-dominated industry and you get a whole lot of barriers to break.

Simard’s book is a searing indictment of sexism, dogma and corporate interests in science. She shares her encounters with sexism that range from more subtle incidents – like being openly ignored at conferences and being constantly talked over – to incredibly aggressive ones – like being belittled, insulted and yelled at by male coworkers during one of the most important presentations of her life, in front of their bosses who did nothing about it.

Her experiences as she tried to change governmental science policy are also depressing. On the one hand, it’s comforting to hear stories like hers where governments who employ scientists and allow them to freely pursue research that could be contrary to corporate interests. But on the other hand, it’s disheartening to see how little consideration was given to her findings. Regardless, it is important to note how much more freedom she had back then, considering how little agency government scientists have now.

Simard left her government position to become an academic when, and partly because of, prime minister Stephen Harper’s censorship on government scientists sharing their findings. Harper required all research be approved before being published or shared. Trudeau’s government has only been slightly better. Scientists can share without approval, but getting manager approval is “strongly recommended.” Hint-hint, wink-wink. Nice job you have there, be a shame if something were to happen to it.

Of course, the most fascinating part of Finding the Mother Tree is when Simard starts arguing that trees are people.

Simard has, for a few years now, been one of the biggest behind-the-scenes voices in the Plant Intelligence Movement; Finding the Mother Tree will likely thrust her to the forefront. This idea – that plants are just as worthy, just as important, as humans are – might sound a bit ridiculous. Even I don’t think I’m sold on it just yet, but Simard makes a very convincing case.

Simard takes you through the science as she recounts more and more about just how complex trees are. For example, she walks you through the evidence that trees recognize their “children” growing around them. They will “raise” them by providing food and information. This is where the title of her book comes in; her use of the ‘Mother Tree’ is the perfect way to summarize the feminist and humanizing nature of her work.

The main argument for plant intelligence/consciousness basically goes like this: Over the past few decades we have made incredible discovery after incredible discovery showing that plants are incredibly more complex than we give them credit for. However, when we try to talk about this intelligence/consciousness in regards to this complexity, it's almost a useless endeavour. We are always defining these terms in relation to humans. It is ridiculous to expect plants, who have completely different lifestyles to us, to be intelligent or conscious in the same way we are.

For example, plants can only move by growing; they can’t move freely in space like we do. Imagine if you could only talk by waiting for your mouth to grow into the shape that sound requires! A favourite thought experiment from plant intelligence supporters is that we should think of plants as an alien intelligence. They suggest that we think of plants as something so foreign, so strange, that we can’t understand it and we can’t communicate with it – but that doesn’t mean it isn’t fully aware. It doesn’t mean it isn’t thinking the same things about us.

Despite this, one of the main critiques of the Plant Intelligence Movement is the accusation that they anthropomorphize (give human characteristics to something that does not have human characteristics) to try and trick people into supporting their position. This was a common response by botanists to the German forester, Peter Wohlleben and his book, The Hidden Life of Trees. Wohlleben’s book relies heavily on Simard’s research and she has even written an afterword for some of its editions. He argues that trees are intelligent, conscious beings who turn a forest into a society and live similar to how we live in our society.

Simard fully embraces anthropomorphism in her book as well, talking about trees as mothers and children. So, wait. What’s going on here? Why are Plant Intelligence Movement supporters both humanizing plants and arguing that we can’t humanize them? Well, how else are you going to talk about it? Simard and Wohlleben aren’t anthropomorphizing to mislead people, they are doing it because there is no other way to use a human language to talk about these concepts that we define in human terms. This problem is actually nicely explored in the science fiction movie, Arrival, where Amy Adams plays a linguist trying to communicate with aliens. It seems fitting that Adams will soon play Simard in the upcoming movie adaptation of her book.

Another counter argument to the Plant Intelligence Movement, is that complexity does not equal intelligence or consciousness. Plants don’t have anything like a brain, and that is the only place something like consciousness exists. I must admit, I don’t know how good this argument is. It’s the same debate we are currently having about Artificial Intelligence. Firstly, I think there is still a human-bias here. If we start our approach by requiring that intelligence must be exactly the same as human intelligence, then of course we won’t find any intelligence outside humanity. Secondly, just because our intelligence comes from our brains, doesn’t mean only brains can produce intelligence. Lastly, as Simard argues, if you look at the giant web of signals being passed between tree roots, it’s hard not to look at it and see something extremely similar to how neurons function in our brain.

The question now becomes: what would it take for us to realize plants are intelligent? What proof would convince us? There’s a point in Simard’s book where she expresses wonder about how she just keeps finding, despite increasing rigorous scientific controls, results that align with her theory of Plant Intelligence. She starts wondering why nobody else was looking at this stuff. Why no one was researching this stuff before her.

Of course, as Simard goes on to realize, people were researching it before. They just weren’t doing it through the lens of modern-day Western science. Generalizing North American Indigenous people’s beliefs can be problematic. They aren’t one culture; they are many. However, one undeniably common thread in a lot of these cultures is the belief that plants and animals are beings who are just as important, and as intelligent, as we are. Every living thing is a person. Simard writes about how funny, yet satisfying, it is to see her research come full circle like this. To have her research on the forests of Canada come back to the origins of this land. It’s obvious, really, she says.

Simard is a great storyteller and easy-to-understand science writer. Whether you read this book for the Plant Intelligence arguments, the struggle against the patriarchy of science or – unmentioned in this review – an incredibly enjoyable introduction to forest ecology and field experiments, you will not be disappointed.

This is one of those books that people will read and then change their life because of it.