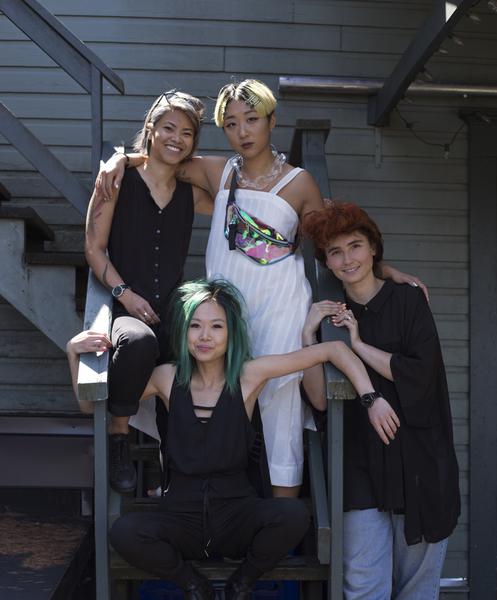 The mentors all work in varying disciplines, who through their art impart activism. Jamie Lou

The third-annual CURRENT: Feminist Electronic Art Symposium strives to create spaces for women, non-binary folks, and BIPOC to get involved with Vancouver’s electronic art and music communities. This year the symposium is trying a new mentorship program.

Nancy Lee, UBC alum and organizer for CURRENT, spoke about the new mentorship program this year.

“We felt that as producers over the last few years that we’ve developed a community and protocol to make these events happen,” said Lee. “So we thought that it was time for us to share our knowledge and resources now that we’ve done three editions successfully.”

Lee, interestingly enough, got her undergraduate degree in global resources at UBC.

“My background was actually in global health and health policy,” said Lee. “Through that, I got into documentary filmmaking, as a form of advocacy journalism and that's how I actually got into music video directing and music and art that I do now. The policy side surprisingly came really handy when I started to write grants because I understood how bureaucracies work.”

Electronic art is an umbrella term referring to digitally-made music, video, and art and its intersections. The mentors all work in varying disciplines, who through their art impart activism.

Participants collaborated with CURRENT’s team in a three-day program where they went over grant writing, curatorial vision development, dialogue facilitation, community building, project planning, budgeting, networking, and multi-day event programming. All of the mentees were paid a one-thousand dollar stipend for their time. The event ran from July 23 to 25.

There are many financial risks that cultural producers take for putting on events, as Lee illustrated.

“If you want to be an event producer, here’s a thousand dollars, light it on fire,” she joked.

Not only that, but Jen Sunghine, who is also a UBC alumna and recently joined CURRENT’s team this year, said that the work itself can be both emotionally exhausting and isolating. She offered some advice for aspiring cultural producers.

“You don't always have to pander and cater to whiteness, but you also have to be presentable in such a way and that is to say that you also have to know how to ‘speak the oppressor's language’ to quote Adrian Rich,” said Sungshine. “A lot of this is teetering in this kind of balance of, 'look we gotta be able to write in the funder's language and also make connections and build relationships’, that's a big thing, but I wish someone had said to me that you don't always have to be that submissive Asian girl who only speaks up when white people want you to speak up, when it fits their interests.”

Sungshine went to UBC for women’s studies in 2009, and has been a community mentor in Vancouver’s queer and feminist scenes for the past fifteen years.

“What I’ve landed on is that I’m in the queer community, but I’m also part of the techno-electronic arts community and dance community,” she said. “How do we bring those, often seemingly contradictory communities together? That kind of tension is where I truly thrive in. It’s kind of weird but that’s where the art is most potent. So I love that search and that seeking."

"For me, this mentorship is quite near and dear to my heart because I didn’t grow up with this, and I think that if I had this in my early 20s, then I would have had a much easier time in terms of the insecurities and the self-doubt and imposter syndrome. That’s not to say that we will be holding anyone’s hands, we’re being very realistic about the fate of the world and fate of event producing.”