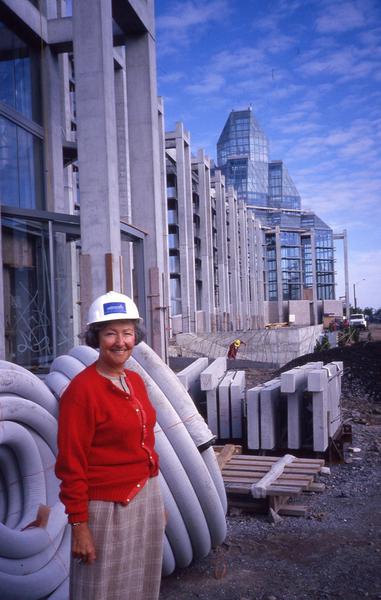 The documentary tells the story of four prolific women architects in Canada as they reflect on their careers within the context of the male-dominated industry. Photo Courtesy of DOXA

City Dreamers, Joseph Hillel’s newest film, arrived at Vancouver’s DOXA Documentary Film Festival. The documentary tells the story of four prolific women architects in Canada as they reflect on their careers within the context of the male-dominated industry. The architects profiled included the notable Denise Scott Brown, Blanche Lemco van Ginkel, Phyllis Lambert and Cornelia Hahn Oberlander. The film gathered a warm reception, selling out days before the showing. For good reason too: Hillel’s twinkling, The Royal Tenenbaums-esque documentary is hilarious, warm and pointed, and acts as an excellent blueprint of their pursuit through adversity.

Of the four architects profiled, one story in particular fell close to home for UBC. Oberlander served as the landscape architect for UBC’s often admired Museum of Anthropology building alongside Arthur Erickson, and completed work on many other popular Vancouver locales, such as the Robson Square Law Court’s urban park. Oberlander’s story is remarkable: as a young child, her father passed away in an avalanche, and her mother single-handedly escaped Nazi Germany with Oberlander and her siblings in tow. After arriving in England and later emigrating to Canada, Oberlander gained her BA from Smith College in 1944. In 1947, she was among one of the first woman to graduate from Harvard with a degree in landscape architecture.

As Oberlander recounts her career from her glass-walled Point Grey home studio, her emphasis on the necessity of greenery in urban areas marks a defining feature of her work. Here in Vancouver, we are lucky to enjoy urban parks and access to nature, to which Oberlander has been central in establishing.

Viewers can expect to see broad skylines, graphics and stunning vintage photographs scattered amongst each woman’s story, illustrating the change affected by development on each architect’s respective city. The film is sprinkled with jazz music and quick, neat transitions giving it an air of regality and poise. The film is both aesthetically pleasing and full of joy. Certainly it was a fun watch.

Despite growing up in a different era to our own, each of the architect’s stories are progressive and forward thinking even by today’s standards, promoting sustainability, greenery and affordable housing. Each of the women has become outstanding in their respective fields, with illustrious and rich careers to review.

After watching, I felt a strange mixture of being both humbled and inspired. Each of the architects profiled had to fight tooth and nail to be taken seriously in their field amongst swathes of opposition claiming that there simply wasn’t room for women in the business. To make a career of architecture in the mid 20th century as a woman was an almost impossible prospect, and the lengths of what they achieved was nothing short of inspiring. Architecture remains a field dominated by rich white men, and is an example of a saturated industry where breaking into the ranks even if you fall inside the prerequisites is tough. The feats the architects achieved is nothing short of remarkable, and a reminder of the boundaries still yet to break in the future.

This article previously attributed the title of the documentary to be 'City of Dreamers'. It has been updated to correct the film's title. The Ubyssey regrets this error.