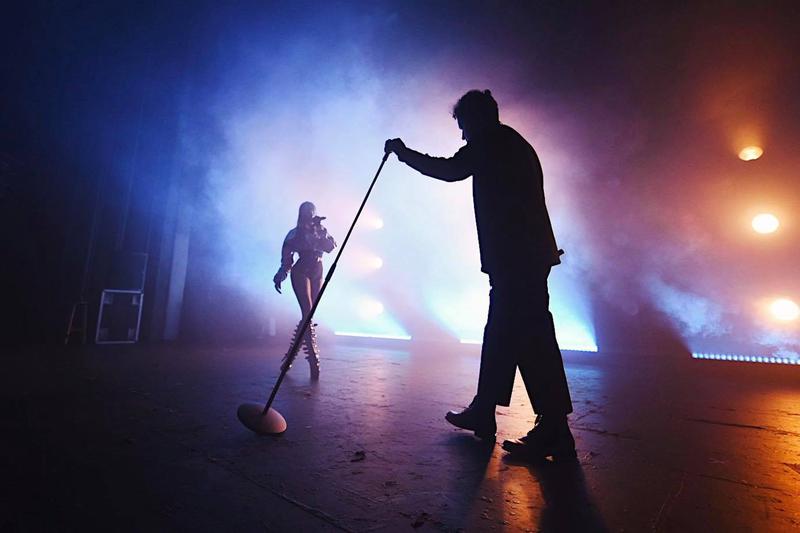 The nearly sold out September 14 show brought together an audience of die-hard fans both sporting the Los-Angeles based R&B collective’s merchandise. Courtesy Brandon Artis

Whether stuck in the ‘honeymoon’ phase or searching for a night out to spice up their love lives, the couples in the crowd of the Emotion Oranges show at Westward Music Festival arrived at The Vogue Theatre anticipating an evening of sultry tunes and sexy vibes.

The nearly sold out September 14 show brought together an audience of die-hard fans both sporting the Los-Angeles based R&B collective’s merchandise and decked out in orange tube-tops and wigs. But the couples — oh, the couples… oh, the many, many couples — defined the generally accepted expectations for the evening: a live performance of part nu-disco, part electronic-pop, mood-setting bedroom music — high expectations that were fully met by the genre-bending duo and their opener, Chiiild.

Little is known about either mysterious duo but the fact that they share a record label, Avant Garden. This may explain the similarities in Chiiild and Emotional Oranges’ approaches to the simply-labeled R&B music they produce.

With melodies, rhythms, instruments and other futuristic sounds not commonly associated with R&B (the show included a live violin and a tambourine… an R&B performance, with a live, well-played, central tambourine percussion-line and violin string accompaniment, wow), Chiiild redefined R&B music within their short, seven-song set. Chiiild’s performance was not only the first of their tour with label-mates Emotional Oranges, nor was it simply their first time in Vancouver, but this marked Chiiild’s first live performance ever. Dancing bodies quickly filled the dance floor, so much so that one person frantically waved an umbrella in the air to signal to distant friends in the crowd. Chiiild remained hidden behind flashing lights and thick smoke, partaking in little communication with the audience as their songs flawlessly merged from one D’Angelo/Maxwell-inspired piece — complete with sexy guitar licks — to the next electronic, neo-soul slinky ballad.

Although also previously virgins to Vancouver, Emotional Oranges were greeted with animated excitement. High-pitched cheers flew through the audience as the throbbing bassline of “Unless You’re Drowning” filled the room at the start of the show. The enigmatic duo, who both refrain from publicly revealing their identities, maintained a seductive chemistry, enhancing back-and-forth conversational vocals. The group’s 90s R&B-inspired slow jams with funky grooves and psychedelic electronics closely mirrored the work of artists such as Drake, The Weeknd and Sade, while establishing an innovative and original sound. At many times, the backing music paused to showcase exposed vocals from both members and although, like their openers, the duo remained concealed in a haze of theatrical smoke and vibrant orange and red lights, Emotional Oranges managed to keep the crowd’s energy high, engaging in nostalgic call-and-response chants of “when I say ‘hey’, you say ‘ho,’” an obvious nod at their 90s and early 2000s influences.

Emotional Oranges pulled a fan on-stage to dance along to their penultimate song “Corners of My Mind” and asked the question central to their tour, performance and musical career: “Can we cry a little together?”

Emotional Oranges say that “Your Best Friend is a Hater”, a single off their second album, The Juice: Vol 2, will be released on September 27, with the album itself dropping on November 18.