Together, SASC and Hatch Celebrate Community and Healing 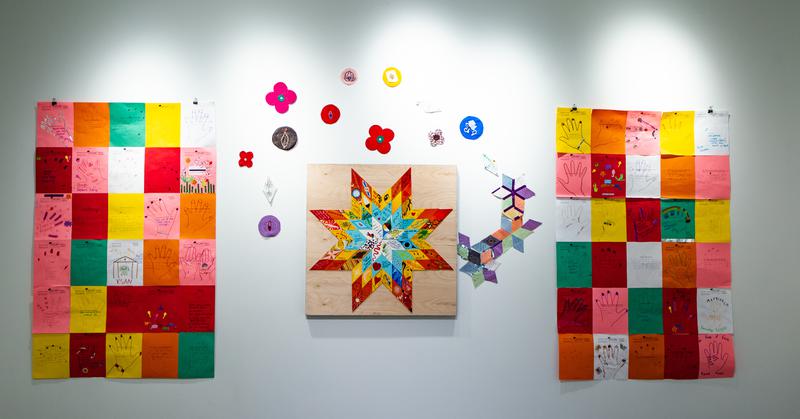 “Raised Hands” and “Wish Upon a Star Blanket Mural” at the exhibit. Elizabeth Wang

You’ve seen them: the signs.

Ten of them, huge, cardboard and Styrofoam, most rounded into tombstone shapes, some simple rectangles or crosses. “COPS ROBBED MY ‘GOOD’ DEALER,” reads one; “STOP COLONIZATION,” another. At first glance, they’re an odd thing to see on the wall of an art gallery. What are they, protest signs?

The signs — a piece called “WUNISKA,” meaning “arise” — are just one part of the Hatch Gallery’s latest exhibition, Together: Communities of Healing. The exhibition was made in collaboration with the Sexual Assault Support Centre (SASC). Together is the second collaboration between the Hatch and the SASC, following last March’s Healing Fires.

Together focuses on the different ways that people heal after sexual assault or other traumas and how community support can facilitate that healing. There are 18 pieces of work in Together, varying from audio poems to embroidered calendars to black and white photographs. Some of the artists have chosen to remain anonymous for this gallery showing, while others have not.

Now let’s talk about the signs.

“WUNISKA” is a collection of protest signs from a September 12 die-in at Vancouver City Hall, meant to emphasize how many Indigenous women have been affected by the opioid crisis. It is one of four pieces in Together that were previously exhibited at the SUM Gallery last December, as part of a show called Daxgyet Hanak: Strong Woman, which was brought together by Shane Sable.

Daxgyet Hanak was presented by We Have a Voice: Indigenous Women Who Do Sex Work Speak Out, which is in turn a project by Sex Workers United Against Violence. From the exhibit’s pamphlet, the two-year Voice project has been providing opportunities for Indigenous women who do sex work on the Downtown Eastside to “speak to their experiences in a safe and healing way.”

“WUNISKA” and the other works from Daxgyet Hanak not only directly translate community healing into direct action, but also forefront community voices, down to the very structure of the art itself.

“Raised Hands” looks rather unassuming at first glance. Sheets of brightly coloured paper hanging next to each other in a giant square, each printed with a drawing of a hand and a prompt. Prompts vary from: “The way I got into sex work was…” to “More police in the community would mean…” or “Things that attracted me to sex work were…”

However, it’s not always easy to read the prompts. Stickers, doodles and plain writing cover each sheet of paper. What might seem messy is actually the point — above considerations of legal entities or police come the voices of those in the community. Whatever they want to say or if they want to speak at all. Explanations or acknowledgements or arguments — only so much as community members want to provide. Decide to provide.

The true strength of Together: Communities of Healing is the community space it provides, here in the Nest, explicitly for discussions of healing from sexual assault and other traumas through art and community.

I might be off the mark here, but it feels rare to have an exhibition that centers healing from trauma while still providing artists and community members the space to share as much or as little as they want about their traumas. Sometimes it’s not about what we as voyeurs want explained or justified from the artist, but what the artist as a person and a member of our community wants to share.

As I wandered the gallery, I found myself taken by a specific painting. “Acts of Therapy: I Document my Dismissal and my Organism Thrives,” by Stephanie Talic. It’s a big square canvas, paint or ink on top of layered vertical strips of collage. What I’ve nicknamed it in my head this past weekend is “Twine” because it looks like twine — thin, tangled lines coalescing or unraveling diagonally across the canvas.

Logically, I know why this painting stuck out to me so much. We love paintings and lines and weird abstract lines that seem sharp or sinuous or full of action. We, meaning me specifically. Can’t get enough of that shit.

But for that first moment seeing that painting, I wasn’t thinking about capital-A Art or what aesthetics I like. I looked at it and something in my marrow went, ‘Oh, me,’ with the same gentle surprise of seeing your reflection when you hadn’t been expecting it.

Together: Communities of Healing will be at the Hatch until March 12.