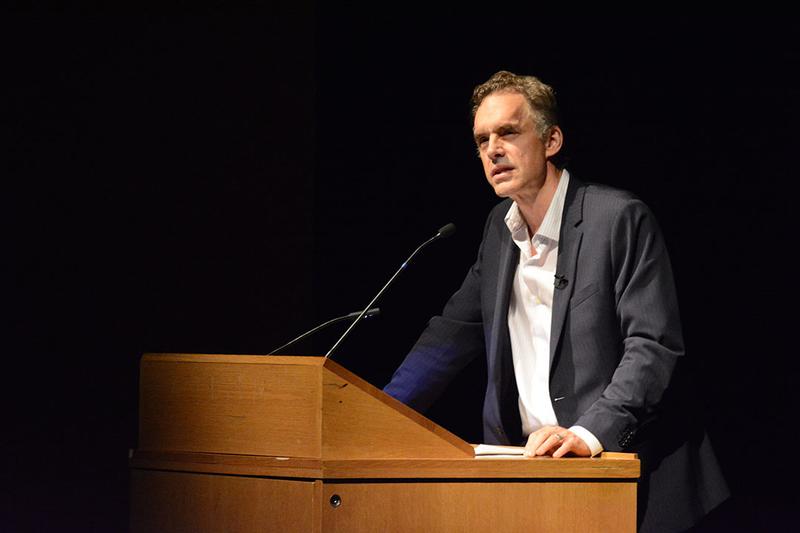 “Good to see you, man,” said a slight young man in a too-big dress shirt and tie. He was beaming. “You’re a normie, but I respect you.”

He spoke to his friend who had chosen a seat toward the back of the Chan Centre’s Telus Theatre to hear Dr. Jordan Peterson speak.

“What?” his friend said.

“This is the normie section.”

The young man in the tie walked back to his seat in the front row, a smile still glued to his face.

Tonight was going to be great.

Peterson, the University of Toronto psychology professor who has turned an online lecture series into a goldmine that nets him at least $800,000 a year, came to UBC Friday night to talk about the perils of postmodernism and “neo-Marxism” — the ideologies that, he puts forth, have turned our universities into “walking corpses” and our children into despot-worshipping sociopaths.

Now, he says, it’s coming for the rest of us.

Peterson rose to prominence protesting bill C-16, which gives gender expression and identity protection under the Canadian Human Rights Act and Criminal Code. More specifically, it’s now illegal to deny services, employment, accommodation, etc. to individuals based on their gender identity, or to promote genocide against them.

Peterson believes that this will result in “compelled speech” — that if a person refuses to use someone else’s preferred gender pronouns, they’ll be charged with a hate crime.

The panic is misplaced, according to the Canadian Bar Association and most other legal experts. But Peterson’s refusal to give up the fight has only endeared him further to the right, including UBC’s own Free Speech Club, which organized the event.

Peterson began his talk by defining postmodernism as a “very dark view” — a “Hobbesian nightmare” where everyone is at everyone else’s throat. This is the ideology of the people who are teaching our children and dictating what we should think, Peterson said.

And they’re not misguided — they’re evil. Their morals are bad and their hearts are in the wrong place.

Peterson's work for the New Democratic Party (NDP) when he was younger illuminated this for him. He thought the leaders were honourable people, but he didn’t like the low-level activists — they seemed “peevish and resentful.”

Instead, he found himself enjoying the company of the Alberta capital-C Conservatives on his school’s board of directors.

Young Peterson was conflicted. Why had he come to respect those who he ideologically disagreed with, when he struggled to do the same for his NDP colleagues?

But then it clicked:

“They don’t like the poor, they just hate the rich.”

The radical left ruins everything

Peterson’s easy demonization of the “radical left” is familiar to anyone who has watched his clips on YouTube. The talk was a selection of crowd favourites, down to the ethical basis for play in rats and 350-million-year-old dominance hierarchies.

It’s Peterson’s reverence for natural hierarchies — a “stable solution” to the chaos of society — that is so appealing to fanbase of young men who feed on the idea that white males are unfairly portrayed as the root of all evil, and who feel personally attacked by feminism.

In the West, Peterson said, hierarchies are based on competence — not power or privilege. If a hierarchy becomes too corrupted, it crumbles. We can see this because “everything around us works all the time.”

For instance, Peterson cited Harvey Weinstein as evidence of the hierarchical system running smoothly. He worked hard, achieved a position of power, started to act like a “tyrant” and was removed from his position of power.

“That's the definition of a functioning state,” Peterson said.

He skipped over the multiple accounts that Weinstein had serially abused women for decades, employing underlings to run interference, planting scandalous stories in the press on those who refused his advances and ruining the reputations and careers of those who displeased him. He was caught out because a tiny fraction of his victims were convinced by the media to speak publicly about something that “everybody fucking knew.”

But his dismissal of uncomfortable bits of Western society doesn’t bother those who paid to see him. They came for the greatest hits, and Peterson delivered.

He speaks with the passion and conviction of a preacher, and the authority of a tenured professor who has it all figured out. His hands literally draw out his thoughts in real time as he places ideas on front of him and then ties them all together. It’s just as easy to picture Peterson on a mount as a stage, and it’s difficult not to become enraptured.

It’s this zeal, combined with a black-and-white, good-and-evil stance against leftism and preference for Western civilization’s status quo, that appeals to such a broad swath of the self-identified right and centre — classical liberals, neoconservative reactionaries, the alt-right, the anti-politically correct and, yes, some Nazis all love Peterson.

He is revered by the anti-“social justice warrior” crowd because he’s able to perfectly encapsulate what they’ve been feeling so viscerally in the language of academia, while simultaneously discrediting the rest of academia.

You don’t have to engage with postmodernists, socialists or Marxists because they are wrong, Peterson tells his followers.

“Postmodernists don’t believe in facts,” he said. They are motivated by hatred, not compassion, and they see truth as an obstacle to overcome before implementing their sick agenda.

Peterson’s teachings excuse his followers not only from the burden of argument, but from reflection — for instance, on the societal structures that put white men at the top of nearly every systemic hierarchy.

Structural racism is brushed aside — people prefer “the familiar to the novel”; disparate hiring rates for men and women come down to biology; and any oppression you might feel should be outweighed by thankfulness that you live in a wealthy nation.

“Postmodernists have zero, zero, zero gratitude,” Peterson said. “It’s all, ‘Oh my god, I’m oppressed.’ Of course you’re oppressed, but you’re not oppressed by the patriarchy, my god.”

Peterson finishes his lectures with a bow on top, in case you had any doubts: “and that’s that.”

Toward the end of the night, Peterson announced that he’d like to talk about white privilege, which elicited a “yesss” from a solid portion of the crowd. Some applauded. There was a woo.

The thing about white privilege, Peterson said, is that it doesn’t exist. Well, it does, but there are many types of privilege — the privilege of being young, old, male, female, black, white — and who’s to say which ones are more important than others?

There’s no evidence that being a man grants you more privileges than being a woman, he said.

(In North America, women only live about four years longer. They're also far more likely to be paid less, married off as children, and raped.)

Further, it’s racist to point out white privilege because racism, as Peterson sees it, is painting one racial group with the same brush.

“That’s what racism is — there’s no other way of defining it!” he said.

Peterson didn’t engage with the definition of racism as a set of systemic and institutional functions which promote the continued dominance of a particular race, that being the one most academics agree on.

This is Peterson’s favourite rhetorical play. Once you define the “other” as evil, bloodthirsty tyrants, you leave no room for any definitions they propose — anything your opponent says becomes an extension of Pol Pot’s ideology, and we all know how that turned out, don’t we?

It paints your opponents into a corner: they can accept the wisdom you are willing to dispense, or they can live a savage life, untethered by morality.

It makes you a hero, and it makes them easy to dismiss.

On the bus ride home, I overheard a young man speaking to his partner with increasing agitation about the “leftists” on campus.

He echoed Peterson’s assertion that neo-Marxists are actuated solely by contempt for the rich, not love for the working class.

They’re all the same, he said.

He squared up against an imagined foe.

"You’re against individuality,” he spat. “You’re against business owners employing people, which is the basis of Western civilization."

“I don’t want any young person to grow up to be a leftist. They’re degenerates to society.”