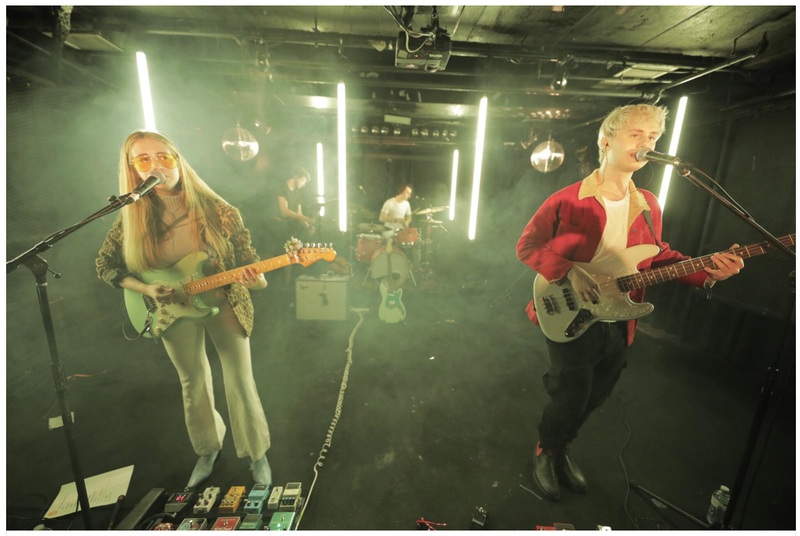 Vancouver-based funk, jazz and rock fusion trio, Ludic, played a headlining show at The Biltmore Cabaret on September 15 that brought this year’s Westward Festival to a groovy end. The band, consisting of Ayla Tesler-Mabe and brothers Rhett and Max Cunningham, performed pieces with classic soul vibes reminiscent of Stevie Wonder and Steely Dan.

Cheetah-print jackets, retro sunglasses and bell-bottom pants all made due appearances on-stage as Ludic performed an eleven-song set to an enthusiastic crowd. They endlessly showing off their instrumental talents while dancing through a light-show of psychedelic colours.

Tesler-Mabe, singer and guitarist for the band and also recognizable from the indie-rock group Calpurnia, made a heartfelt comment on the Westward Festival performance, humbly comparing it to one of her first live performances at the same location during a “David Bowie tribute night with high-school friends five years ago." Combining catchy contemporary pop-rock with jazzy doo-wop to produce a medley of play funk, Ludic has established a bright '70s sound with modern originality.

With their golf hats and dress shoes, the members of Casinos could initially pass for a group of substitute high-school teachers — but, of course, teachers cool enough to discuss late '90s pop-rock bands with their students. The four band members, however, additionally possess a level of coolness one may only acquire through masterfully belting out lyrics and melodies resembling a Blink-182/Bleachers/Barenaked Ladies crossover. Casinos filled The Biltmore Cabaret with their fiery rockstar energy, including iconic hair flips from the band’s lead vocalist and guitarist Kier Junos.

A smokey mishap from an upstairs hotel triggered wails from a fire alarm right as Club Sofa’s set was scheduled to begin at The Biltmore. After bartenders and security guards made multiple attempts to mute the obnoxiously loud ringing - at one point stuffing hand-towels within the vibrating bell of the alarm, Club Sofa finally took to the stage. Lead singer Payton Hansen sarcastically introduced each of their songs — “this one’s just about a boy, like the most of them” — before continuously charming the crowd with chillingly sweet vocals, Jasmine Carlin killed it with catchy bass lines while Dominique Hallberg and Jessica Jones showcased incredibly diverse instrumental variability as they seamlessly switched from summery pop to jazz-inspired grooves.