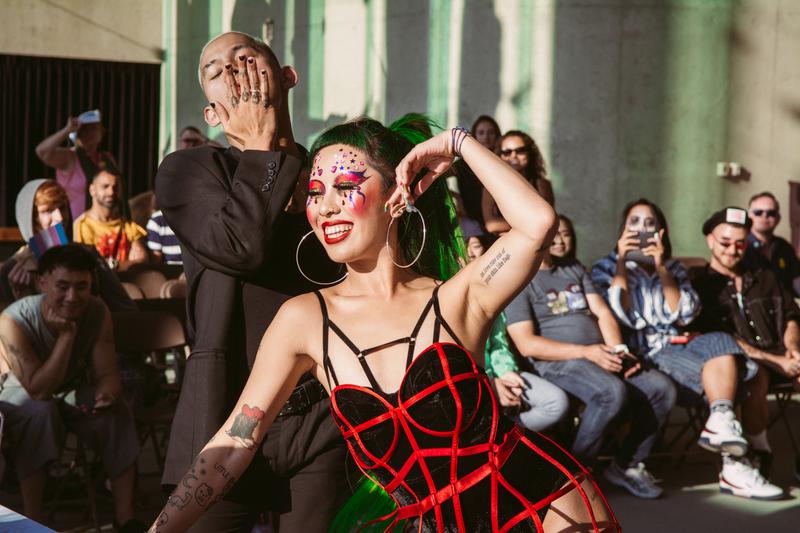 With just a touch of healthy competition, the commentator and performers spirit spread throughout the space and soon the large audience was clapping and cheering along with the performances. Xinyue Liu/Vandocument, courtesy Museum of Anthropology

Pride was not always the colourful, fun parade that we recognize today. In commemoration of the original spirit of Pride, The Museum of Anthropology’s (MOA) August 3 event Pride at MOA: From a Riot to a Revolution commemorated the 50th anniversary of the Stonewall Riots, and reminded us of the violence and resistance out of which the modern LGBTQIA2S+ rights movement was born.

From documentary screenings to fishbowl discussions to voguing lessons and performances, this event had it all.

The screenings and discussion were held in MOA’s Haida House. The room filled with visitors arriving to see the screening of Stonewall Forever, which is directed by Ro Haber. From the first scene — protestors marching in NYC with the voice of an activist moving the crowd to tears — to the last, the film’s moving interviews and visuals told the story of Stonewall in a way that highlighted the people of colour, trans people and homeless people who contributed greatly to the movement. The interviewees were activists who had been present at Stonewall as well as those who work today to continue the movement. The compelling visuals and clips were images and videos from the riots themselves and the gatherings that followed. The emotion contained in these images fit perfectly alongside the interviews and stories.

After an enthusiastic round of applause for Stonewall Forever and a brief introduction from Kimberly Wong and Jen Sungshine, the director of Yellow Peril: Queer Destiny, this next film was played. With stunning visuals of the drag artist Maiden China in her dazzling red ensemble standing alone on the beautiful coastline of BC, the film captivated the attention of the audience in the Haida House right away. The film goes on to explore her story and the idea of identity in a queer Chinese-Canadian context. This story brings the audience from Vancouver club scene drag performances to intimate family conversations in Langley, BC. As I found out in the discussion after the film, these themes were commonalities felt by many people in the room.

The discussion weaved its way through topics like the technical aspects of making the documentary — Sungshine expressed her excitement in using drones for the first and final shots, for example — to the universal questions surrounding identity and how these become important for the LGBTQIA2S+ community, specifically those who are also racialized. People began sharing their personal stories with these topics, leading to an intimate and productive conversation which left the visitors with a sense of community and understanding — a successful aspect of this event.

The grand finale of the event — the Voguing Ball — took place in MOA’s Great Hall. The audience was set up on either side of a runway on which the Vogue Van Jam performers enthralled the audience with their amazing talent. With just a touch of healthy competition, the commentator and performers spirit spread throughout the space and soon the large audience was clapping and cheering along with the performances. I was left in awe of this unmistakable energy that everyone in the large space seemed to share, to the beat of dance music, the flipping of hair and the flashing of costumes.

While the final cheers and standing ovation were flooding the Great Hall, the commentator reminded the audience that the origins of this art is the work of the marginalized Black and Latino youth of 1960s Harlem NYC. And with that recognition, MOA had achieved their goal of bringing visitors back to the roots of the LGBTQIA2S+ culture and rights movement.