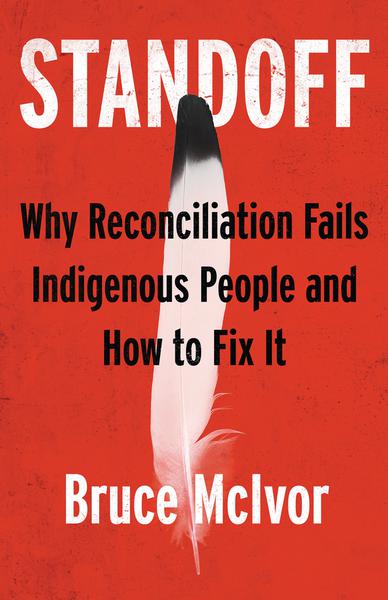 McIvor stressed that discomfort is an important part of reconciliation. Courtesy Harbour Publishing

According to Dr. Bruce McIvor, adjunct professor at the Allard School of Law and partner at First Peoples Law LLP, true reconciliation requires us to sit in our discomfort, actively listen to Indigenous communities and completely reevaluate everything we have been taught about the Canadian settler state.

As McIvor demonstrates in his upcoming book, Standoff: Why Reconciliation Fails Indigenous Peoples and How to Fix It, reconciliation is more than empty promises and land acknowledgments.

Standoff is a collection of essays that breaks down the Canadian colonial legal system, how it works to oppress Indigenous peoples and the social, political and historical forces that created it.

“I think what we need is a better understanding of the basis for Indigenous rights in Canada — the history [and] the law — [and its current limitations],” McIvor said in an interview with The Ubyssey. “[And] what needs to be done to move towards real constructive reconciliation with Indigenous peoples.”

McIvor advises readers to “be open to setting aside and questioning some of [their] assumed knowledge about the law” before engaging with this book.

“A lot of us are taught different things through school, and we have an idea of Canadian history and Canadian law that doesn't necessarily line up with the reality,” he said.

He also stressed that discomfort is an important part of reconciliation.

“Some of the essays in my book will make particularly non-Indigenous people feel uncomfortable,” he said. “That’s a good thing.”

As he states in his book, “recognition is the prerequisite for reconciliation.”

In order to understand what reconciliation is and why it is needed, readers are first introduced to the Doctrine of Discovery.

The Doctrine of Discovery is the basis of the Canadian legal system. It is the “racist, dehumanizing and indefensible [legal] principle” claiming that European countries owned the lands they “discovered” despite it being occupied for millennia by its Indigenous peoples. Moreover, it claims that by virtue of discovery, Europeans extinguished the sovereignty of Indigenous peoples.

This doctrine was justified by the concept of Terra Nullius — the idea that any land that is occupied by non-Christians is empty because non-Christians were not considered actual people.

Throughout his book, McIvor calls upon the Canadian federal government to “repudiate the Doctrine of Discovery.” This, he explains, is just one necessary step among the many required for true reconciliation.

One of the central ideas in this book is moving from consultation to consent-based decision-making.

The Canadian government is required to consult and accommodate Indigenous peoples when they consider making a decision that could potentially affect Indigenous rights protected under section 35 of the Constitution. This obligation is called the duty to consult.

“There’s this principle [called] the honour of the crown and it invades all of Aboriginal law and the law around Indigenous rights,” he said. “It goes to the core fact that Indigenous people were here with their own laws, exercising their laws on the land, long before non-Indigenous people arrived.”

It is because of this fact that the government has a “heightened responsibility to ensure that [Indigenous peoples’] best interests are protected.”

McIvor explained that a lot of non-Indigenous people in Canada struggle with this concept because they “don't understand that it's not a simple matter of equality.” The duty to consult, as he states in his book, “is a constitutional duty owed solely to Indigenous people” because they were here first.

This duty to consult is part of Canada’s fiduciary duty — a legal obligation in which one party must act in the best interests of another — to Indigenous peoples.

There is a set of minimum requirements necessary in order for a consultation to be meaningful. This includes having this consultation at the earliest stages of planning and doing so in good faith “with an honest intention of substantially addressing Indigenous peoples’ concerns.” Moreover, the government officials engaging in the consultation must have the power to change the course of the project to accommodate Indigenous people’s concerns, otherwise it is meaningless.

Throughout his book, McIvor discussed how environmental assessments represent a problematic means to fulfilling this duty and how the latter should consider the cumulative impacts of governmental and developmental projects on Indigenous rights.

He went on to say that the duty to consult is often met with “frustration and cynicism” among the Indigenous community. This is because of “their first-hand experience with endless talk and little action” in terms of implementing meaningful accommodations.

This is why he recommends moving towards a consent-based decision-making model. According to McIvor, consent has two main components: recognition and respect.

Consent requires “recognition and respect for the historical and legal fact that despite having undergone centuries of colonization and genocide, Indigenous peoples have never relinquished their right and responsibility to make decisions about their lands.”

It is important to note that consent is an international standard as outlined by the United Nations Declaration on the Rights of Indigenous Peoples (UNDRIP) which has been adopted into both international and Canadian law.

As McIvor emphasized, UNDRIP is about government accountability.

“[Indigenous] rights exist both as inherent rights and rights protected under section 35 of the constitution,” he wrote. “The point of the UNDRIP legislation is not to create Indigenous rights, but rather to hold the federal government to the international standards it has publicly endorsed.”

McIvor called upon the BC provincial government to seriously implement UNDRIP by applying it to existing projects that have already received provincial approval.

He also called upon the federal government to uphold their “historical and legal responsibilities to Indigenous peoples.” This includes resolving disputes between Indigenous communities and the provincial government.

The federal government is currently drafting legislation for UNDRIP.

How to be a good ally

Near the end of his book, McIvor explains how the efforts of some non-Indigenous allies — not the majority — can result in them speaking over the voices of Indigenous peoples.

During the interview, he explained some of the key components to good allyship, such as practicing active listening and listening more than you talk when engaging with Indigenous people.

“I think it's really important to be out there not taking the lead, of course, but be in a supportive role particularly when making it clear to Canadian politicians that … for true meaningful reconciliation, there needs to be concrete change.”

McIvor encourages allies to demand politicians to “show them the deliverables.” He urges allies to make it clear that “it's no longer acceptable to have this wide gap between rhetoric and reality.”

McIvor also explains the importance of being willing to question your existing worldviews.

As he wrote in his book, a critical part of reconciliation is understanding that “Canada is a fundamentally racist state.” That is the first step but it will make many people uncomfortable. But “with acceptance comes opportunity” for change.

Standoff as a resource

Standoff was written for non-lawyers in order to make this information and opportunity for questioning as accessible as possible.

McIvor is currently writing a second book which will be an “easy-to-read explainer for Indigenous rights.” This book will answer many of the frequent questions he receives about Indigenous rights and Aboriginal law in a way that will be accessible to readers without compromising accuracy.

This book is also a crucial resource for law students. He explained how accessible analyses of Indigenous Rights and Aboriginal law are not available to law students.

“[Law students] have to take the Aboriginal treaty rights requirement as part of constitutional law during first year, but the law is very complicated,” said McIvor. “If you're simply reading case law, it's hard to see … the historical and legal context and then, most importantly, it's hard for students to understand how this fits into a modern-day political reality.”

“As law students and lawyers, there's an obligation on us all … where possible, to engage with non-lawyers, whether it's family or friends [or] colleagues, to explain and answer some of those questions that the wider public are grappling with when they're trying to understand why Indigenous people are put in a position to struggle for recognition of their Indigenous rights.”