Nardwuar gets a star! 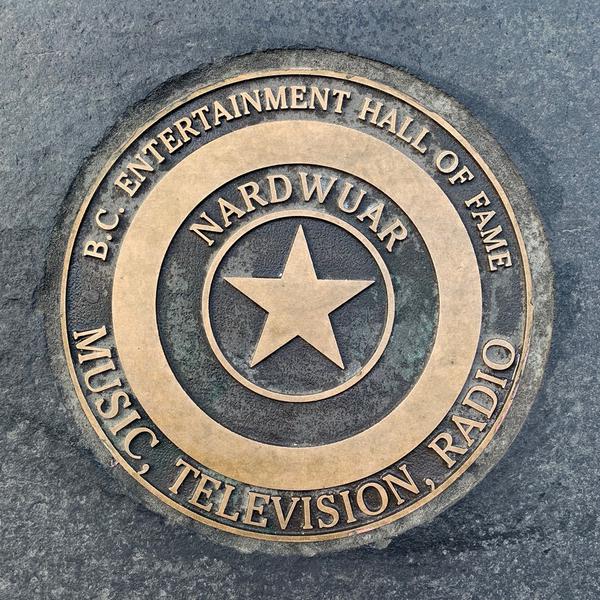 Another star was added to the constellation stretching down Granville street on September 29. Nardwuar the Human Serviette, born John Ruskin, was given his place in the British Columbia Hall of fame in a ceremony featuring videos of Future, Snoop Dogg and a surprise appearance by Vancouver mayor Kennedy Stewart.

Nardwuar’s star shines much brighter and further than British Columbia. Getting his start recording interviews in high school with members of the band Poisoned, he moved to CiTR when he started studying history at UBC. He became known for his incredible, deeply researched interviews and the amazing reactions he is able to get out of guests. Tyler the Creator asked him if he was “with the Feds.” Pharrell called his interview with Nardwuar. “one of the most impressive… of his life”. He’s chased Lil Uzi Vert. Twice. Lil B performed at Nardwuar’s 30th anniversary show last year.

The event, hosted at the legendary Commodore Ballroom, started out with an introduction by delegates from the BC Hall of Fame and legendary CBC host Grant Lawrence. After a slightly stuffy induction ceremony, Mayor Kennedy Stewart made a surprise appearance. He gave a speech and officially declared September 29, 2019 Nardwuar Day in Vancouver.

After Stewart’s introduction and proclamation, Nardwuar came out to tell his story holding a model of his star and gave an impassioned call to arms for the DIY-minded. The event was packed with the kind of music-obsessed 14 and 15 year olds that make up a sizeable chunk of Nardwuar’s fan base. He interspersed his speech with clips from his sizeable Video Vault and explaining how Future talking about cheesecake saved an interview, in the eyes of the internet.

The internet was where Nardwuar’s career truly exploded, with his unconventional interview style and trademark tam o’shanter hat becoming iconic. If you’ve never watched one of his interviews, it feels like a breath of fresh air after years of canned questions. His research is world-renowned, springing guests with questions about their fifth-grade teachers and giving them gifts from deep in their personal lives.

After his speech Nardwuar rocked an Evaporators show, his band perhaps best known for their okanagan anthem “Ogopogo Punk”

Nardwuar maintains that he had no idea that the mayor was going to be there.

“It was a total surprise,” Nardwuar told The Ubyssey in an interview a few days later. The Ubyssey talked to Nardwuar to ask him how it felt to finally become an official member of the BC Entertainment Hall of Fame.

He credits much of his early inspiration to seeing his mother on the Shaw Cable show Our Pioneers and Neighbours. “The kids at school would tease me, but as I grew older I realized that that was kind of cool that your mom was on TV”. He also credits his mother, Olga Ruskin, with his interest in people and their stories, because in his words, “the next door neighbour has just as interesting a story as the celebrity.”

Given that he got his start at CiTR, his being famous for in-person, video interviews raises some questions. So why did he switch to video? According to Nardwuar, “When I did interviews, I found that the better sound quality was actually recording them to videotape!” His switch coincided with the early years of the internet, when people realized that sharing video was possible.

This also gave him a realization, “When I got my website in 1996, I could put clips of video on my website and I was like ‘Oh my God! People can finally see what I was doing!’”

At a sprightly 51 years old, Ruskin shows no signs of slowing down and he’s keeping an ever-growing list of the uber-famous he’d like to interview. On that list of woulds and coulds: Paul McCartney, Little Richard and Kanye West.