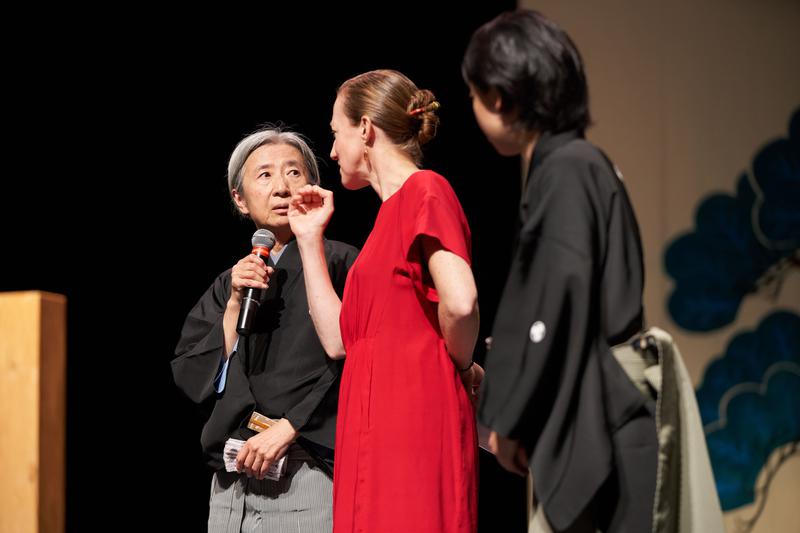 For Noh Theatre, this was a very quick production. Alex Wang

Noh Theatre enthusiasts found themselves a treat at UBC’s Frederic Wood Theatre on September 8. At the cost of $20 — or free for students — Hisa Uzawa and her daughter, Hikaru Uzawa, presented the tale of Atsumori.

Atsumori is one of the 140 plays in the current repertoire of Noh Theatre, a traditional Japanese artform preserved by five schools in Japan. Like most Noh plays, Atsumori is based on the story of a historical character. In this case, the story takes place during the Genpei War and is about an encounter during the Battle of Ichi-No-Tani that led to the death of 16-year-old samurai Atsumori. Last Wednesday, Hisa Uzawa played the role of Atsumori for the first time. She said she felt honored to be able to play the role of a 16-year-old at the age of 70.

A typical Noh play consists of four roles: the shite (main character), waki (supporting role), kyogen (interlude actors) and hayashi (instrumentalists). During the performance, Hikaru and Hisa Uzawa played all of these roles. Hikaru accompanied Hisa as a waki and also undertook charge of costumes. Without any live hayashi or kyogen, the two performed the second act of the play. This act is a scene in which the ghost of Atsumori recounts his death.

The scene begins with live recordings of shime-daiko, otsuzumi, and kotsuzumi drums, and a nohkan flute. The nohkan shrieks and tension builds around the stage for three minutes as audience members wait for the shite’s entrance. Hikaru Uzawa chants on the side of the stage, seated in the position of her waki role. The ominous music sets an atmosphere akin to an eerie dream. Finally, Atsumori enters the stage from the background, where pine trees were lined up from small to large to create distance. Atsumori chants with agony and moves with a grace that barely lifts a foot off the floor. Watching Atsumori move was like watching a doll moonwalk across the stage. Atsumori moved so slowly that one felt like they would miss something if they blinked. The subtlety of movement was the whole story for those who could not understand Japanese in its classical style of prose.

For those not familiar with this style of theatre, thankfully the performance began with a 30-minute introduction to Noh presented by Christina Laffin, professor of classical Japanese at UBC. She explained that Noh Theatre was typically performed with audience members forming an arc and facing two different sides of the stage. These sides were marked by four pillars placed on the stage of Frederic Wood Theatre. This also helped Hisa determine where she was on stage in a mask that rendered her nearly blind. In the back there would be a kirido (door) for waki to enter the stage. Indeed, Hikaru sat outside the pillars and faithfully walked through the imaginary kirido as choreographed on traditional stages. Sometimes she brought props, such as a chair, which she masterfully placed under Hisa, who was able to sit down without looking back. Whenever she brought props on stage, she moved swiftly so as to camouflage her presence. It was as if she was the “palpable absence” called Ma in Japanese aesthetics. The performance ended with Atsumori dropping a sword and walking off into the background with his spirit salvaged.

At the end of the night, there was a 30-minute Q&A session with Hisa and Hikaru through translations provided by Dr. Laffin and Colleen Lanki. They answered why they chose the play Atsumori and explained how the pathos made it more relatable to a Western audience. In response to questions about being a woman in Noh Theatre, Hisa said although she played a male character, Noh actors play all roles, regardless of gender and that at its core, the artform is genderless. She expressed worry over performing Noh on a Western stage, given that only one view of the choreography would be available to audience members.

For Noh, this was a very quick reproduction. Overall it included 30 minutes of Atsumori and an hour discussion about the artform. For Noh enthusiasts, it was a treasure to witness the award-winning Hikaru Uzawa play Atsumori. For those unfamiliar, they were able to receive more context of the play afterwards. Regardless of one’s Noh experience level, it was a historical night that marked Hikaru Uzawa’s first performance as Atsumori and the first presentation of Atsumori in a Western setting.