Review: Old Stock: A Refugee Love Story teaching the importance of love and faith in an inconvenient place 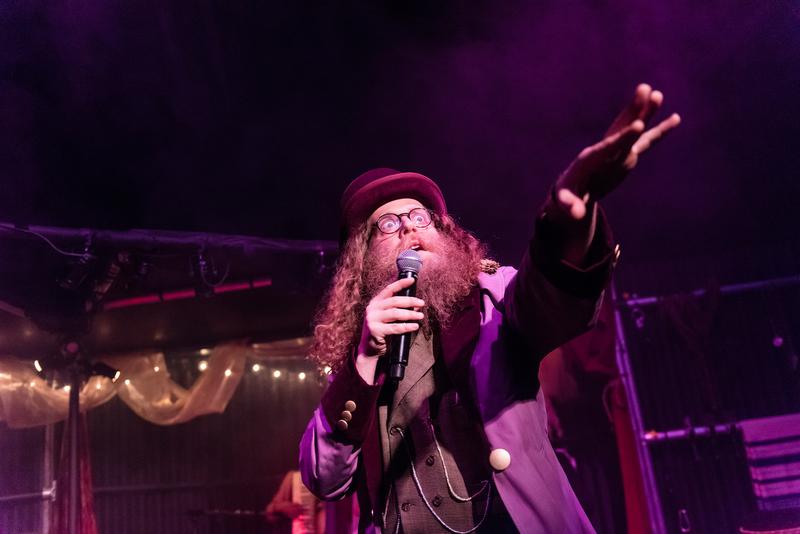 As he emerges from a shipping container labelled “Tehva” — the Hebrew word for life or nature — the Wanderer, played by Ben Caplan, declares that “we all come out of the same box.” He fills UBC’s Frederic Wood Theatre with the boisterous booms of his hoarse vocals overlapping an array of live Yiddish folk melodies.

The 2B Theatre Company production of Old Stock: A Refugee Love Story, presented by the PuSh International Performing Arts Festival, is a powerfully magical homage to Jewish ancestors — a history lesson that leaves you feeling depressed and heartbroken yet full of hope.

Set in 1908, Old Stock follows the true love-story of Chaim, played by Eric Da Costa, and Chaya, played by Shaina Silver-Baird, both Jewish refugees from Romania who meet at Pier 21, an immigration depot on the Halifax harbourfront. Similar
in their survivorship, the naive Chaim and the worldly Chaya differ in their character. The charming Chaim’s awe of his new world is overridden by Chaya’s demanding, yet humorous, condescension. Repeatedly deemed the “chosen ones” by the banjo-playing showman/rabbi/stand-up comedian Wanderer, Chaim and Chaya’s fates are unclear and undetermined.

The actors effortlessly retreat to their seats within the shipping container after many tender dialogues, Da Costa alternating between various woodwind instruments and Silver-Baird delicately drawing a bow across her violin. Audience members are left questioning why the two have been chosen for one another and if their status as “chosen ones” will eventually lead them to any form of solace.

Quite comedically transitioning from speech to song, the Wanderer acts as an omnipresent narrator — breaking the fourth wall to check in on audience members; making snarky comments before impishly leaping out of the spotlight: “If you’re getting too depressed, remember none of this really happened. This is just a story... That’s a lie.”

Old Stock is politically driven, dark, humourous and heart- wrenching. Lullabies turn into love songs and jokes transform into political statements as the stage doubles as Halifax and Montreal, a wedding altar and a prayer site, to chronicle the protagonists’ burdens of typhus, tuberculosis and
trauma. Sexual innuendos, obscene swearing and maniacal shouting bellow through megaphones while the Wanderer stumbles across the stage, making light of the play’s weighty religious and political themes. Much like the Klezmer- meets-rock backing tracks, these comedic interjections momentarily relieve the audience of the play’s brutally emotional plot.

Old Stock does not venture far from its Jewish roots — the tale tells the love story of the playwright’s very own great- grandparents. Nor does it broaden the Jewish refugee experience

Old Stock allows viewers to grieve, consider their present in light of their past and appreciate the complex beauty of a union established through suffering, trauma and faith.