Preview: POV28 is more than just a showcase for final projects 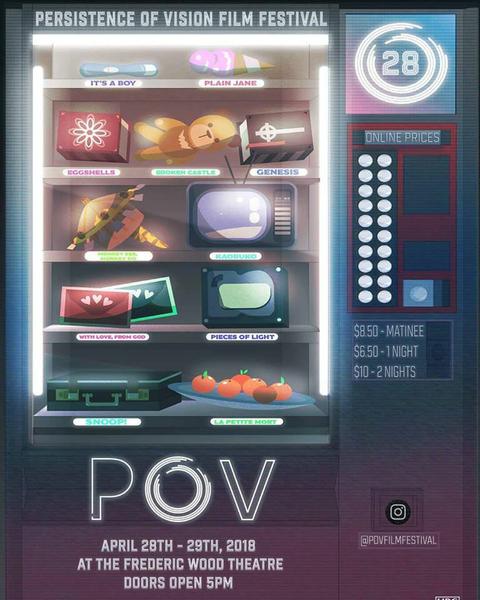 On April 28 and 29, Frederic Wood Theatre will be hosting the 28th annual UBC Persistence of Vision Film Festival, or POV28. POV28 is a student-organized event that showcases a collection of films produced by the third and fourth-year students in the UBC film production program. With twenty-one films on display, this year’s POV explores a variety of genres and topics. While there isn’t one overarching theme, Chelsea Chen argues that the common thread linking these films together is diversity.

“We don't usually have a very coherent theme because all of the films are so different. I would say, if I have to give a theme for this year’s films, diversity might be the word for it.” Chen, a third-year film production student and co-chair of the festival, explained how the student directors boast a wide breadth of cultural viewpoints, and made careful choices regarding the messages they intended to portray.

“I do think because filmmaking takes so much effort, whenever we write a script we're really conscious about our decisions. I think what’s interesting is that the films are very reflective of what we've been through or our living conditions right now.

“A lot of the films are very relatable ... we put our hearts into these projects and we try to say something that we want people to know as well.”

Just as POV is an entirely student-run function, the films feature talent from primarily across campus. The majority of the production teams are composed of students, and each director collaborates with UBC community members in different ways.

“We have key roles on film sets and we give almost all of [them] to our classmates,” explained Chen. “Sometimes there are students [involved] from other departments such as theatre production. This year, we had an interesting collaboration with the School of Music [where] some of our films collaborated with this film score and composing class,” said Chen of the directors that partnered with musicians who made it their final course project to compose music for POV.

“UBC has so many talented people, and film is such a collaborative art, so you will need help with all kinds of things. There's a whole bunch of collaborations that were possible for us and it was such an amazing experience to work with other UBC students.”

“POV gives me a sense of accomplishment. I'm not just talking about awards, or potential prizes or recognition ... I'm talking about how it [is] a milestone for me. It was such a long project and every day you’re making small decisions about the film, even during post-production. Some of the films are personal, and they are all just so important to us,” said Chen.

“When you're looking at the films, you're not only looking at our school work, but also something that will become something bigger. We are the next generation of filmmakers.”