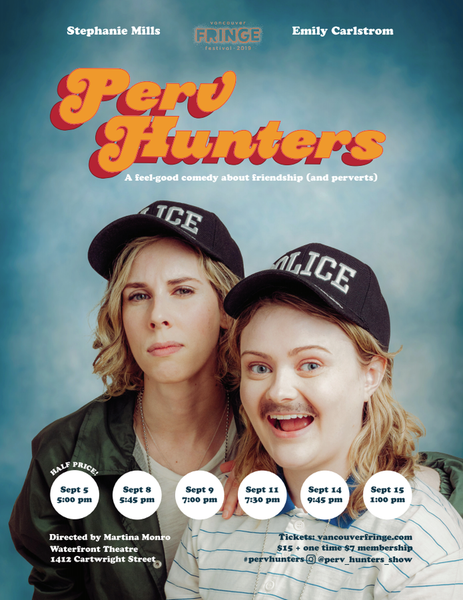 While most people try to steer clear of their local pervert, buddy-cop duo McNally, played by Stephanie Mills, and Rick, played by Emily Carlstrom, actively seek them out in Perv Hunters. Mills, who is a UBC engineering grad, wrote and starred in the 65-minute play.

Yet there’s more to this play than simply throwing every flasher in the can.

Perv Hunters follows the lives of McNally and Rick, self-proclaimed best friends who’ve entered the police force for a single task: to lock up any and all perverts. The term pervert is used loosely, where a mall-Santa mooner is in the same criminal camp as someone who likes to put eyelashes on their cars.

The audience follows them on their journey towards catching the elusive Butt Photocopy Pervert, who, as any good cop show goes, is the person they least expected.

Despite having an actor back out last minute, the performance wasn’t hindered at all, and if anything, made it all the more fun when they brought an audience member on stage to interrogate for suspected perviness.

It’s silly, it’s strange, but the play somehow works? The comedic timing of both the writing and actors on stage made the jokes hit and had the packed audience rolling with laughter in their seats.

The second half did lose some of the punchy energy it had at the beginning, but the actors were able to get it back for the very ending.

The buddy cops in particular drove most of hilarity on stage, but there were also two notable supporting roles that stood out. Both Dianne, a member of Flashers Anonymous, and the Hawaiian-shirt-wearing Perv Patrol Sergeant were excellent characters to add to the ensemble.

What prevents Perv Hunters from turning into a contest for how many times someone can say pervert in a play is that it actually has a nice thread about the dangers of police officers dehumanizing their perps. Even those who like the smell of hot garbage on a summer day deserve to be treated like people, which the play does a great job of highlighting without becoming preachy.

Of course, the relationship between Rick and McNally also was earnest in the purest definition of the word, making the buddy cops easy to root for.

The story itself is admittedly formulaic. The only real character progression is when McNally calms down a little on the whole perv-hunting obsession, but that’s also a part of why the play works.

Overall, if you leave Perv Hunters without laughing at least once, then you’re probably a pervert — and that’s okay?