Review: Bears is an uncensored battle cry against pipelines 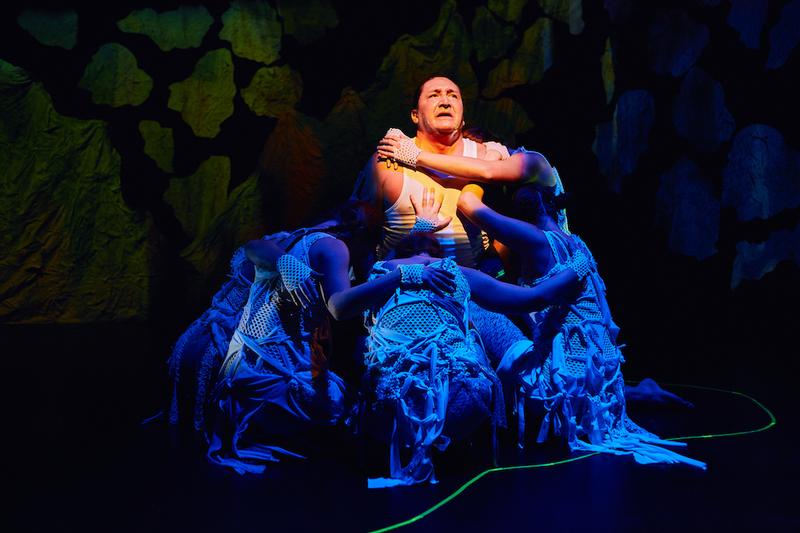 What does it mean to be in bear country? For Matthew MacKenzie - playwright and director of Bears, bear country becomes the supernatural backdrop for one man’s journey to understanding his identity, his politics, and the importance of protecting the land that shapes it.

The story is told through third person by Floyd (Sheldon Elter) himself, who we first meet on the run from the RCMP and Kinder Morgan bounty hunters. Floyd's journey takes him from the oil rigs of Alberta where he is formally employed, to the the wilderness of British Columbia. The reason is revealed to us slowly, but feels irrelevant amongst lessons from his mother (Christine Sokaymoh Frederick) and the industry related tragedies of his childhood that are woven throughout the play. It is no accident that this story about pipelines must also be about Indigenous land rights. As Frederick notes at the reception before the show, “What each of us needs to understand, we’re not at ‘reconciliation’ yet, we’re still just at the 'truth' part”.

Bears has many strengths. Its script is an unapologetic and uncensored take on Canadian politics and industry, and each component of the cast does an amazing job supporting it. The dancers change the simple set into any environment by transforming themselves into everything from wild tiger lilies to the waves of the Pacific ocean. Elter is a powerful narrator in Floyd and Frederick delivers her maternal lessons without feeling forced. Equal parts hilarious and heartbreaking, Bears will have you standing on your feet and chanting.