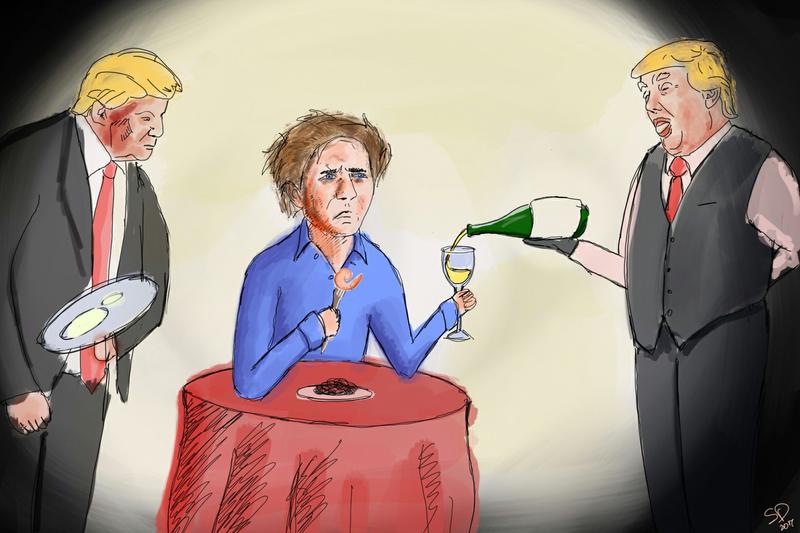 As soon as I made the reservation, I felt I had implicated myself in a political cause: I was going to give my hard-earned dollars to the billionaire reality TV star, President Donald J. Trump, in exchange for food.

Located in Trump tower, the restaurant in question is Mott 32 — The Trump Organization’s culinary contribution to Vancouver. The food is not dissimilar to its long-time owner: overblown and overpriced.

Mott 32 began in Hong Kong before making the jump to Vancouver earlier this year, opening in January. There was much for me to consider as I patronized this restaurant – firstly were the ethical implications of supporting a business that is directly tied to a man like Donald Trump. Giving more money to a billionaire and his organization — one which I am so vehemently opposed to — is a major psychological hoop to jump through. Also, I, like most students, can’t afford to dine at such a place, regardless of whether or not it has questionable affiliations.

Why did I go to Mott 32? To see if Trump ran a restaurant as bad as he runs a country.

To get to Mott 32, I had to make my way through the Trump Hotel’s shining silver lobby. Outside giant silver letters spell out the namesake of the hotel – TRUMP. Those shining letters spell out a word that is synonymous with things like “racism,” “misogyny” and “homophobia,” but tonight, for me, those letters spelled “dinner.”

The most immediately striking thing for me was the décor of the restaurant. The whole room looked like it had been cut out of black marble. The most noticeable tones were black and gold, and everything had a muted gleam.

The customer service was easily the best part of the whole experience. It is not often that I am referred to solely as “Mr. Wheeler” and that felt good, but was I falling into a trap? At the end of this meal, would I be scorning the alt-left and ranting about defiant athletes?

One glance at the menu showed that it was for the bougiest of bourgeoisie. There were dishes ranging from $25 to $500, most of which were on the pricier side. I flipped through it until I saw a section of that was more generous to my wallet, the rice and noodle selections.

My server suggested the “Mixed Seafood Fried Rice, Golden Conpoy with Black Garlic” and I took his recommendation, destroying the budget I came in with. I waited for my food, contemplating how much of a fool I was. This gave me time to observe the dining room – it was completely empty save for one wealthy family lavishing over the pricey food and drink.

I was given a complimentary amuse bouche by the waiter while my food was prepared. On a small plate sat a cauliflower and Brussels sprout skewer coated in a light chili sauce. It was alright and only enjoyable because I didn’t pay for it.

Waiting for my food was wrought with reflection.

The irony of a luxury Chinese restaurant was not lost on me, given Trump’s disdain for the Chinese economic policy during the campaign and his fondness for Chinese food. At this point I had never considered restaurant-going as a political act, but I felt by my being there I was making myself a subject to the GOP. I wanted to be done as soon as possible

The food finally arrived as a heap on a fine black plate. There wasn’t much to the presentation of the dish, it was merely piled high for your capitalist consumption – you pig. The first bite was met with a lot of anticipation, and I was very much disappointed. At the very least, one would expect the food to at least taste expensive, which it didn’t. I’ve had better Chinese food at Peaceful restaurant for a quarter of the price.

Even though I could tell the ingredients were of quality and prepared well, the experience would not be worth more than $12 at any casual food joint. A second server came to check up on me and vouched for the dish as well, calling it his favourite. This made me suspicious. Was this a Trumpian tactic to charm me into a far right sympathetic state? Nevertheless, I took most of my meal home and left the restaurant, hiding my face as I once again passed beneath those silver letters.

The entire meal cost me roughly $60, and that’s with the fried rice, a beer and a tip. My hard-earned cash went into the pockets of the most powerful family in the world. I took out a student loan for fuck’s sake, and I’m doing this?

My meal at Mott 32 was the most politically and morally questionable meal I’ve probably ever had – if any wall had been built, it was built to shield opulence from flavour. Spend your money at more casual and cheaper places, unless of course you were given a small loan of a million dollars.