Roots in Two Villages an Ocean Apart: Being Musqueam and Chinese 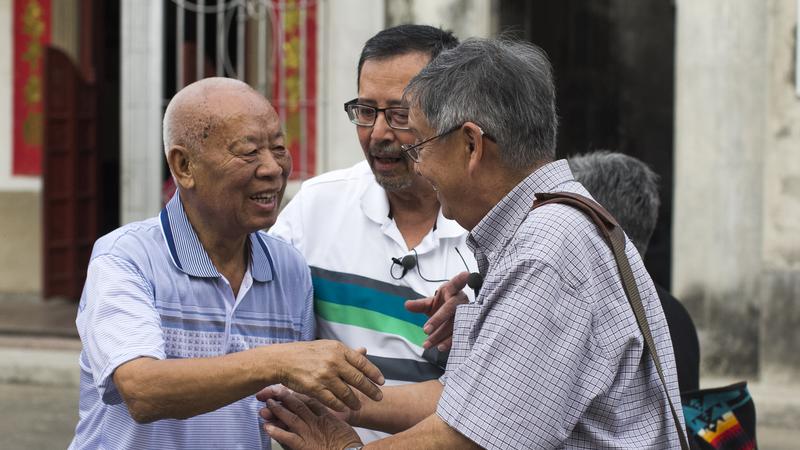 Still from the documentary All Our Fathers Relations (2016). Courtesy of the Museum of Vancouver.

On Wednesday, May 26, The Chinese-Canadian Museum (CCM) and The Museum of Vancouver (MOV) hosted a virtual event titled Roots in Two Villages an Ocean Apart: A Conversation with Elder Larry Grant. Elder Grant is of mixed Chinese and xʷməθkʷəy̓əm (Musqueam) ancestry and is a knowledge keeper, hən̓q̓əmin̓əm̓ language instructor and leader of the Musqueam Nation.

The event was facilitated by Exhibition & Program Manager at the CCM, Sarah Ling, and Indigenous Programs and Community Engagement Coordinator at the MOV, Jasmine Wilson. The panelists were members and leaders within the Chinese and Musqueam communities respectively. The event was moderated by Wade Grant, nephew to Elder Grant and Intergovernmental Affairs Officer to the Musqueam Nation. He is also a board member for the First Nations Health Council and the Covenant House. The relation between Elder Grant and W. Grant allowed the event to be less of a panel and more of a fluid learning opportunity.

The evening opened with a clip from “All Our Father’s Relations” which documents Elder Grant and his family’s story growing up as Musqueam and Chinese and follows them on their journey in 2013 to their father's ancestral homelands in Guangdong, China.

The clip outlines Elder Grant’s background: Musqueam on his mother’s side (Agnes Grant) and Chinese on his father’s side (Hong Tim Hing). Elder Grant’s parents met because many migrant Chinese farmers worked on Musqueam land at the time.

For Elder Grant, self-identifying was “always a challenge.”

And, because Elder Grant did not speak Cantonese, he was distanced from his Chinese heritage.

“As an elder trying to reawaken our language here in Musqueam, a question that always popped into my head [was] how can you be who you say you are if you don't have a language to identify yourself with?”

“The complexity of my story is brought about by legislation. All of the legislative acts that denied Indigenous identity and Chinese inclusion was all created by Canada,” Elder Grant said.

Elder Grant blames the Indian Act and its colonial mission for imposing a “racial hierarchy” that created tensions among mixed and non-mixed heritage Musqueam youth.

According to Elder Grant, the racial hierarchy “gets to the point where you say, ‘I want to be the hero and that hero is a white man.’”

As I watched the documentary, I couldn’t help making connections to my own life. This feeling of being ‘in-between’ is unfortunately one that I felt as well. As a first generation Afghan-Canadian, I often wonder which part I identify more with; which part should I identify with more? I can only hope that one day kids do not feel like they should be anything but what they are.

As documented in the film, Elder Grant and his family went to China for the first time in 2013, prompted by the knowledge of their father’s village’s imminent demolition. Elder Grant described the moment he and his family stepped through the arches of their ancestral village as a moment of reflection.

“It was like ‘Wow, my dad was a boy here. This is where my grandpa comes from,’” Elder Grant said.

Reconnection with the land came easy, especially when the embrace of their Chinese relatives felt like being welcomed home – a home an ocean away. Elder Grant and his family are not just Musqueam or just Chinese, they are both. Their experiences and insights are reflective of the many varied stories shared during AAPI Heritage Month.

In truth, the evening made me miss my grandmother for she, like all our elders, held the key to our cultural history. And yet, I am grateful for having the opportunity to learn from not just my loved ones, but the loved ones of others.

“That tiniest little moment that becomes such a huge thing in your life – you can’t replicate it,” Elder Grant said.