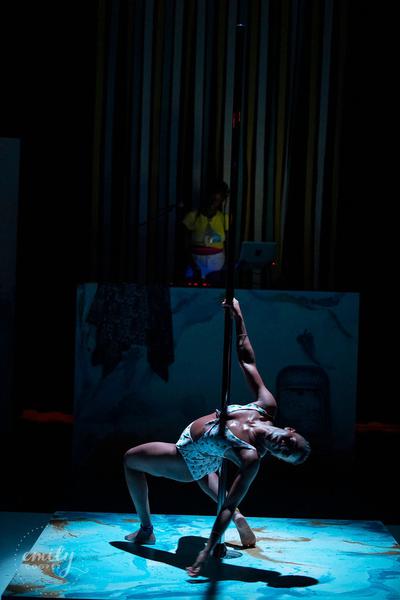 The poster for She, Mami Wata & The Pussy WitchHunt. Emily Cooper/Courtesy Mariam Barry

She, Mami Wata & The Pussy WitchHunt premieres this week on the West Coast as part of the PuSh International Performing Arts Festival.

In a written response to The Ubyssey, Mariam Barry, the show’s associate producer and a UBC alumna, shared her excitement for the premiere.

She believes the show is important because it presents the often subdued voice of Black Queer folks front and centre.

“Celebrating those voices is important for all of us, and for Vancouver which has a culture of minimizing its Black presence,” she said. “It's therefore incredibly special to have this gripping Black-centered work open as part of the PuSh Festival.”

For her, the show is also an affirmation that her community exists.

“I’m most inspired by art created by people of colour,” she said. “I know this is true for me because I see myself reflected in those stories. As a Black artist, to see myself represented in art is to affirm that I exist ... that our experiences matter.”

These neglected stories are essential elements needed to start a discourse that addresses the issues surrounding the racial and 2SLGBTQIA+ violence. For Barry, the takeaway for the Vancouver audience in general and the UBC students in particular is to connect themselves to narratives and lives that exist outside their immediate environment.

She added that the playwright d'bi young anitafrika is a force to be reckoned with.

“She is an iconic voice of Canadian theatre,” said Barry, describing d'bi young anitafrika’s performance as a surreal experience wherein she shapeshifts on stage, slipping in and out of characters with ease, while keeping the rhythmic language of her storytelling alive.

d'bi young anitafrika’s work is reflective her intersectional identity. As a Queer Black woman, she writes not only towards her own liberation but inspires other to do the same. Her work speaks to the Queer, the Black and the diasporic audience and anyone looking for meaning.

“Her work is reflective of her personal truth and that is something we can all relate to,” said Barry. “That’s why her work is so powerful.”