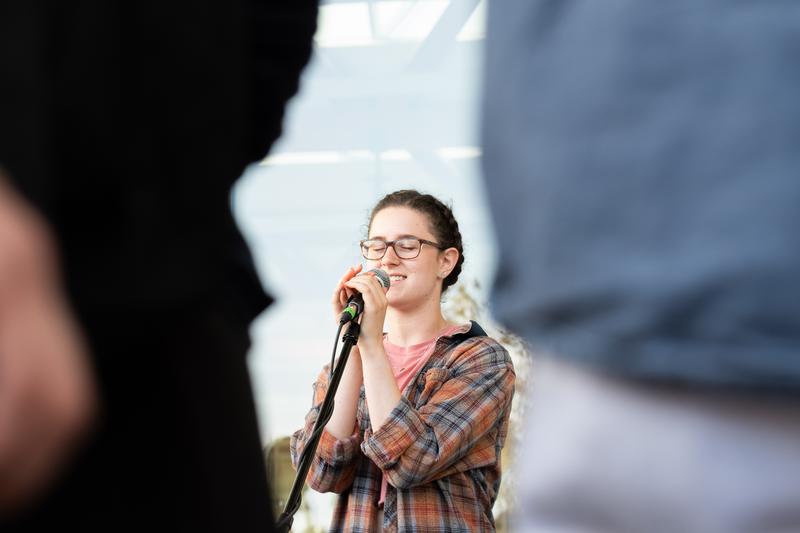 ROTN Secret Show was an idea by BVP that aimed to gather music-lovers by only word of mouth. That means no online advertising, no Instagram story promotions, no Facebook event invites. Courtesy BVP

Standing on a rooftop before sunset while listening to live music, munching on free snacks, and chilling with friends was an hour that eased nerves from the brewing tension of the upcoming school-year. Blank Vinyl Project (BVP) decided to kick off the year by hosting a “secret show” on the roof of the AMS Nest. While Imagine Day can be hectic, the ROTN (Roof of The Nest) Secret Show provided an easygoing space for music-lovers to relax in the cosy Rooftop Garden.

ROTN Secret Show was an idea by BVP that aimed to gather music-lovers by only word of mouth. That means no online advertising, no Instagram story promotions, no Facebook event invites.

To BVP Events Director Camille Brown’s surprise, the word of mouth based show had a great turnout,

“It’s our first time doing anything like this,” said Brown, “We’re really happy with the turnout! Having something that’s completely offline really builds community and having it be word of mouth is kind of something special in this day and age. It doesn’t happen that much anymore.”

Attendees were able to unwind and enjoy live music at the secret show hosted in the sun-drenched Rooftop Garden. The place was lively with friends or lone individuals spread out, basking under the sun or chatting in the shade, while crunching on provided chips and popcorn. When music finally started, suddenly felt packed as all attendees moved towards the front of the stage to get a close view of the performers, forming a standing crowd of enthusiastic spectators.

From the soft tunes of trumpets and flutes to the bumping bougie of fast beat bands, we were able to enjoy a variety of original music from girlsnails, Circle of Care and solo artist, Chris Ho. girlsnails commenced the show by blessing our ears with sweet and steady indie rock that emulated a warm summer breeze — their music well reflecting the chill, easygoing vibes of the evening.

Circle of Care sped up the tempo and had the roof hopping with their groovy, boogie rock and electric stage presence.

Chris Ho calmed the party back down with soft yet emotionally powerful slow folk that reflected the mellow intimacy of the ROTN Secret Show atmosphere. As the final act of the night, Ho’s tunes prompted bittersweet feels while summer vacation had just come to an end. However, in this upcoming school year, we’re anticipating more BVP events like ROTN to satisfy our casual live music crave.

girlsnails band members expressed their excitement about the show and the fresh feel of performing on a rooftop.

“It’s really cool to play on a roof,” said Michael Robertson, one of the guitarists of girlsnails, “I’ve never done that before.”

Lead vocalist, Laura Kim, was previously a member of the BVP Executive Team for two years and expressed her pride for the student-run music organization’s new event.

“This is the first show that they’ve done on the roof like this,” said Kim, “I’m very proud of where they’ve come. I really, really enjoyed playing at it. I was very happy when they reached out to us. It’s very cozy and intimate.”

In combination with the easygoing atmosphere and charming rooftop garden location, what makes ROTN truly special is the secrecy attached to the event. While also not advertising online at all, Events Director Camille Brown states the BVP team decided not to tell anyone who was playing. With the show being word of mouth and the line-up completely secret, there’s a meaningful rapport among the crowd of music enthusiasts minimized to those that simply seek to support the live music community and casually jam out with friends.