Something in the Water makes a splash at Vancouver Fringe Festival 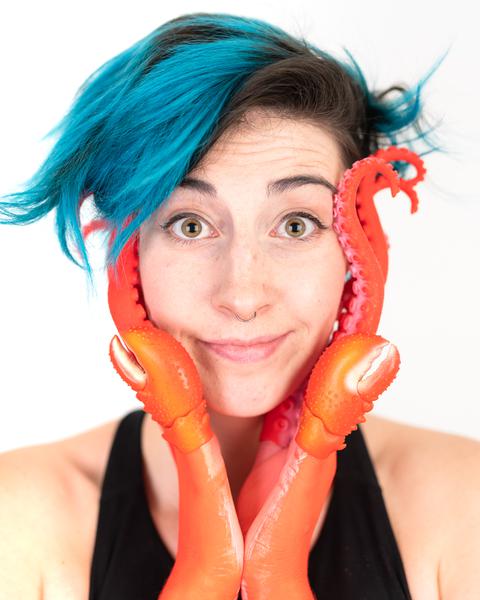 “Since I have been out, now, this is my first show about that experience and about being Trans and non-binary," said Grummett. Courtesy Scantily Glad Theatre, photo by Kenton Doupe

When S.E Grummett graduated from an American BFA theatre program, they weren’t finding roles that reflected their identity. “There was no parts for people like me and for a long time, I thought ‘oh, I’m a bad actor because I can’t be a good woman,’ and so I started Scantily Glad Theatre so that I could write parts – at the time I wasn’t out – for people like me,” Grummett said in an interview with The Ubyssey.

“Since I have been out, now, this is my first show about that experience and about being Trans and non-binary.”

And what a show it was. After watching Something in the Water, the word that came to my mind was: Seen. Walking into the cozy Revue Stage theatre on Granville Island, I barely registered the signs warning of nudity in the show. The nudity itself was not hard to notice, however, when the lights came on, Grummett was centre stage, nude and screaming.

Starting off with no layers of clothing between them and the audience set the tone for the rest of the show – Grummett held nothing back. Between dates with Barbie and Ken and breaking news of squid attacks, Grummett bared much more than their body to the audience.

“[The show] is based on my experience of coming out as Trans and feeling like, “Does my Trans-ness, does my gender identity make me a monster? Does it make me unlovable? Is everyone going to hate me or think I’m disgusting?”

“And so, in the show, I turn into a giant squid monster,” said Grummett.

Something in the Water poster for the Adelaide Fringe Festival. Courtesy Scantily Glad Theatre, poster by Chris Stache

While at first, the public reacts poorly to these squid-transitions, as more breaking news reports come out, society begins to understand that these squid-monsters might just hold the power to save the world.

I know, it sounds a little fishy. But when you look past the tentacles, the show transforms into a highly-personal story of self-understanding. While I’m sure Grummett’s process of coming to terms with their gender identity did not involve underwater pseudo-therapy sessions with Barbie, there were plenty of elements of the show that probably were part of their journey.

Of course, it’s funny to watch this squid-monster disguise themselves in order to be allowed entry to the two available washrooms, but when you substitute this squid-person for someone whose gender is beyond the socially-accepted gender binary, this scene takes a tragic tinge to it.

When asked about how puppetry plays a role in their performance, such as the tentacles and webbed hands, Grummett replied that it can be used as a disruptor to the perceived-beliefs about their identity based on physical appearance.

“... My body carries with it perceived genders on stage, and so [with] puppets and masks and clown, I’m able to move beyond that. It’s almost like a way of doing drag for me. I can be a squid-monster, I don’t have to be feminine or female or a woman perceived by the audience,” said Grummett.

“For Queerdo-weirdos, this is a really empowering show … Shows with Queer characters and Trans characters that aren’t made by Queer Trans people are often fixated on trauma and pain. And that trauma and pain is real, but this is a show that’s a comedy.”

For a show about gender identity and socially-constructed binaries, at the heart of this performance lies laughter. When faced with a world that gets so hung up on who gets to use what washroom, it seems strange not to laugh, and that’s what this show is all about. For anyone who’s ever questioned why things have to be the way they are, and for those who hope for a more inclusive future, this show will make you feel seen. Even though Grummett was the one in the nude, by the end of the show, I felt like someone had peeled back the layers of my clothes and taken a good, long look at who I am. Watching this performance made me laugh, made me gasp, but most importantly, it made me feel seen.

S.E Grummett put it best: “This is a show that’s empowering. This is a show that you’ll leave waving your tentacles proudly. I hope that you are seen and that you can have a laugh at how absurd the binary is, and how absurd it is that we’re expected to fit into these two very rigid binaries.”

To find events, including Something in the Water and more, and showtimes, check out Vancouver Fringe Festival.