Esther Shalev-Gerz: The artist behind The Shadow 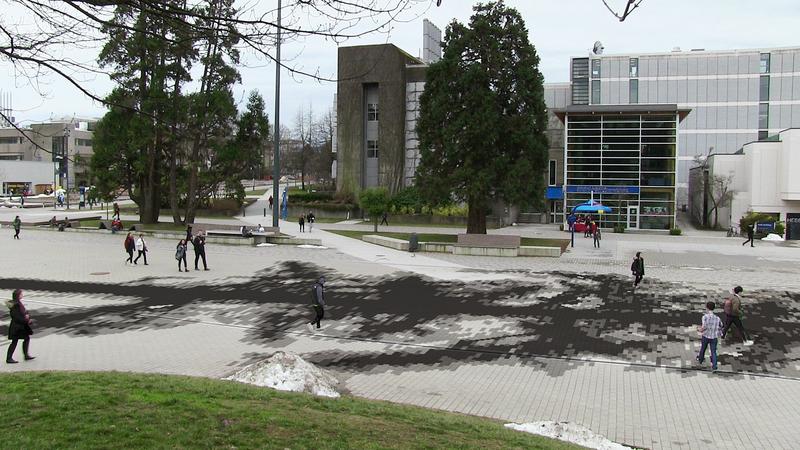 Most artists believe their job is to create art in a space. But for Esther Shalev-Gerz, her job is to highlight the art that’s already there.

Born in Lithuania, Shalev-Gerz is a Paris-based artist whose public art pieces have been installed in France, Sweden, Switzerland, Germany and numerous other countries across the globe. Her newest project is The Shadow, which is set to be installed in front of the Nest this month.

The Shadow is a daunting design: it consists of the darkened image of a Douglas Fir tree imprinted over 24,000 bricks, which will be laid down for a total size of 22 by 100 metres.

Shalev-Gerz, who has been regularly visiting BC for 35 years, said the piece is inspired largely by the region’s natural beauty.

“As I born in Lithuania, there is something of the nature there that kept me coming,” emphasized Shalev-Gerz. “Coming once or twice is one thing, but persistently having it being part of my life is something that is absolutely — I cannot live without it.”

Shalev-Gerz’s previous works often examine relationships within spaces, tying the areas that they’re installed in with political, regional or cultural dialogues. Her Monument Against Fascism in Hamburg deals with the region’s authoritarian past, while First Generation in Botkyrka, Sweden addresses the complexity of immigrant diasporas.

With The Shadow, Shalev-Gerz hopes to highlight the profound history found within BC’s wilderness — a story that is at once ancient and unheard to her.

“As an artist, you are trying to broaden the field of expression by including new things,” she said. “The new things are of course the things that are here, but never named.

“I wanted to make this new history. The history of the trees.”

Unlike many of her previous works, The Shadow is completely horizontal. Shalev-Gerz said this, along with the plaza’s positioning near the Nest and the nearby mound, makes the proposed piece a powerful exercise in contrast.

“It’s horizontal while we are vertical — we are walking on it,” she explained. “Because it’s physically available to you, you can choose to sit on a certain branch.”

Shalev-Gerz said viewers will be able to see the entirety of The Shadow from the vantage point of the nearby mound.

“People who studied at UBC always told me ‘oh, I was always spending time on the mound.’ They were really touched by this,” she said.

Shalev-Gerz also enjoys the piece’s proximity to the newly-completed Nest, saying the building’s modern nature — juxtaposed against the imprint of a tree — inspires reflection and thought.

“It’s so beautiful, it’s so new and it’s so contemporary,” said Shalev-Gerz. “I hope that The Shadow will do the same thing — that it will enlarge this space and the history on how we use materials, how the materials enhance that space.

“I was really lucky that they assigned this place for me.”

Shalev-Gerz was originally selected for the project following her 2013 exhibition at the Berkin Art Gallery on UBC campus. While The Shadow is being constructed using earmarked private funds, two widespread misconceptions are that the piece will be funded by student tuition and that it will only be visible from the vantage point of the Nest’s roof. They have fuelled negative backlash to the project from students.

On her scheduled artist visit on November 14, Shalev-Gerz hopes to engage those students directly.

“I would love to talk with the students and really to have a good discussion about that,” she said. “I do a lot of art in public space and every time, we have a discussion.”

Ultimately, that’s what Shalev-Gerz aims to create. For her, public art is a way to evoke conversation — whether it be with the artist, the architect, the community, the students or the space itself.

“If we all want to talk together, this is the only thing that matters,” she said. “This is what influenced me as an artist and what I hope will influence them.”